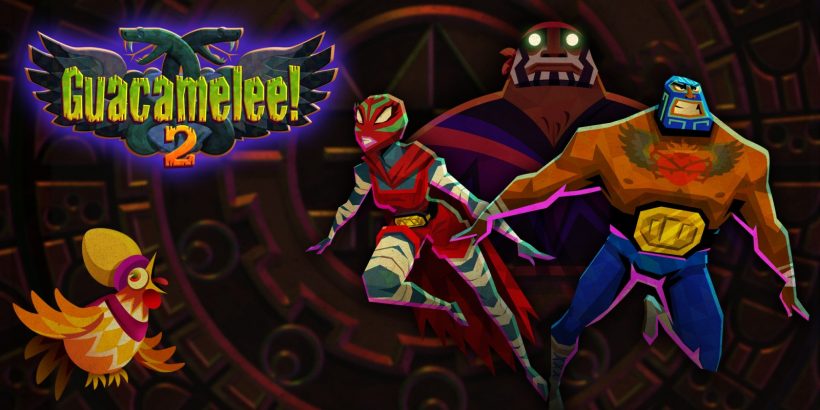 Guacamelee! 2 starts off with a bang – or rather, a boss fight. Taking direct inspiration from classic Metroidvania Castlevania: Symphony of the Night, Guacamelee! 2 delivers a swift recap of the first game by revisiting the final boss Calaca. Hell, it even snags a few of the same dialogue lines from Symphony of the Night. This particular reference might be a little too on the nose for some, but it’s nevertheless a superb way to bring new and returning players up to speed whilst also setting up the general tone of the game.

Skip ahead a few years, and we find our hero Juan living a blissful, albeit indulgent life with his wife Lupita and their two children. Their content existence is suddenly shattered by a new evil luchador known as Salvador. Juan travels across timelines to the ‘Darkest Timeline’, where he and his wife were killed by Calaca, who was then subsequently killed by Salvador. The story sounds a lot more complicated than it really is, but I’m truly thankful for its inclusion – it gives a lot more depth to the otherwise fairly basic premise of exploring the land and beating up bad guys. That said, if you’re not particularly bothered about the storyline, you can largely ignore it and focus on the stellar gameplay itself.

If you’ve played the original Guacamelee!, then you’ll know pretty much what to expect here. It’s more of the same, which is certainly no bad thing – after all, why fix what isn’t broken? Juan leaps around the environment with grace, and as you become more acquainted with the combat mechanics, you’ll be dishing out combos left, right and centre. Collecting health upgrades as you progress is once again a big part of the experience, and you’re also given frequent opportunities to gain additional abilities and change your outfits.

The platforming segments in particular have been vastly improved from the first game. Juan now has the ability to grapple onto floating hooks, which propel him into whichever direction you happen to be facing. It’s a fantastic way of not only speeding up the general gameplay, but also adding a great deal of verticality, something that was certainly less prevalent in the first game. With this in mind, the overall difficulty has also been upped quite significantly – it’s clear that DrinkBox Studios made this game under the assumption that you’ve already played the first (which you should absolutely do, by the way).

Interspersed throughout the environment are dedicated beat-em-up sections in which you must fend off roughly 3 – 4 waves of enemies, or one big enemy. Much like the first game, these are remarkably well made, and the sheer amount of abilities available to you as your progress is phenomenal. Landing a few punches into an enemy before hurling them headfirst into another group of foes never gets old. If I have any complaint about the combat, it’s merely that these sections show up a little too frequently for my liking – there are very few moments of reflection, which grew slightly tiresome after a while.

That’s just my personal taste, though – Guacamelee! 2 is fundamentally a phenomenal example of how to nail the Metroidvania genre. It’s got style, substance and humour in spades, and the gameplay is simply wonderful.

Guacamelee! 2 is a brilliant continuation of Juan’s story. It’s largely more of the same, but when the gameplay and visual design is this good, there’s little need to change it. Yet another fine example of the Metroidvania genre.