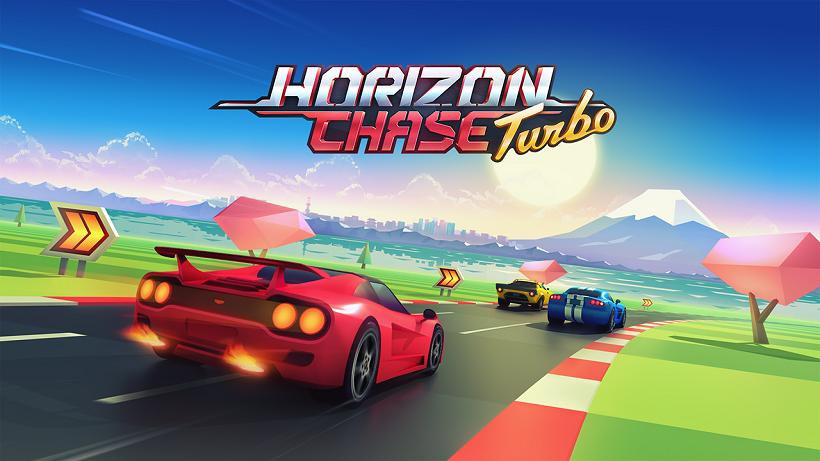 Race to the Horizon

At first glance, Horizon Chase Turbo looks like an attempt to recapture the magic of the original Out Run game from the 80s but with retro-looking 3D graphics. Yet the comparison is not an apt one, for Horizon is a pure arcade racer that pits you against 19 other racers across locations from around the world.

There was a time when arcade racers were everywhere – in part because simulating a real car in a believable way was still some way off – now though, your options for light-hearted and more forgiving video game racing experience leans more towards the item based karting variety. Therefore, Horizon stands out as it does. Whilst the core gameplay is nothing new, its execution sets it apart from its fore-bearers. The pastel colours give it a distinctive look that continues to charm during your globe-trotting adventure. The cars are often modeled on real cars but altered just enough to avoid paying a licence fee (or being sued), yet when combined with the multiple colour choices have an individuality to them; especially the “Cable Guy” car.

The real visual star here though is the exquisite titular horizon that adorns each race. You’ll travel from standard fare racing locations such as San Francisco to the less visited Acropolis of Athens in Greece. What’s more these backdrops become increasingly accompanied by extremes of weather, with the latter location looking quite apocalyptic with its all-consuming lighting storm. Regardless of the location, the moving horizon is a treat to view as you try to overtake your many opponents at speed, although be sure not to crash into the other visual elements on the side of the race track, such as a giant lion statue.

The main aim of each race might still be to come in the top three (although preferably first) but there are a couple of other elements to consider. During the race, you can also collect blue coins which adds to the currency you receive, and if you collect all the coins in a given race and come first you also receive a “Super Trophy”. The other thing to consider, which is more pressing in the race itself, and that is your fuel level. This varies between cars, but you’ll soon find yourself searching out the fuel pick-ups in each race necessary to continue. It can be a bit frustrating, but it does add an extra challenge to a race. There are also special races that are unlocked that reward you with upgrades that affect all your cars, such as fuel level, acceleration, etc.

There are a dozen countries that you will travel to each with multiple locations and races with each one providing you with a sense of speed and excitement. The journey will be challenging, but the satisfaction of pipping someone a second before the finish line is exhilarating.

Horizon Chase Turbo is an unexpected surprise. A quality arcade racer that builds upon the groundwork of the classic 80s racers and brings it up to date with dazzling visuals and engaging racing action.