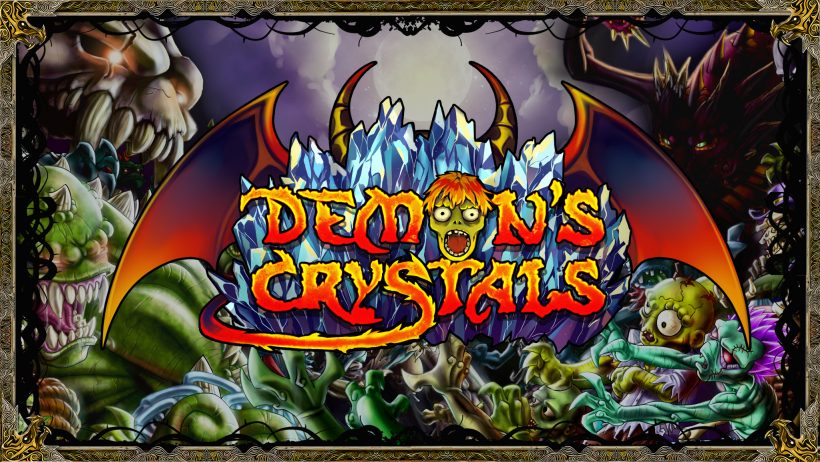 Demon’s Crystals is an arcade style, top down shoot-em-up which sees you face off against hordes of the undead and many other creepy ghouls. The initial presentation does look somewhat questionable but if you peek behind the curtain you’ll find there’s a substantial adventure littered with some great multiplayer options.

You play as one of four characters, each one appearing in a different colour on screen. The action can get frantic at the best of times with waves of bullets coming at you from all directions, so making a note of your own colour is probably a good start.The game has great multiplayer options and one of the key features of the game is being able to play all but one of the modes with a group of friends locally.

The main Arcade mode is split into three different areas of ten stages each. Within each stage you’ll get two or three waves of enemies. The objective is either to collect a set number of crystals or to defeat a horde of enemies – and most of the time it’s both. Firing your weapon is done by pointing the right analogue stick in whichever direction you want to shoot and the left analogue stick is your movement. You’ve got unlimited ammo and lots of opportunities to change your shot style by picking up the power-ups that randomly generate.

The difficulty curve is a little all over the place – some stages have three rounds where you’ll be faced with defeating a large amount of enemies and collecting crystals, whereas a later stage may have just two rounds of defeating a low amount of weaker enemies and little to no crystals. This doesn’t ruin the experience entirely but it does make it difficult to persevere, especially when you die on the third round and have to repeat the first two all over again.

You can enjoy the entire game as a single player experience or hop on with some friends in local co op, which is where you’ll find the most fun is had. With six different multiplayer modes (not including the main Arcade mode) there’s enough variety to suit all players and feed that competitive itch. You’ve also got a survival mode which tasks you with staying alive as long as possible through an endless wave of enemies.

I noticed very little difference visually between handheld and docked mode, it’s not the greatest looking game but certainly not the worst. There were times when there’s traps or hazards on the floor which can be difficult to see due to the amount of chaos on screen so making these a little more visible is definitely something they could work on.

Demon’s Crystals packs in some addictive multiplayer options, varying difficulty settings and an engaging Arcade mode which you can enjoy by yourself or with a group of friends. It can get a little confusing with the amount of enemies and bullet fire on-screen at one time as to where certain hazards and even your own character’s are, so pay close attention!