Before the advent of the 3D platformer, it was the two-dimensional variant which ruled supreme. You could say with some confidence that the Super Mario series are the best examples of the genre, with Super Mario Bros. 3 AND Super Mario World still revered over 25 years after release. Many years after Super Mario 64 and Super Mario Sunshine, Nintendo returned to the platforms’ roots in the New Super Mario Bros. series, but these titles were never really anywhere close to the quality of the NES and SNES masterpieces. 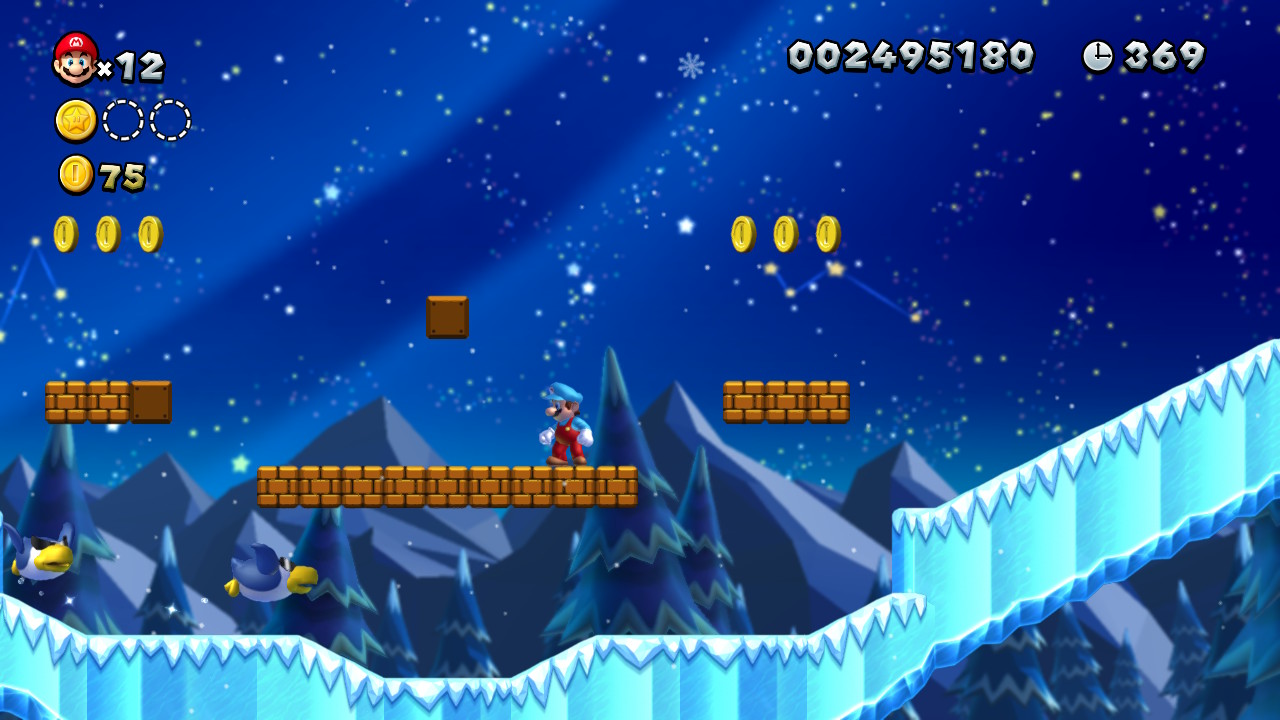 New Super Mario Bros U was different. It takes almost everything which made those two titles such masterpieces and merges them together with a nice splash of HD visuals to boot, and this Switch release gets the “Deluxe” treatment with a few little extras thrown in for good measure.

But first, you’ll want to know what New Super Mario Bros. U Deluxe is about, right? Well, if you’ve played any proper Super Mario games before (not you, Super Mario Bros. 2) then you’ll know that Bowser has been naughty (again) and abducted Peach (again) and it’s down to you to find her across a smorgasbord of levels, encompassing a huge variety of climates. Along the way, you’ll be challenged by numerous enemies and jumping and running (or swimming) across some impeccably designed (if sometimes fiendish) levels. At the end of each level, you’ll reach a flag which then allows progress to the next section on the world map. Besting the Koopaling for each world will see you then progress to the next zone. 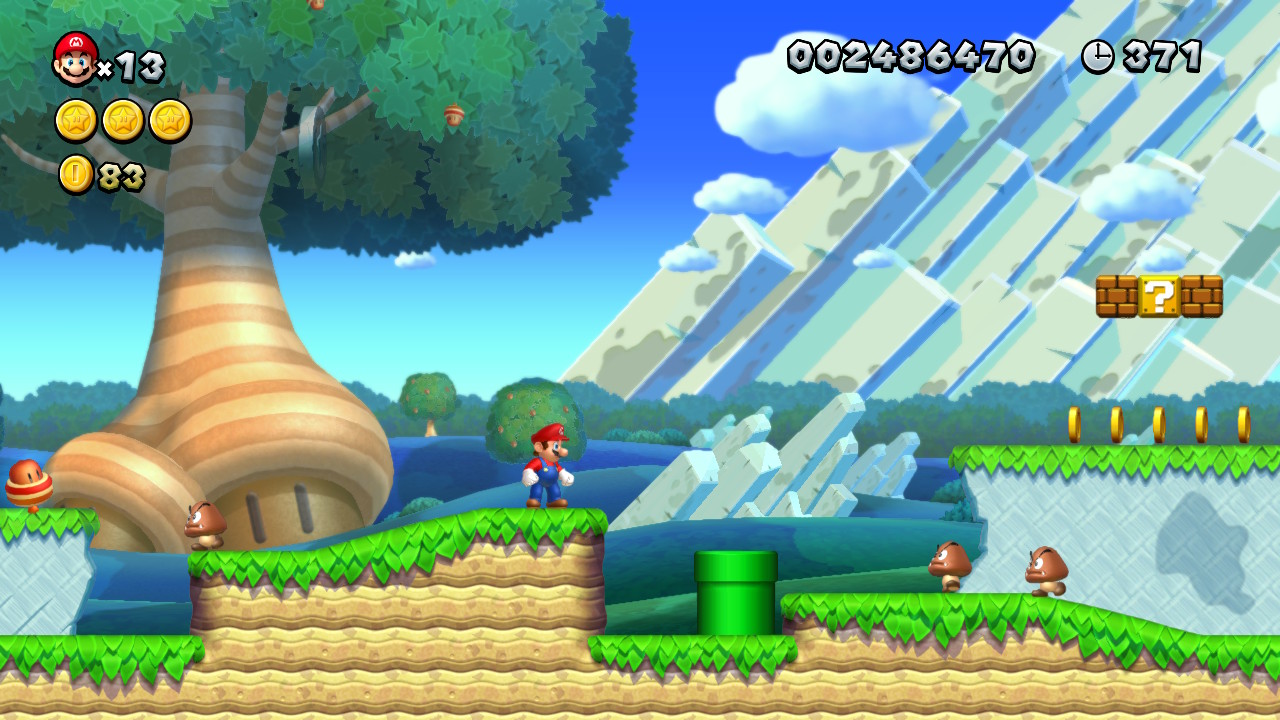 Your choices of character for this adventure are, as ever, Mario and Luigi backed up by Toad. In this Deluxe version for the Switch, you’ll also be able to use Toadette, as well as Nabit – who was previously only playable in the New Super Luigi U DLC, which is also part of this enhanced package.

Those new characters will give you a different way of playing; Toadette can jump with more precision than the other characters, ensuring that her selection screen is labelled “easy” and she also has the use of a unique power-up in the Super Crown. Use of this will transform her into “Peachette”, a pseudo-Princess Peach character with all the floatiness you’d expect. Nabit, on the other hand, is “easiest” and short of falling out of the sky, into lava or poisonous rivers cannot die. It almost removes any of the challenges from the game, but is an interesting option for younger players, I suppose.

There’s a whole slew of power-ups for our heroes to take advantage of in the levels with returning favourites as well as new ones, and mastery of these abilities will make your progression of the game that much easier. Unless you are Nabit, who cannot use any power-ups or ride Yoshi… 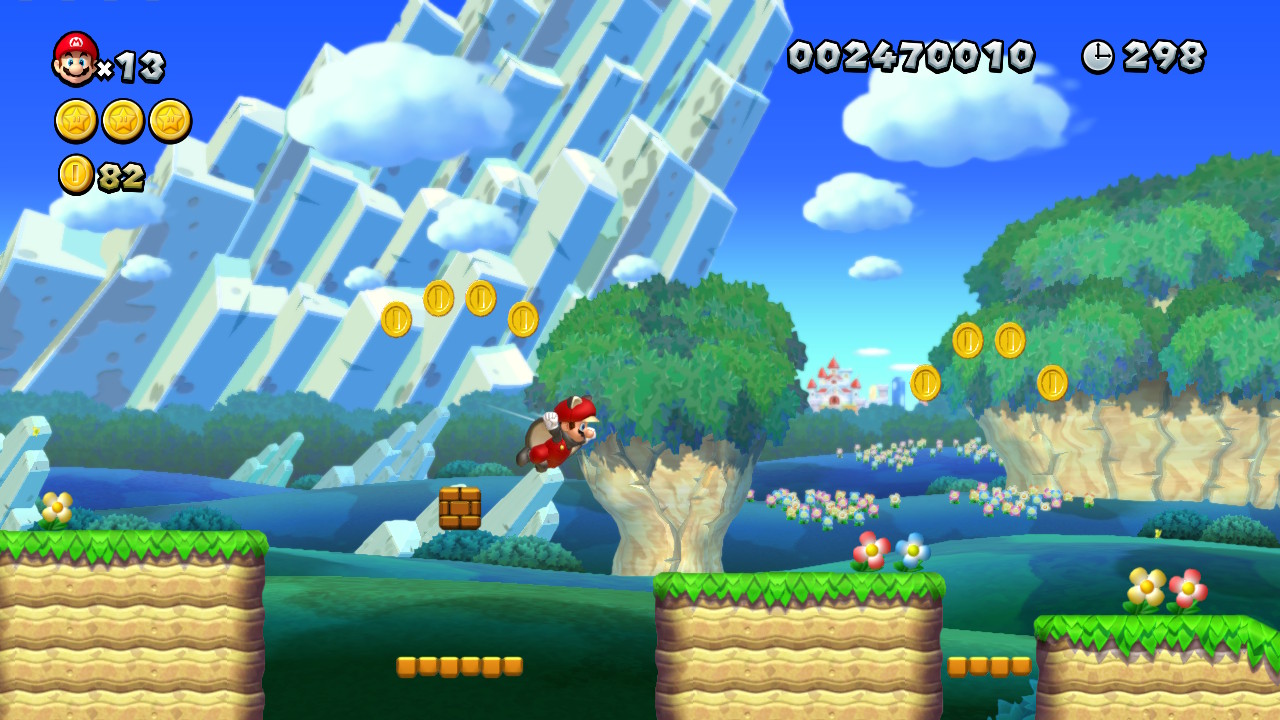 The new item for you to play with this time around is the Super Acorn, and once collected this will endow your regular character with the abilities of a flying Squirrel, with a tail and winged membranes. This allows for a limited amount of gliding, and also means that you can cling to walls. There’s also a “P” variant of the acorn, which like the “P-Wing” in previous adventures allows for flight throughout the level, although it’s a single use item; completing the level will then reduce it to the regular acorn. As I said, mastery of all of this will aid you in completing every level and unlocking every secret and obtaining ALL of the Star Coins; which will aid your progress of any secret worlds hidden within the game. It’s worth mentioning, though, that Nabit cannot use any power ups – after all, the character is impervious to damage. Instead, any power ups collected during a playthrough with Nabit will return extra lives instead when you reach the flagpole.

As well as the new characters, New Super Mario Bros. U Deluxe also packs in the New Super Luigi U DLC from the original game, which allows for an alternative take on the adventure as well as packing in even more of a challenge. 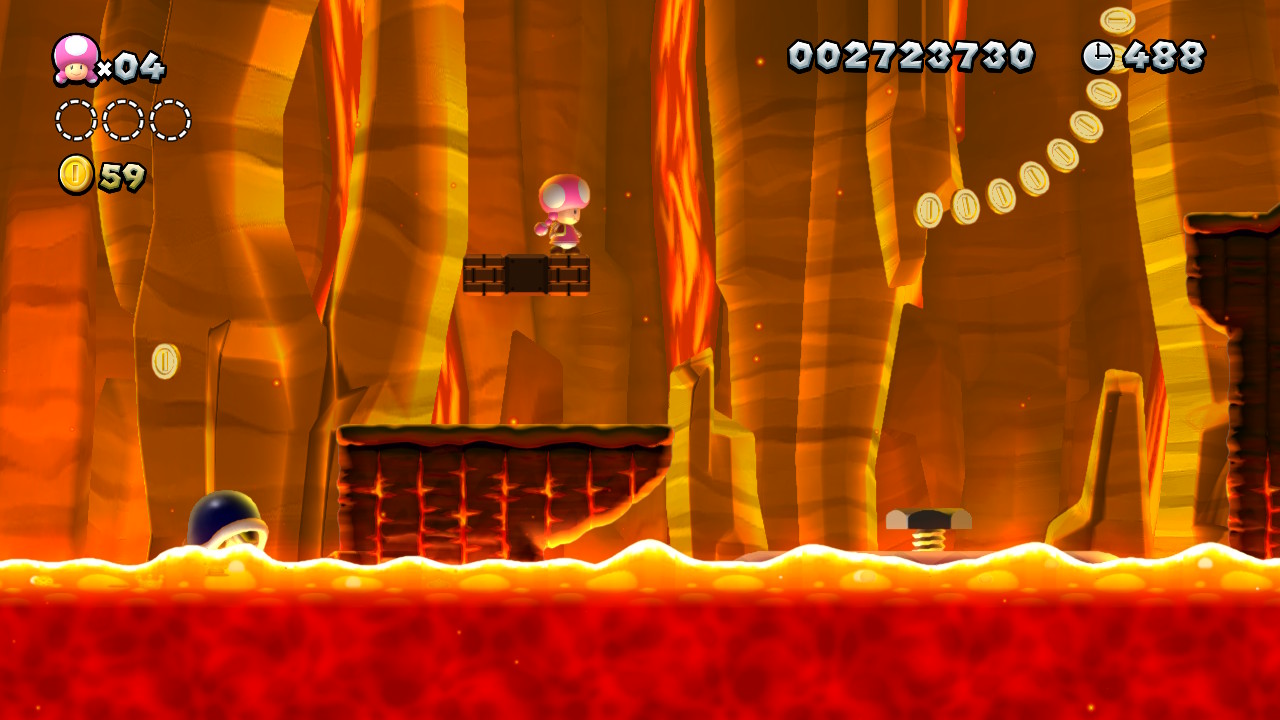 You can’t play as Mario (but Toad, Nabit and Toadette are playable here) and Luigi controls a little more trickily than usual. You’re also restricted to 100 seconds per level. This pressure really forces home the challenge and is really only recommended for experienced and skilled players. For those that enjoy playing with others, you’ll be pleased to hear that single Joy-Con play is supported, allowing for up to four players in each level to play together.

There’s a lot to see and do here, so if you’ve not played New Super Mario Bros. U before then this Switch release is definitely worth a look. It’s packed with content, challenge and fun and is easily the best side-scrolling Mario title since Super Mario World. It will keep you occupied for a significant amount of time and is a fun and worthwhile experience; definitely worth picking up if you love platformers and Mario adventures. If you want something more expansive then look to Super Mario Odyssey as it remains the quintessential Mario experience on the Switch.

It’s the best Super Mario 2D experience for more than 25 years and a welcome addition to the Switch’s library. If you’ve not experienced it before then you’ll be in for a treat. Those that purchased this on the Wii U, however, are probably best off avoiding it. For everyone else, it’s a treat.