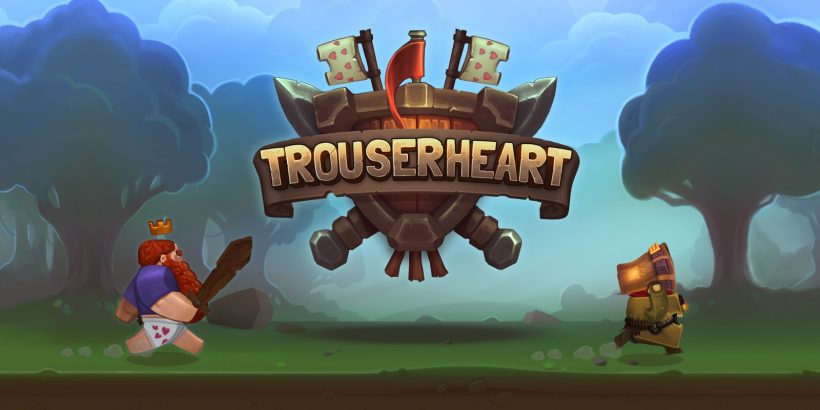 Captain Underpants, Bananaman, Superman, Batman. All superheroes, sure, but the other thing which links them is that they aren’t heroes who are afraid to show off their briefs. In a weird way, Trouserheart follows in those heroes’ footsteps.

Trouserheart is a basic feeling hack and slash type game where the hero’s quest is about reclaiming his stolen trousers. Ported over from mobile, Trouserheart is one of those games which feels it might have been better staying put in its original home.

The game adopts the Super Mario Bros formula of working your way through to the end of a level only to find that ‘your trousers are in another castle’. Each level consists of a small number of screens which can have differing objectives. Some can simply be about hacking your way through every enemy on the screen, while others involve flooring which collapses after you walk on it, prompting you to be wary of the path you take across the room in case you need to backtrack to pick up a collectible that might spawn later on.

The enemies may change and the number of whacks you need to deal out in order to defeat them may increase as you progress through the game, but the overall feel of each level is a little bit too similar. Difficulty comes when you inadvertently release bombs and enemies from within treasure chests, or when you have boulders falling from the sky to contend with as you try to pick off each and every enemy on the screen, but that feeling of repetition continues to seep through – whack every enemy in a room, move to the next one, rinse, repeat. The simplicity of the controls, which simply use the control stick to move and one button to swish your sword around, act to exacerbate this. For that reason, it’s for sure that Trouserheart isn’t a game that puts heavy emphasis on skill.

You can employ upgrades to improve your health, your damage dealing prowess and more, but Trouserheart is certainly not a complicated game to get into. In fact, to match the control scheme, it’s probably the simplest upgrade system on the Switch – collect gold on your playthroughs of levels, and then simply spend it on upping the meters when you get the chance.

But then Trouserheart is a fundamentally simple game. The story is simple, the visuals are neat and cartoonish and the gameplay is so simple anyone can pick the game up and get right to work. That is Trouserheart’s biggest strength – it won’t alienate players from the off, that’s for sure – but in terms of being a memorable experience, its simplicity is the reason that it falls short. It’s one to pick up in an eShop sale coming soon.

Trouserheart is simple and fun, but lacks the depth to be memorable to any major note. Fortunately the price point isn’t too high, but expect to see it in an eShop sale in the future.