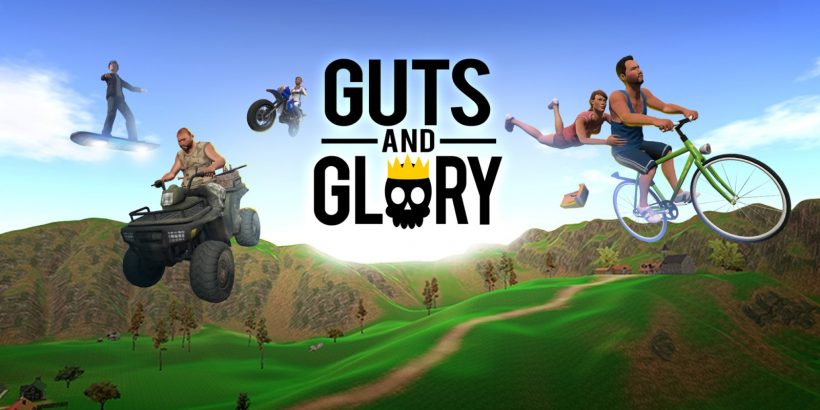 If you’re faint of heart, you need not apply when it comes to Guts and Glory. tinyBuild Games’ gore-filled stunt driving game is a long way from the drive in the park that the first few seconds of the first level would have you believe.

No, this game is an absolute death trap. It’s your job to make it across different types of terrain and the air by safely passing through checkpoints en route to the finish. But it’s not a simple case of driving from A to B; you’ll be trying to do this while dealing with circular saws, cannonballs, spikes and other ridiculously impassable obstructions. Gameplay is all about reaching the end goal in as short a time as possible, but the entertainment comes in the violence that takes place along the way.

Part of the comedy comes from the game’s characters, and how intentionally difficult it is to control them. From Zoe the stunt bike rider, Junior and his hovering skateboard, pensioners Jack and Jill in their bike and trailer cart combination (Jill will immediately fall out at any inkling of a pacey turn from Jack) to hillbilly Earl and his quad bike. Doing so much as brushing against any of the game’s hazards will either result in an instant violent death or losing at least a limb, which will result in the gruesome image of blood spurting all over the place and will throw your steering all over the place.

That’s not to say steering is ever on your side in the first place. Just to be awkward, accelerating without even touching the control stick won’t have you go off in a straight line, which is awkward for a physics-based game so reliant on precision. It’s pretty horrific when it comes to the airborne levels upon a jetpack-powered wheelchair – issues with manoeuvring the camera and just simply having a general lack of control over any aspect of these levels was pretty exasperating.

But the unnecessary over-difficulty of the controls is just one of the issues surrounding this version of the game. The frame rate is pretty poor, and the loading times are far too excessive for a game which is so heavily reliant on restarts due to failure. Also to this version’s detriment is the missing map editor mode found on other systems – you can only play the existing tracks, which of course reduces the amount of playtime that you can get out of the game.

So all things considered, scoring Guts and Glory is a tough task. It certainly feels like it’s doing something new in comparison with the swathes of eShop, but at the same time it feels a jagged experience which is rougher around the edges than the developers intended. More seamless controls would have earned a higher score.

Rough around the edges, Guts and Glory needs more work on improving its controls. It does provide for some sick, macabre fun though.