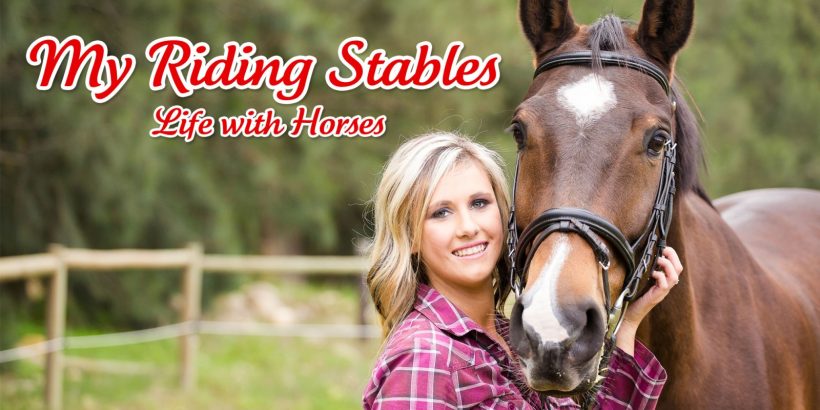 There are some games out there which you just know are going to be terrible before you even boot them up. I always try to maintain a neutral viewpoint when reviewing any game, that’s a given, but there are some cases where that is mighty difficult.

My Riding Stables: Life With Horses has you take charge of a small farm where you rear horses, cleaning them, feeding them and training them up for competitions. You pick a trainer at the start, give them a name (yep, rude words are on the table) and then pick a horse. The horses are supposed to vary in breed, but changing this only changes the size of the horse; otherwise they look identical. You can change the horse’s colour too, which is a rather unsatisfying effort at customisation.

Then, trainer and horse chosen, you’re thrown straight in at the small form with a list of tasks to carry out, from fetching your horse and taking it to the paddock to feeding it carrots and grooming its hooves. The grooming and cleaning bits are particularly painful, simply consisting of sliding the cursor left and right, up and down as the horse becomes slightly less blemished at a really, really, really slow speed.

Movement is juddery and the control stick seems to do some unpredictable things at times as you try to manoeuvre yourself around the place. You need to walk over to illuminated circles littered all around which allow you to upgrade things, enter buildings or retrieve your horse through a series of awkward menus.

The closest we come to finally having a game on your hands is when you finally unlock the ability to ride the horse and get to march around hopping over hurdles. But it’s so tediously boring, and the controls are so inaccurate even the most docile of players will be incensed in no time. There’s a major delay in your inputs taking effect when jumping. There’s really no enjoyment to this, and that goes for every type of player.

It really does make you wonder how games like this managed to make their way beyond the eShop and actually appear on store shelves. Publishers Treva were also behind the terrible Panda Hero, and are in danger of developing a reputation if they go on to put out many further sub-par physical releases on the Switch. Hilariously, the cover art is of an actual, real human woman with an actual, real horse, which is so far from the cartoonish graphics of the game it’s quite astonishingly misleading.

You can ride horses in Zelda: Breath of the Wild and it’s a totally optional part of the experience. But yet that’s a trillion times better than any of the entertainment you’re getting in My Riding Stables: Life With Horses.

My Riding Stables - Life With Horses

The guys who approved My Riding Stables – Life With Horses need to take a look at themselves. It’s lame, no fun and brings nothing to the Nintendo Switch game library.