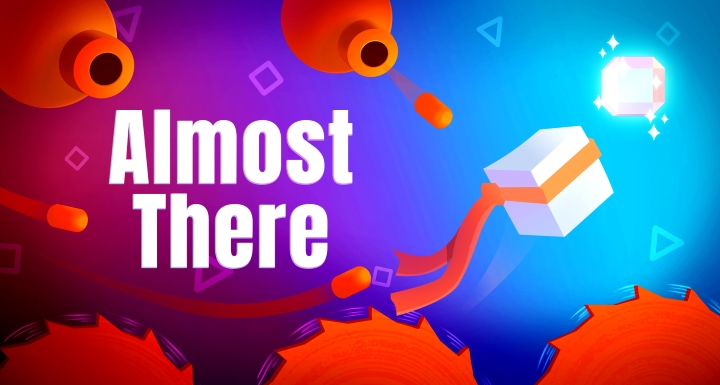 The first third-party published title from QuantumAstroGuild (developers of The Bridge and Tumblestone), Almost There: The Platformer is the first console game to come out of Bangladesh, which is very cool indeed. It does exactly what it says on the proverbial tin, and it does it well: challenging platforming, and plenty of it.

Similar in feel and level setup to the beloved and hailed indie Super Meat Boy, Almost There features 150 levels with three different worlds, music tracks and themes, those themes being blue, red, and a darker shade of blue. Controlling a little white square with a slick bandanna, players must employ all of their dexterous nous in order to progress.

Worlds will introduce a couple of specific obstacles, including spikes and lasers, and then slowly dial up the difficulty, subsequently teaching you about each obstacle, until you really have to master your jumps to get to the finish by the game’s end.

The platforming itself is intuitive, teaching you different manoeuvres early on, and they’re all easy to perform using the game’s smart controls. Jumps can be pulled off with both the A button and the shoulder buttons, and the wall jumps can be pulled off by simply rocking the analogue stick back and forth. By simplifying these controls into an intuitive motion, the game allows you to pull off fluent, twitch-based movements, and really puts you in control of your little square.

Levels in Almost There have a three-star ranking system and an attempts counter; traits that we have come to expect from games of this sort nowadays, but which do appeal to the handheld nature of the Switch, with the stages easy to jump in and out of if you’re on the go. HD rumble in the Joy-Con is also always a welcome addition.

Almost There is nothing we haven’t seen before in an indie, and in fact it doesn’t do it any better than a lot of indies on the market, but it is pure meat and potatoes platforming with plenty of levels to get stuck into, and it does it well. You have to respect it for doing exactly what it says on the tin – it’s a platformer that the hardcore fan will enjoy, after all – and as the first console game to ever come out of Bangladesh, we’re off to a good start with this one.

This is why indie development is so great: it’s one guy making a fun game.

Almost There: The Platformer

Almost There: The Platformer is bare-bones platforming, with simplistic visuals and sound, but the platforming shines. If you fancy a challenge and have a few quid spare, it’s worth a spin. Be there and be square.