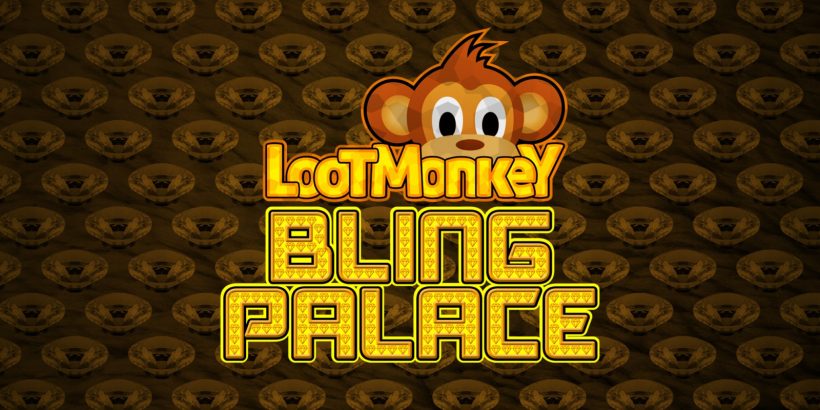 In Loot Monkey: Bling Palace, you explore the various rooms of the palace as the servant monkey Dougie, surviving for as long as possible whilst collecting the Evil Overlord’s loot. Such loot comes in many forms, including gems, bank notes, jewellery and – bizarrely – chocolate bars. While the core gameplay remains identical across all available modes, each adjusts the number of lives you play with, creating more or less of a challenge as desired. The default setting for new runs is eight lives, making it a good starting point for first-time players.

The distinct lack of tutorial makes the game challenging to leap into, and the Practice Mode – in which you can freely explore the Bling Palace – is only useful if you know the exact names of the rooms you wish to practice in, as there is no list to choose from. Hazardous items, angled jumps and slopes, moving platforms and accelerating / decelerating floor panels serve as tests of your platforming prowess during your loot-collecting mission. Enemies, emblazoned in a red shimmer, also prowl these rooms, meaning you must avoid jumping into or on top of these, for fear of instant death. After all, once all of your lives are spent, it’s game over.

Sadly, the game’s challenges are more down to poor design, rather than skill being required. The sensitivity when jumping over obstacles felt particularly unfair; for example, when walking downhill, tapping the B button to jump didn’t always register, meaning that I either fell from a ledge or walked straight into an enemy. Inconsistencies such as these feel like broken game mechanics, rather than challenges to be overcome through natural progression and play time.

The music of Loot Monkey: Bling Palace is an endless cycle of ’80s-sounding chip tunes with no variation, quickly getting repetitive. Thankfully, you can disable it if you wish, along with the sparse announcements by the commentator. You’ll occasionally hear the Evil Overlord telling you to hurry up collecting their loot, but you’ll never come to understand who it is you’re working for, or what their intentions are.

Although the game seems suited to the Switch’s casual handheld playstyle, and should be commended for having no noticeable graphical differences between handheld and docked, there really isn’t enough content to justify the game’s £5 price tag. There’s no achievement system, no sense of progression, and no obvious goal except for endlessly collecting loot.

If only Loot Monkey: Bling Palace inspired you to want to collect more loot, and discover all of the rooms; as it is, restarting the entire game upon death feels like a chore, and one that you can’t reasonably overcome. I struggle to believe that anyone could play this title for an extended period and feel anything but frustration and disappointment.

Loot Monkey: Bling Palace pales in comparison to the many other indie platformers out there that do what it does better. With an unreasonably steep price tag for its content, and mundane gameplay, the only real joy I got was from playing as the cute monkey protagonist.