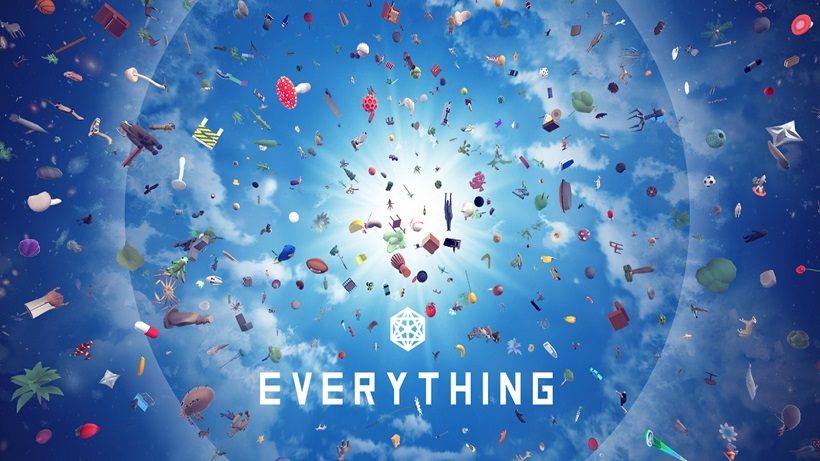 The world is a pretty big place. In our lifetime, we’ll only ever explore a tiny part of it, and only ever through our own perspective. But what if you could explore beyond that and do it from the scale of, say, a tiny snail, or a majestic Douglas fir tree?

A journey of self-discovery and transcendental exploration, Everything explores this very concept, and is very much about the experience of the individual. Depending on your interest in philosophy, this may sound great or terrible; mostly, all you have to do is move things (frogs, trees, phone boxes, continents and more) while discovering more objects.

It’s not just about taking control of and moving different things, though, as you can also talk and dance with them. A guide is present for most of the core game, but you can play however you wish. At times, it’s not always clear what you should be doing; in those moments, it’s probably best to do what the game explicitly tells you, as this ultimately teaches you how to embrace the true freedom to explore and make the game world your own.

The main aspect of the exploration is ascending or descending to bigger or smaller creatures and objects, which must be done in stages. For example, you can ascend from a tortoise to a coconut tree, then perhaps to a bear, but you cannot always skip the in-between size. Thus, strategic thinking is required, as opposed to always aimlessly ascending or descending. Going in either direction has the power to change your plane of understanding, be that from what we as humans perceive, to the microscopic or the galactic and beyond. Thankfully, the controls aren’t as abstract as the rest of the game sounds.

Much of the written dialogue that presents itself is existential in nature, and this is further emphasised via the inclusion of a collection of audio lecturers from philosopher Alan Watts.

These audio clips are entirely optional, and don’t directly impact the game, but they greatly contribute to the experience. Watts’ captivating voice carries you through the journey of exploration as he ponders how we as humans perceive our own existence and the universe that encompasses us.

On the whole, the gameplay isn’t that unique, except for when you are controlling animals in the standard plane of perception, as these lack a normal walking / running animation and instead move around as if they were a plastic toy played with by a toddler. The result is absurd and wonderful as it sounds and does just enough to add enough to differentiate the core gameplay from say a walking simulator.

Ultimately, the experience of Everything on Switch is the perfect way to contemplate your very existence. The philosophical overtones might do more of the heavy lifting, but there is fun to be had through your exploration of the universe by becoming a range of increasingly absurd things.

Everything rejects everything that you’d usually consider a video game. Yet this interactive experience is coherent in its mission of providing existential exploration and gets pretty close to its promise of allowing you to control everything; even a hat.