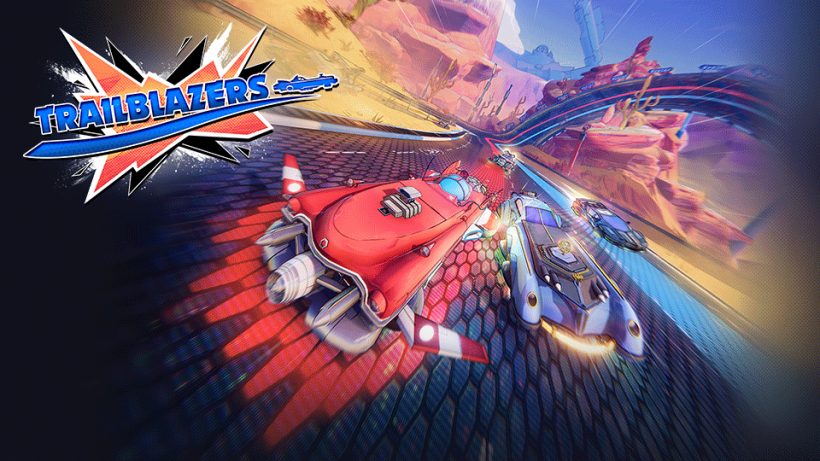 Trailblazers is a racing game that mixes elements and ideas from much-loved games of the past. Its futuristic setting and hovercraft-like spaceships hark back to titles such as F-Zero and Fast RMX. When it comes to identity, it follows a cel-shading art-style accompanied by comic strip narrative sections, giving nods to Jet Set Radio) Then, from a gameplay standpoint, it seems to borrow some ideas from Splatoon, because the core mechanic of Trailblazers is that you can paint the track at the same time as you race.

On paper, the result of this unusual mixture sounds like an inventive take on the racing genre. The reality, though, is a bit different.

The painting mechanics of Trailblazers are implemented in an interesting way. You have a tank to store your paint, which is automatically re-fueled with time. When it’s charged, you can choose to use the paint in one of two different ways; first, by holding A, you spread the paint behind you. With the X button, you shoot a trail of paint to the front. This second option can be used as an offensive projectile against your opponents, and hitting them causes them to spin and lose speed. This adds a level of depth to the races.

That depth continues even further. Driving through your trailcolour activates your boosters, increasing your speed considerably. Each race also makes use of a co-op element, placing each racer as a member of a team. Multiple members of a team can paint the track with the team’ colour, so the one bringing up the rear is helped to maintain pace with the leading pack. As interesting as that mechanic is, Trailblazers has problems when it comes to its very basics racing controls. Your vehicle seems to have absolutely no weight, and the controls, are too loose as a consequence, meaning it feels a constant battle against the game to keep your vehicle on-track. With such an interesting idea forming its foundation, it’s a shame that Trailblazers falls short on its handling.

It must be said, though: Trailblazers isn’t short of content. There’s a lengthy campaign, which does a good job on creating a series of unique challenges. Racers are set objectives alongside simply trying to finish in first place, so again, the racing action feels multi-faceted. The campaign should set you back about eight hours’ playtime, and you also have a series of tournaments to tackle at your leisure once you’re done.

Online and couch co-op mean you can perform this tag-team racing with your friends and not just the CPU. But unfortunately, at the time of the review  (at which point Trailblazers had already been on store shelves for over a month), it was a hard ask to find players online, despite cross-platform abilities. But on your own, if you don’t mind a drop in resolution and some frame rate dips here and there, you can enjoy Trailblazers.

The concept of Trailblazers makes it a racing game like no other, and its coloured trail mechanic certainly offers a unique experience. But loose controls and dead multiplayer mean this isn’t a great package.