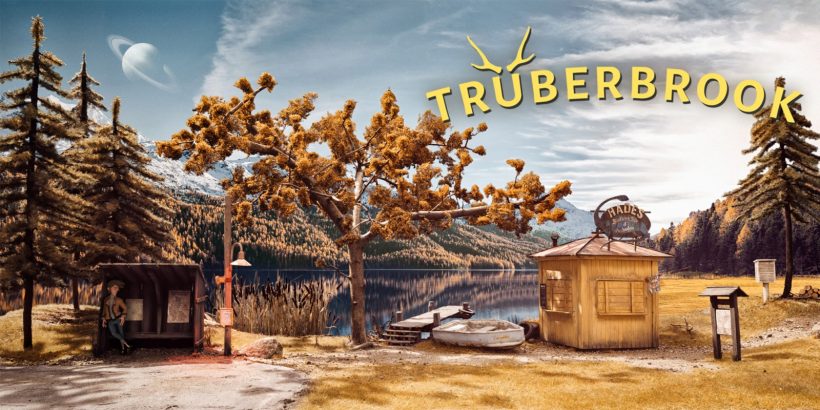 Narrative-driven point-and-click games are fairly easy to come by on the Switch. The newest addition, Trüberbrook, takes you back to 1967 Germany, and offers an engaging science-fiction interpretation of the era.

You play as Hans Tannhauser, a quantum physicist who has won a trip to the eponymous town of Trüberbrook under somewhat mysterious circumstances. You’ll meet a cast of entertaining characters during your vacation in this idyllic town, but be warned: not everything is as it seems.

As is typical for point-and-clicks, gameplay involves interacting with other characters and the environment in order to move the story forward. There’s a decent focus on puzzles, the successful completion of which will allow you to progress through the game. If this sounds familiar, it’s because Trüberbrook doesn’t really bring anything new to the table in this regard. However, this translates to familiar mechanics and a generally straightforward gameplay experience.

Unfortunately, though, Trüberbrook does fall victim to the same traps as a number of other point-and-clicks that wish to offer meaningful, stimulating gameplay without fundamentally reinvigorating the genre. Indeed, in its attempts to provide players with a challenge, the game simply resorts to puzzles based on unconventional combinations of objects and actions.

The result, of course, is that puzzle solutions are often not particularly predictable or easy to work out. If you find yourself stuck, you’ll often find yourself running through every single interaction option in a given context, often more than once, in search of a solution. This does have the effect of making gameplay feel a little sluggish at times, although the game makes up for it in other ways.

For instance, Trüberbrook certainly excels when it comes to its atmosphere. The game marries highly detailed backdrops with a unique animation style in order to create a world that’s bursting with character – perfect for the Nintendo Switch. The game’s audio is likewise fantastic, with a gorgeous soundtrack and outstanding voice acting bringing the world to life. The story is similarly engaging, even if a number of the plot points were left somewhat undeveloped. Everything is tied off by the game’s dry humour and well-timed non-sequiturs, which simply add to the charm.

Nevertheless, the game is admittedly held back by a host of technical problems. These range from mildly clunky controls to having an entire event sequence repeated (despite it not making narrative sense to do so) if you accidentally pick up a certain item twice. While these issues don’t render the game functionally unplayable, they do take some of the polish off what would otherwise have been a fairly robust entry into the genre.

At the end of the day, Trüberbrook doesn’t functionally reinvent the point-and-click narrative adventure. However, if you can look past its occasional lack of polish, the game’s excellent atmosphere and eccentric story make for a fairly decent experience.

While Trüberbrook suffers from a handful of technical issues and some occasionally sluggish gameplay, the story, atmosphere, and dry humour make for a largely enjoyable experience. However, if you don’t already love point-and-clicks, this one won’t change your mind.