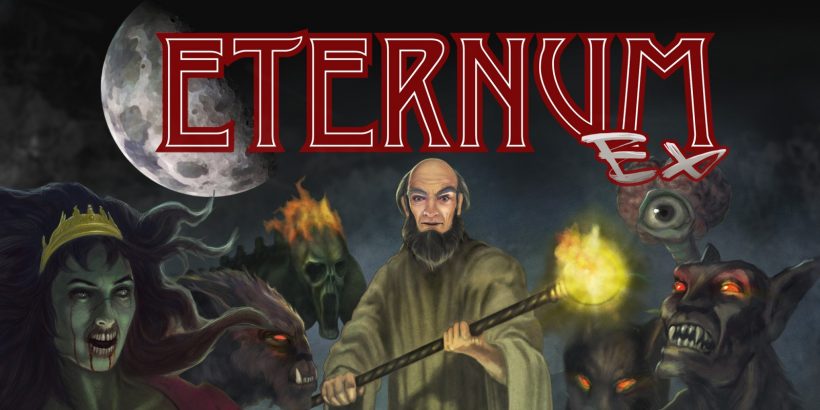 If you’re enjoying some of the offerings on the NES Online app on the Switch, Zerouno Games may have a title which is your cup of tea.

The arcade-inspired Eternum EX has you running around a level collecting treasure chests while dodging enemies, before heading back to the start point to move on. Each collected chest yields a certain number of points, which can be increased if you get to the platform underneath them and jump into them from below – think of it like the way you stunned enemies in Mario Bros.

The green chests are locked with chains, so you must jump into them twice from underneath in order to collect them. Mario Bros is pretty similar to Eternum EX mechanically, in fact – both are presented as a two-dimensional structure of platforms which task you with collecting things (optional in Mario Bros, of course) while killing enemies (which is optional in Eternum EX).

This is by no means a technically difficult game, but where the challenge comes is in in the speed of the enemies, with your A button attack only having a very short range of impact. As such, if an enemy is bearing down on you, you only have a very finite time window in order to knock them down.

Power-ups can lessen the impact of this, though. Some allow you to unleash fireballs with a button press, others simply launch a bunch of fireballs which rebound off the walls and take out any enemy in their path. There are also one-ups, which will prolong your playthrough and which aren’t too difficult to pick up as they can often generate near to where you’re standing.

Mixing things up with boss battles, where you must ascend to find a boss on the top platform, makes Eternum EX seem like it has a bit of variety. But it is the sort of game which could have done with allowing you to get a second player involved for co-op or head-to-head point-scoring action.

As it is, the chief thing to consider with a game like Eternum EX is that, while there may be very little technically wrong with it, like most of the games of the era it replicates, unless you’re a huge fan of the genre your attention won’t be held for the long term. With many other deep and rich experiences available today, you’ll likely soon be moving on to something else.

Eternum EX is a solid arcade experience, but is unlikely to hold the attention for long. £12.99 seems steep for a game like this in this day and age.