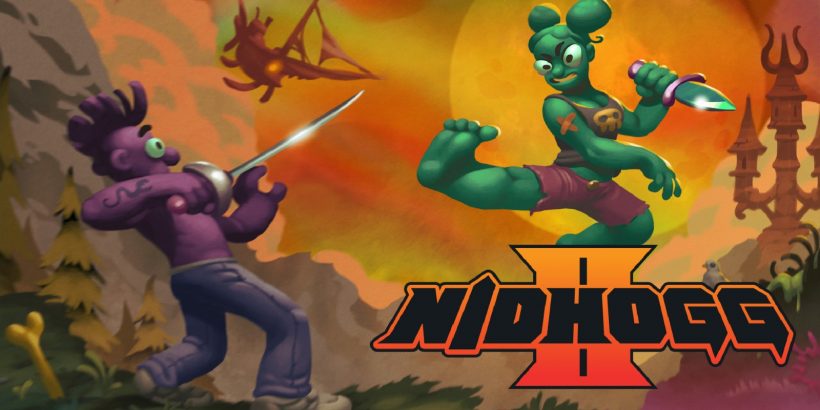 Nidhogg 2 is the first game I can recall giving me a dead arm. Don’t worry, it wasn’t due to repeatedly smashing the Switch’s X or Y button. Nor was it because of the frantic race that ensues when dashing to the opponent’s final screen. No, Nidhogg 2 gave me a dead arm because it’s the kind of fighting game that will have your girlfriend repeatedly punch you for winning after 30 minutes of intense back-and-forth warfare.

Though still not on the Switch, anyone who’s played the original Nidhogg will be instantly familiar with this souped-up sequel. The basic concept sees two players dropped into a colourful stage, facing each other in a duel that will see the winner eaten by the eponymous Nidhogg. You win by being the first to reach the last screen on your opponent’s side, using an eclectic mix of weapons to one-shot kill your AI or player-controlled enemy. If this sounds exceedingly simple, that’s because it is. And thankfully, all the stripped-back elements that made the first Nidhogg so celebrated remain intact.

This iteration of Nidhogg’s most notable change comes from its art style. Whereas the original merely saw you play as the faint outline of a pixelated man, here players can personalise their own wacky character to make them fitting for the game’s madcap foolishness.

There’s also a better attempt at a campaign of sorts now, where players can work through each of Nidhogg 2’s ten unique stages to get a sense of the quirks of each. All feature a mix of environments, platforms, and obstacles you’ll need to navigate while chasing down your opponent, as you fight through everything from castle innards to a nightclub.

It’s in playing against other real-life players where Nidhogg 2’s nature as the perfect party game comes to life. There’s an online offering, sure, but Nidhogg 2 works best as a hark back to the 1 v 1 couch-based fighters of old, where taunting your opponent can be just as effective as throwing a fencing sword to win.

Speaking of weapons, Nidhogg 2 introduces three new ones in addition to the classic poker: a bow, dagger and broadsword. The broadsword trumps the fencing sword as you’d imagine due to heft; the bow is good for range but is slow to fire, and the dagger can be deadly up close. Luckily, none of these new setups complicate the core Nidhogg experience.

While there was legitimate concern that going ‘bigger is better’ would harm what made the first Nidhogg so joyful, almost every stride it takes in terms of art style, weapon types, and level variety are welcome ones.

Nidhogg 2 is one of the simplest yet satisfying competitive bouts you can have with another player and won’t fail to make you smile even as you pierce your enemy’s guts through for the millionth time.

Nidhogg 2 is a madcap, tug-of-war fighter that shines in its simplicity. It improves on the original in almost every way, adding in new weapons, stages, and customisation options that bring what made the first special further into the forefront.