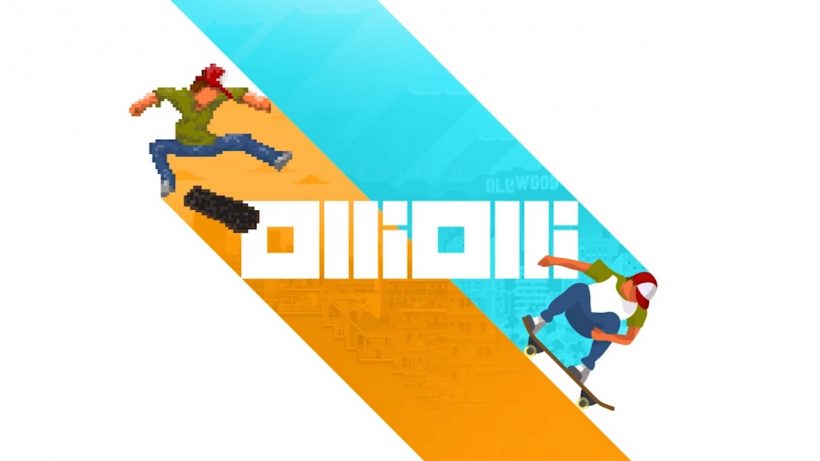 Think skateboarding games and most people who remember will tell you their fond memories of playing Tony Hawk’s Pro Skater back in the day, or more likely they’ll tell you that the second game was the absolute pinnacle. While it sadly looks less and less likely we’ll ever get those good times back or a proper skating sim, in recent years developer Roll7 have created the best indie skating alternative with OlliOlli and its sequel OlliOlli 2: Welcome to Olliwood. This excellent package bundles the two games together for Switch, with the sequel arriving on a Nintendo platform for the first time.

In general, both games follow the same structure. This isn’t a 3D skate park where you can freestyle all you like, but rather your skater has to navigate a series of tricky obstacle courses on a 2D plane. They’re all levels with a beginning and end, but it’s up to you how well you do to get there.

The controls are relatively simple but there’s an enormous depth in mastering timing and precision if you want to do well as the slightest crash or halting or momentum will mean starting all over. Your skater already starts in locomtion but tapping B lets them push to gain speed. After that you’ve relying on the left analog stick to perform tricks, first by moving or holding it in a certain direction or configuration before releasing. There’s a whole list of tricks you can pull off that the little pixels manage to beautifully capture, and if you’re familiar with Street Fighter’s quarter and half-circle motions, you’ll get the hang of it in no time.

As each trick launches your skater in the air, it’s also important to keep that momentum up by grinding on rails or otherwise getting a safe landing by hitting B at the right timing, lest you end up getting a sloppy landing that can undo all the points you racked up.

While it might not take long to get through each of OlliOlli’s five themed destinations, also split into five levels each, that’s beside the point. The real staying power of this game is that you’re going to want to keep replaying levels to get a better score and pull off the sickest tricks, so you want to build up huge combos by grinding from one rail to another and constantly build up your speed by getting Perfect grinds or landings.

It doesn’t stop there as each level also contains additional challenges to aim for. There’s the obvious ones like getting a certain high score or max combo but it might also ask you to pull off a certain number of perfect landings or tricks, or see if you can collect certain items in the level that can only be reached by a perfectly timed jump. Beating all these challenges will unlock an additional Pro level, which goes without saying amps up the difficulty and demands – so actually that double the number of levels on offer. Beating the Pro stages let alone nailing its challenges will definitely take more time and practice.

And you can expect to run into failure a lot, as your pixel skater trips, flies, crashes and gets subjected to all kinds of hilariously fatal collisions from an ill-timed landing or jump, making it as much like masocore platformers like Super Meat Boy as it is a skating game. The good news is that restarting is also instantaneous, or you can always tap X to retry right away, which is great for perfectionists who want a do-over the moment they catch a sloppy landing or narrowly miss an item.

To a large extent, OlliOlli 2 carries on the formula albeit with a few more wackier themed environments, like a Wild West one that sees you racing against a steam train in the background or a creepy abandoned theme park where your skater is also liable to getting burned alive or electrocuted. But it also throws in more new tricks like manuals and spins that adds to the challenge if only because you want to add this to your repertoire with all the other moves you’ve already learned.

Both games also feature excellent soundtracks that, while wholly unlike the alternative rock you might normally associate with skating games, have a perfect relaxed electronic vibe that keep you focused and rather offset the anguish of falling and tripping, while also letting you ride its euphoria when you do make it to the end to the cheers of the crowd.

These may be far from skate sims, but for the price, you’re getting the two damn best skating games of the generation that will keep you coming back for more.

With simple controls but difficult to master, OlliOlli: Switch Stance is a terrific bundle giving you the best modern skating games around. Even if you manage to ace all of its challenges, competing against players on daily leaderboards will be sure to keep you hooked.