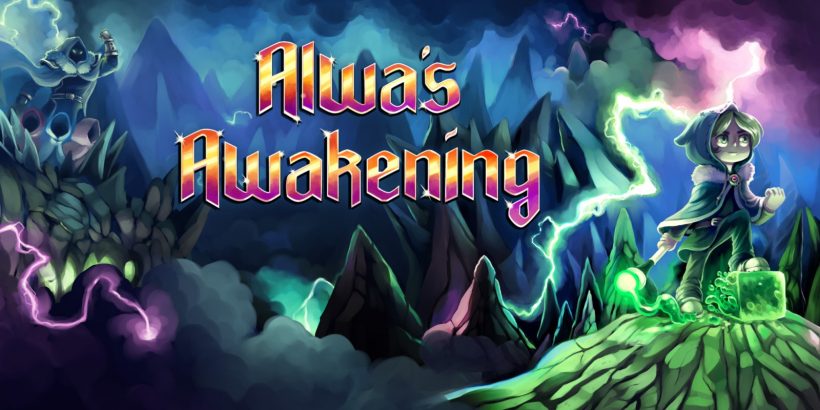 Alwa’s Awakening is a Metroidvania with NES-era presentation which is something akin to Zelda II: The Adventure of Link. In amongst all the side-on exploration sections, which have you leaping between platforms, slashing away at enemies and using power-ups to traverse wide gaps, there are also calmer sections set within a village, complete with NPCs. These aren’t in abundance though; this one is more about the gameplay and exploration than it is about story.

Starting the game with just a magic wand, orbs located across the map will bless the main character Zoe with new abilities, and create new elements in the increasingly puzzling experience. The first is the ability to conjure a green block, used either as a platform for getting to higher ground or to block enemy attacks. Others include the bubble, floating upwards and allowing you to bounce on it to scale steeper walls, and the fireball, handy for lighting torches at the other side of a room.

Much like in a 2D Metroid game, as you move from screen to screen your map automatically updates with a new square filled in. This map function does hark back to the NES era a little too much, with its limited amount of detail leading to frustrating guesswork as to where you need to go. Yes, exploration is of the essence here, but you’ll really need to inspect the map closely to figure out the rooms which are a dead end, indicated by a steady border on the map square.

The map does point you in the direction of nearby save points, which is a plus, but their locations aren’t always great, and getting one-hit-killed by a mine after successfully negotiating what seemed like an eternity of difficult drops can make the game more infuriating than it needs to be. That the game counts your number of deaths adds a further insult to injury, but it’s fortunate that any collected items like keys and orbs remain collected with your death – but if you died just short of collecting one, it’s often a difficult path back to the same position.

That’s the first of the game’s two drawbacks – the other is the gravity-defying jumping, accompanied by a ‘poof’ noise like the one we’re familiar with from Ice Climber. It’s not so much the going up that’s the issue, rather the coming down, which takes too long and leaves you at the mercy of enemies who often have inch-perfect shooting. This can be particularly crucial when timing is of the essence for landing on moving platforms, and an off-perfect jump could result in you taking damage or a one-hit death.

Despite these hiccups, there are strong aspects to the game, not least the pacing (save for the irritating save point positions). Each of the rooms are small enough to present one concise puzzle or platforming challenge, and you never feel like you’re dwelling on one puzzle for too long. As the game continues to borrow from the 8-bit classics of old, things like fake walls, which can be walked behind to discover hidden items, are a good and welcome nod.

With a campaign lasting somewhere between nine and eleven hours, and at only £6.99, Alwa’s Awakening is good value on the eShop. We’re keen to encourage Switch Player readers to try out new stuff from new developers, and this one is bright enough to back.

Alwa’s Awakening takes inspiration from Metroidvanias of the past, and while it doesn’t do much new, it does offer a satisfactory challenge.