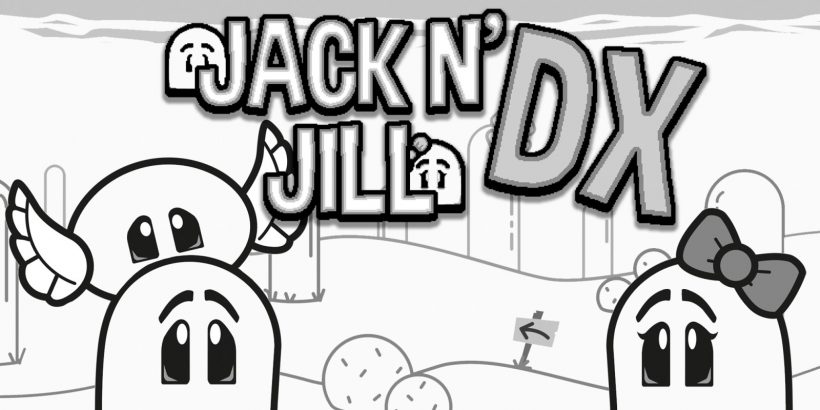 Remember that time Jack and Jill went up the hill in search of water but ended up tumbling down the hill together? Those clumsy oafs. They never got their water, but they did get a game loosely based on the bit where they fell down. Sort of.

Jack n’ Jill DX is, to all intents and purposes, a continuous runner-cum-on-rails platformer. The player is in charge of hitting the jump button at the opportune time, but little else on top of that. Ultimately, the aim is to ensure Jack or Jill’s (you can choose the character to play as in the menu) safe progression throughout the level before bumping into the other character at the end. It’s not as simple as that, of course: A range of enemies are placed at fixed points across the levels which you’ll need to either avoid, jump over or stomp on. But it’s not the enemies which prove the biggest difficulty – it’s the spikes which are showered plentifully all over the stage, and the big gaps which force you to time a jump just right in order to avoid seeing Jack or Jill plummet into the abyss.

As is the case with any game of this kind, new elements of gameplay will rear their head as you make your way through the levels. Power-ups can increase your speed for longer jumps and demolish enemies as you run right through them, and wall jumps can be used to climb to new heights if timed correctly. Then there’s environmental changes, including blocks which crumble away after you’ve run over them for the first time, meaning that after you cannon off a wall and head back in the opposite direction, you basically have a new terrain to negotiate.

While difficult, Jack n’ Jill DX doesn’t get in the player’s face about how tough it is – level restarts are pretty instant, and there’s no obnoxious counter at play, racking up the number of times you’ve died in order to peeve angry players even further. But it certainly is tough – and that can cause irritation when the game starts to feel like a choreography, with dangers and obstacles appearing in the blink of an eye, and meaning you’ll have to play through numerous times in order to memorise where everything is. It cheapens the sensation of a difficult platformer, in this writer’s opinion.

The game is presented entirely in black and white, and its simplistic design appears not too dissimilar to the style of the BoxBoy games. But this feels like more of a hark back to games on the original Game Boy, something helped to no end by its bleep-bloop sound effects. Jack and Jill look like some sort of a cross between a Diglett and the hills in the background of Super Mario World, but with no story arc tying the levels together, there’s not enough of a reason to get attached to them; this is a game more about its levels than its characters.

There’s a decent amount of content here. There are 140 different levels in the main game, and playing through that will unlock mini-games on the side, depending on how many coins you’ve collected. There’s also an achievement system titled ‘Challenges’, requiring you to finish levels as both Jack and Jill, stomp enemies and more.

Jack n’ Jill DX is a good, solid runner. Great for pick up and play, and handling well, you’d be better off having it in your Switch set.

Jack n’ Jill DX is a difficult but enjoyable runner. You’ll feel like you’re playing the original Game Boy all over again.