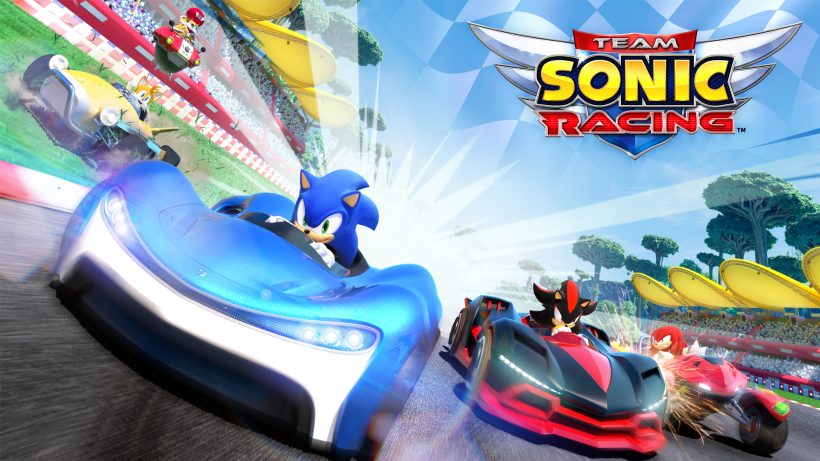 Booting up and playing Team Sonic Racing for the first time, it’s incredibly difficult not to draw comparisons to the Switch’s other kart racing game. No, not Nickelodeon Kart Racers… Mario Kart 8 Deluxe. Nintendo’s own kart racing masterpiece set the bar almost unrealistically high when it launched back in 2017, and while Team Sonic Racing is a pretty decent example of the genre in its own right, it doesn’t really even come close to dethroning the king of kart racers.

The last Sega-published kart racer – Sumo Digital’s Sega All-Stars Racing Transformed – encompassed several franchises from Sega’s history. Team Sonic Racing, by comparison, bizarrely strips back all of this to instead focus solely on characters from the blue hedgehog’s series. This is an odd decision in itself – while this game technically isn’t a sequel as such, you’d think Sumo Digital would want to expand the racer’s character roster, but instead Team Sonic Racing is likely to only appeal to those who are already fans of the Sonic franchise and familiar with its characters.

Rather than just settling for being a bog standard ‘every man for himself’ racing game, Team Sonic Racing’s big selling feature is the fact that you can race in teams of three. Whether this sounds appealing or not will likely depend entirely on your own play style – we found it to be a novel idea, but ultimately unnecessary. You and your teammates can help one another out in a number of different ways: you can gift weapons (known here as ‘wisps’) to one another, and in doing so treble the amount you carry in one go, or you can use your teammates slipstream to give your own kart a bit of a ‘catapult boost’.

Utilising these features frequently during a race will eventually build up your ‘Team Ultimate’ meter. What this effectively does is grant your character and teammates a massive boost of speed and temporary invulnerability. It only lasts a short amount of time, but if all three team members use it together, its effect can last significantly longer.

The gameplay in Team Sonic Racing is pretty decent for the most part. The game does only run at 30FPS as opposed to the 60FPS seen on other consoles, but don’t let this put you off. Yes, it’s not quite as smooth, but it’s certainly stable for the most part and makes for a satisfying gameplay experience. Boosting is also handled really well: you hold down the ZR button to drift around corners, and the longer you hold the drift, the most boost you’re granted. What’s particularly clever is that you can actually keep the drift going for as long as you like, if you’re good enough. Simply briefly release the ZR button and push the analogue stick in the opposite direction, and the drift will continue for as long as you let it. You can also gain a slight boost by performing tricks mid-air. Upon launching yourself from a ramp, simply flick the right analogue stick in any direction to perform a trick and hey presto, a miniature boost is granted.

There are three main modes in Team Sonic Racing: Team Adventure, Local Play and Online Multiplayer. Team Adventure is the game’s flimsy attempt at a story mode. The mode opens with pretty poor back and forth between the main characters of  the game before you’re sent to the mode’s overworld. Here, you’ll choose your event, which might be a standard team race, elimination race or something entirely different. Unfortunately however, there’s nothing particularly unique about this mode – it’s fine enough, but it would have been nice if the events in question had certain restrictions or alterations to mix things up.

Local Play allows you to take part in grand prix events, single exhibition races, time trials and wireless play. It’s all pretty standard stuff for anyone familiar with racing games, but it works as expected and will keep most people occupied for a while. Online Multiplayer similarly works surprisingly well, at least in our experience. There is, however, a slight input delay which might put off the more competitive of players out there.

Visually, the game is barely any different to the versions on other consoles, which is great to see. The tracks are bold and colourful, and the kart themselves are actually pretty cool. What’s more is you can actually access a garage menu which will allow you to modify your vehicles, from adding spoilers, new wheels and even change their colour or material. On the other hand, the game’s voiceover work and soundtrack is a bit hit and miss. The music is good enough for the most part, as standard for a Sonic game, but the characters seem to feel the need to pipe up at every opportunity during a race… These guys just don’t know when to shut up.

Team Sonic Racing is a decent kart racing game that you’d do well to try out. It handles really well and, despite running at a mere 30FPS, looks pretty good for the most part. However, the team mechanic is entirely unnecessary to the experience, and the game just simply doesn’t match up to Nintendo’s own karting effort.