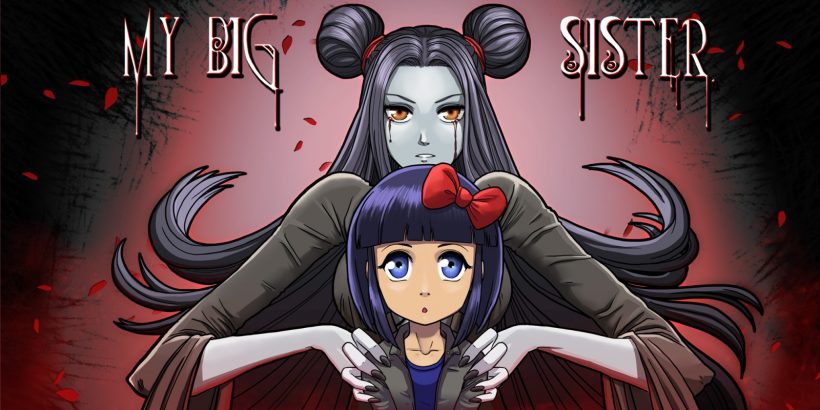 Having previously released on PC in November 2018, Stranga’s My Big Sister now finds itself on the Nintendo Switch courtesy of Ratalaika Games. A strange game, My Big Sister meshes together elements of adventure, horror and role-play, making for a unique experience.

You play as Luzia, a little girl who finds her older sister Sombie missing after going downstairs for a glass of milk during a peaceful night at home. Luzia finds Sombie tied up outside in the back of a van, but before she can react or escape, she is pushed into the back, the doors slammed shut behind her. It is soon revealed that Sombie has been kidnapped by a witch whose body has become disfigured, seeing Sombie’s as the perfect replacement.

After Sombie is transformed into a horrific demon with the desire to kill, Luzia must find a way to escape the confines of the bath house they are locked in and get help for her demonised big sister. Surprisingly, this is quite a story-driven game, despite its simplicity. It can sometimes feel like a visual novel, rather than a horror game, but thankfully the story is so well-constructed that it keeps players engaged for its 3-4 hours of gameplay.

The gameplay involves talking to people and investigating objects, which then reward you with items. Each of the items obtained will can be used to interact with people and other objects, aiding you in solving puzzles and escaping. This style of gameplay is enjoyable, but is often confusing, as some of the clues you find can be incredibly cryptic. There was a distinct lack of consistency in this aspect, however, as other solutions were far too easy to come by.

One of My Big Sister‘s weaker spots was its visual presentation. Opting for an 8-bit art style and a 4:3 aspect ratio, I found it sometimes difficult to see what was going on. Particularly in terms of lighting, the visual presentation of the game was frustrating, sometimes meaning that it was hard to find doorways and objects because it was so difficult to see, even in handheld mode.

In contrast, My Big Sister excels in its animations. The movements of Sombie as a demon were at many points horrific and unnerving, sending chills down the player’s spine. Similarly, the soundtrack of the game is exceptionally fitting, offering eerie and disorienting chip tunes that really haunt you as you progress. Perhaps one of the most rewarding sound effects is when you find a new item, as a jingle very similar to that of opening a treasure chest in a Legend of Zelda game plays.

Overall, in its moulding of several different genres into one game, My Big Sister creates a well-balanced experience. In addition to its elements of horror, the game also added some humour between the two central characters, allowing for several enjoyable light-hearted moments in an otherwise dark narrative.

While certainly a serviceable and incredibly well written horror game, My Big Sister sadly lacked in its gameplay variety – though at its low price point, it’s definitely worth a look if you’re looking for something innovative to scare you. A short experience, but one that will satisfy you if you’re willing to give it the time.

My Big Sister is an enjoyable and affordable horror game with a well-written story, but can’t quite decide if it’s going to be a horror game or visual novel. It is a short experience, but one that will satisfy you if you’re willing to give it the time.