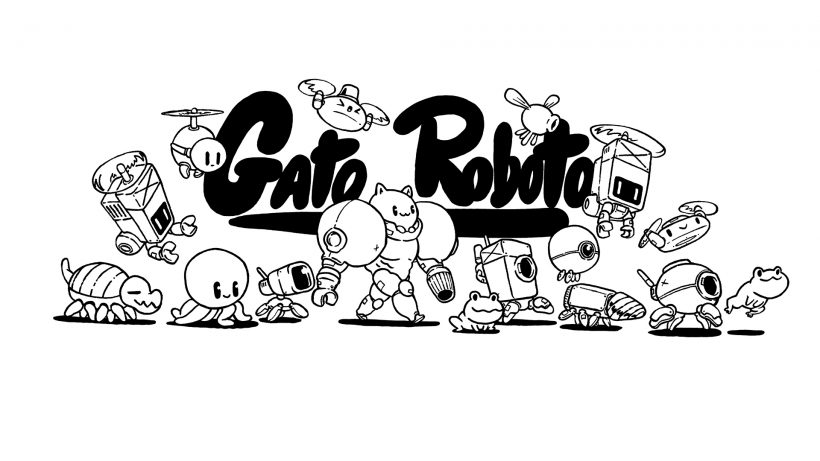 I’d like to start this review with a shocking confession: I’m not a massive fan of metroidvanias. Though I’ve fallen in love with the likes of Hollow Knight and Axiom Verge, the honeymoon feeling tends to wear off when the world reveals itself to be dauntingly massive, yet oppressively claustrophobic. One thing I am a massive fan of however, is cats. In comes Gato Roboto then, marketed as a “meowtroidvania” and featuring a feline protagonist in a mech suit. Sounds like a sure-fire way to coax me back into one of the most prevalent genres on Nintendo Switch.

In Gato Roboto you take control of Kiki, the pet cat of a pilot named Gary, whose spacecraft has crash landed on an alien planet. With Gary unable to free himself from the wreckage, he sends you off to venture beyond the crash site and figure out a way home. Kiki isn’t all alone though, thanks to a radio collar allowing for communication with Gary and, more importantly, a conveniently placed mech suit that thankfully doesn’t require opposable thumbs to operate. It’s a gleefully silly story, but one that’s told with enough heart and humour to remain genuinely entertaining throughout.

Gato Roboto features all the tropes and trappings one would expect from a metroidvania, albeit in simplified form. There isn’t an immense arsenal of weaponry on offer, for instance, but you will collect upgrades and augmentations to beef up your attacks and allow traversal to previously inaccessible areas. Sans-mech, Kiki is vulnerable to one-shot kills, but despite the increased jeopardy, bounding around and scampering up walls in cat-form is tremendous fun and provides some of the game’s most enjoyable moments. Back in the relative safety of the mech, weapons pack a satisfying kick and movement is swift, but the controls can feel a little loose at times. Some boss battles also left my fingers in a twist when attempting to jump, aim, shoot, jump again and dash all in one fluid motion, but the challenge level is generally quite forgiving. Plentiful save points also help to ensure that any frustration is minimal.

In fact, “minimal” is a fitting way to describe the utilitarian black and white graphics too. They’re perfectly functional and inoffensive, but the stylistic choice is arguably becoming a little overused in the indie space. Still, if black and white isn’t to your taste, you’ll find cartridges hidden around the world which unlock alternative colour palettes. Cleverly, these collectibles also serve a practical purpose as the currency for upgrading your blaster.

I found Gato Roboto’s music to be the most underwhelming aspect of the experience. The eerie, synth-driven soundtrack suits the environment, but even when aiming for sparseness there’s room for melody, and I can’t recall one tune that got stuck in my head. Tellingly, the music also seems to be quite low in the audio mix, perhaps suggesting that developers Doinksoft weren’t 100% happy with it either.

While certainly not perfect, Gato Roboto does more than enough to warrant your consideration, whether you’re a metroidvania junkie looking for a quick five hour fix, or a complete newcomer to the genre. For me, the highest compliment I can pay Gato Roboto is that it’s given me the desire and confidence to revisit the foreboding worlds of Hollow Knight et al, channelling the spirit of a brave little kitty the whole way.

Gato Roboto is a compact, charming take on a beloved genre, and a lesson to game developers worldwide: if in doubt, put a cat in it.