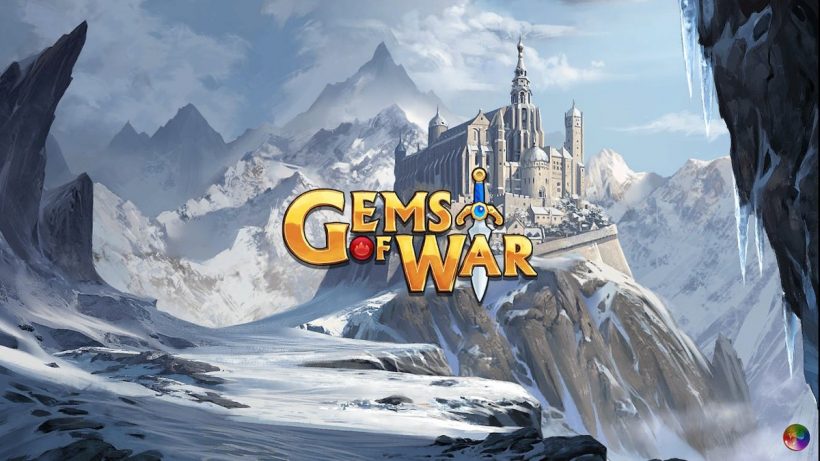 Gems of War is one of the latest free-to-play titles to grace the Nintendo Switch eShop, ported straight from mobile app stores. Best-described as a match-3 puzzle game that also includes RPG elements, the game tells the story of a warrior who finds his lands taken over by mysterious evil beings. His goal is to bring them down and restore order to his once peaceful world; along the way, he allies himself with other warriors in order to form a strong enough party to defeat his enemies.

The game plays similarly to many mobile puzzle games, such as Bejewelled. Played on an 8-by-8 grid filled with gems, your goal is to match three or more of a kind together. Each gem represents a different element; for instance, red ones represent fire, and blue ones represent water. Each of your warriors have an element assigned to them, and matching their coloured gems together grants them elemental points.

Each character requires a certain number of elemental points to be able to attack the enemy party; to be victorious, you must reduce the enemy party’s health to zero through repeated attacks. Gameplay is turn-based, with enemies being able to retaliate and attack your party after every move you make, and this makes the strategic matching of elements on the battlefield a necessity.

Gems of War has a robust story mode with the potential for 20+ hours of play to reach completion. Sadly, this expansive offering is hindered by one major flaw: a severe difficulty spike. The game feels like a standard match-3 puzzle game but with tacked-on RPG elements that hinder your enjoyment, as you become too focused on strategy whilst also trying to predict your opponents’ next moves. This is especially frustrating when you have set up a big combo only for your opponent to use it against you.

Another drawback is that, once you complete the first area, micro-transactions begin to rear their ugly head. As a free-to-play mobile port, it wasn’t entirely unexpected, but as the game has so many different in-game currencies – used to buy items such as new warriors, XP boosts and give advantages in levels – that the constant pop-ups seem almost predatory. It becomes clear that, while optional on paper, the game is incredibly difficult to play without monetary investment.

Such concerns are most prevalent in the game’s multiplayer features, which include a “clan” system that allows you to communicate with other players and swap hints and tips with them. PvP modes allow you to face off against other players’ teams of warriors, and it is questionable as to how fair and balanced this experience is given the availability of arguably “pay-to-win” micro-transactions.

In terms of gameplay methods, Gems of War supports both handheld and docked play. Handheld is arguably more enjoyable due to the availability of touchscreen controls for precision play, however, the widespread controller support for the Joy-Cons and pro controllers mean that there is freedom of choice. If only button controls did less to slow the pace of the gameplay, which undeniably hinders enjoyment.

Overall, Gems of War starts off as a fun and unique take on its genre, but as you continue playing, the shady micro-transactions soon dampen the experience, making it feel more like a cash-grab than an genuinely enjoyable game. Its lacklustre presentation also does very little to improve the experience, so don’t expect too much if you do decide to jump in.

Gems of War Free to Play

Gems of War starts off as a fun and simple match-3 puzzle game with RPG elements, but a ridiculous difficulty spike and predatory micro-transactions will put most players off quickly.