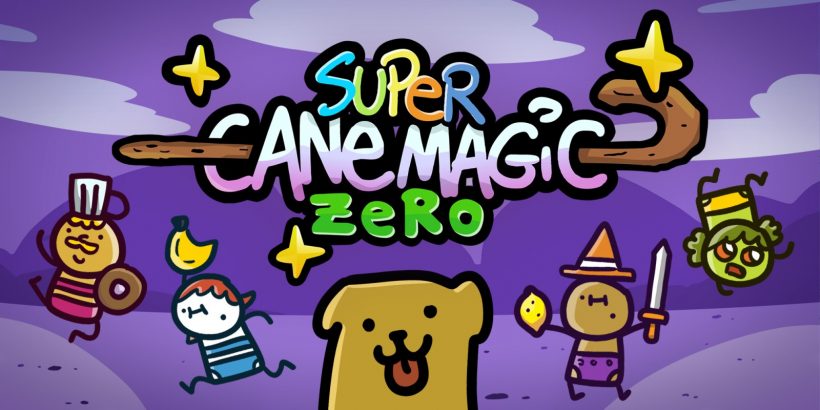 Super Cane Magic ZERO begins with a bang, the player waking in the middle of a massive crater. Promptly, you are arrested, let free, and come to the conclusion that you must be a comet. After all, why else would you wake in the centre of a crater unless you were some sort of meteor? Continuing on, you find out about magic canes – a.k.a. dogs – among other completely nonsensical plot points.

The game is an action RPG at its core, with fun couch co-op available to engage with if you so choose. There are also some multiplayer arenas to compete in, if that is more your style. You explore a cartoon world whilst engaging in combat in a similar fashion to that a twin-stick shooter. The left joystick moves your character, while the right joystick aims your attacks.

After landing a decent amount of attacks on an enemy, they will fall down in a state that allows you to pick them up. Picking up enemies and throwing them at walls or other enemies is a quick way of disposing of your foes, and is an enjoyable and unique mechanic. You have access to a bunch of abilities, too, of which you gain more as you level.

Levelling up functions exactly how you might expect. The more enemies you kill, the more experience you gain, and eventually you gain enough points to spend on a skill tree to improve your character’s abilities. There are different choices you can make on the skill tree that will differentiate your character from others, and you can tailor them to how you like to play. Sadly, although fun, the gameplay does unfortunately get repetitive rather quickly.

Super Cane Magic ZERO tries to coat its story and characters in a thick layer of low-brow humour. Unfortunately, the amount of forced humour nets diminishing returns as the game continues. The number of jokes told is almost unbearable, and is akin to that guy you know who won’t stop telling fart jokes. Sure, a couple might elicit a chuckle, but on the whole, they are just annoying and overcompensating.

On the other hand, the game’s artstyle is fun and charming, evoking feelings that a child’s drawings have come to life. In that respect, the visuals marry with the humour quite well, though after a while that mix does get quite tedious. The different environments are distinguished well from each other, keeping each new area interesting to explore.

As for the sound design, most of what you hear seems very suited to what you see on screen. From the frantic sounds of battle, to just plodding around the world, everything just sounds like it belongs in a game of this nature. Mixed with the visuals, the sound really brings the overall art design to life as a whole package.

While in some RPGs the menus while in handheld mode can be cumbersome due to the small writing, in this game, that isn’t really an issue. In terms of performance, there was never a noticeable moment of slowdown, nor were there any bugs throughout. That said, there are quite a lot of loading screens, some of which last what seems like an eternity. Overall, Super Cane Magic ZERO is at home on the Switch, and may be worth a look if you can withstand the cringeworthy humour.

The nonsense story and a humour that never seems to land hinders this rather simplistic Action RPG. Gameplay can be enjoyable, but everything around the games core becomes tedious rather quickly.