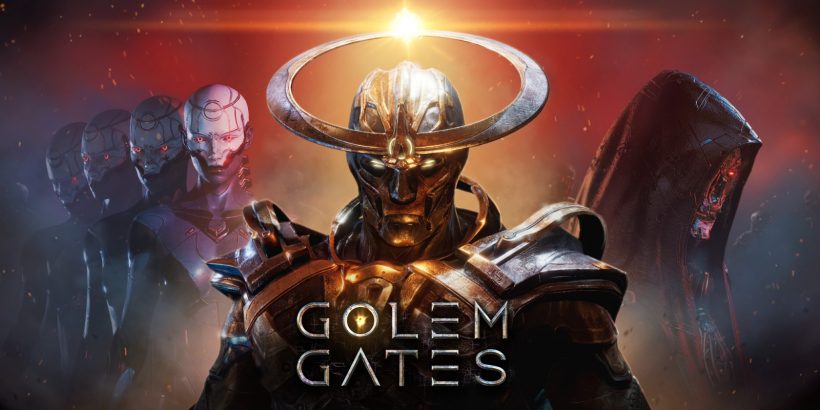 Golem Gates from Digerati is an eShop title promising ‘a post-apocalyptic sci-fi blend of action-strategy and card battling’. What it actually is, is a strategy game full of content for hardcore fans of the genre, more than for new starters.

In Golem Gates, you make use of various ‘glyphs’, which provide a wide manner of perks and advantages to assist your strategy, from adding more units to your party, to setting up turrets and safe points. You can’t just go around using these willy-nilly, however; each use takes up some of your energy points, so the tactical element of the gameplay comes in deciding whether to go for the lesser-powered glyphs as soon as they’re available, or instead holding out a while longer to get something with a bit more destructive power.

Like many strategy games of this ilk, Golem Gates has you balancing the act of launching an offence on the enemies’ base, while also being mindful of your own base and its status. Your ‘King’ piece in this game of Chess is the Harbinger, and like in Chess, if you lose him, it’s game over. While you do get notified when your base is under direct fire, it’s a bit touch and go as to whether you see the enemy making their approach.

As in Command and Conquer, you can either move all of your ranks across the battlefield at once, or split them into units or sub-types. That, of course, requires a decent amount of micro-management skill, and you have to worry about attacking, defending, switching between units, remembering where your Harbinger is and concerning yourself with where the enemies are on a battlefield, all at once on a battlefield you can barely see.

Fortunately, there are different gameplay scenarios to try your hand at, from a survival mode which has you attempting to withstand an absolute onslaught for a certain period of time, to one where you must laboriously trek across the stage in search of your glyph cards, thereby increasing the risk and danger of your exploration and leaving you highly vulnerable to attack. These switch-ups are a welcome alternative to the standard gameplay. Online modes allow you to battle others in a variety of different setups, and you can also try out your hand against AI opponents if desired.

Controls in Golem Gates are undeniably problematic. Trying to accurately pick and select between units when under the heavy pressure of an enemy attack didn’t feel very intuitive, with the cycling system for switching between units not as easy to use as it ought to have been. Slowdown, as you might expect, was also something that Golem Gates suffered from with hordes of units on the screen at once.

Knowing where to look, or which part of the battle to focus your eyes upon, will surely be a nightmare for anxiety sufferers, and the strategy seems to go completely out of the window in these instances. Overall, Golem Gates is content-heavy, but only really suited to a fairly particular audience. Its complexity means that strategy fans at least will find it intriguing.

Golem Gates is generous with its content, but is for a fairly particular audience. Its complexity is enough to put off people that are new to the genre, but strategy fans will get a kick out of it.