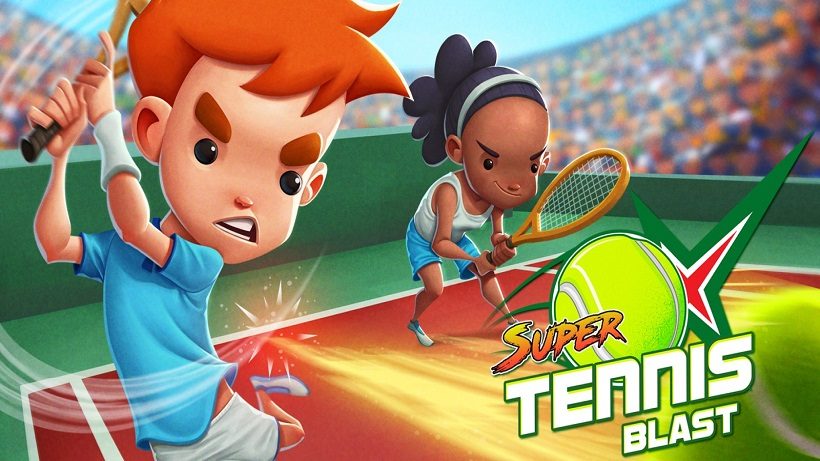 Super Tennis Blast is yet another tennis game for the Switch, and one which doesn’t allow you to recreate a Wimbledon final with someone like Roger Federer, Novak Djokovic or Rafael Nadal. Like in Mario Tennis, accessibility to all is at the core of the experience. Unlike in Mario Tennis, however, you control relatively normal-looking human beings in a colourful, cartoon-esque depiction of tennis.

Familiarising yourself with the different types of serves and returns, you soon find yourself using the most effective shots to gain the edge over your competitor. The tutorial helps to ease you in, and the different modes available gradually increase the difficulty, enabling you to improve at a steady pace. There are no random powerups or special moves to worry about here, so for the most part, this is a game purely based in real-life tennis, meaning you and your opponents can’t utilise any cheap tricks to trip one another up.

Despite its bombastic name, Super Tennis Blast fortunately doesn’t need additional gimmicks to prop up its core gameplay, as there is some solid tennis action available here. The controls are surprisingly responsive, and you never feel like the game is at fault when you lose a point. However, that does not mean the game is a perfect depiction of tennis action – and the reason for this sounds at odds with the previous piece of praise.

This is because the way in which the players are animated is quite jarring at first, as if some frames of the animations are missing. This does not mean that there are problems with the frame rate, though, as the tennis action itself is nice and smooth. Rather, there is a slight disconnect between your actions and that of the character you are controlling, as if your inputs are delayed.

In addition to the traditional tennis modes, there are also a couple of additional ones which, in multiple creative ways, mix things up and provide an interesting alternative. For instance, a collection of tennis-based minigames are available, such as hitting balls toward targets, or into blocked nets, among other arcade-like experiences. These might not have a lot of depth, but are fun detours from the other modes.

The main additional mode that stands out is “Super Blast”, containing “Living Net” and “Crazy Court”. The former retains the normal elements of tennis, except for one crucial difference: the net itself can change its height in different positions. This radically changes the game in such a simple way, as now, not only do you have to respond to your opponent’s actions, but you also need to consider what type of shot to make so that you get it over the net as well. This means that some creative plays are required to hopefully catch out your opponent.

The latter sub-mode builds upon this by not only having the net change, but also the court itself – specifically, the lines which dictate whether a ball is in or out. This shrinks and expands throughout a set, and the combined skill and patience required results in some truly frantic games that really test your skills in an enjoyable way.

For the price, if you’re craving some pick and up and play tennis action, Super Tennis Blast is a perfect solution. If you’re after a more in-depth and “real-life” experience of tennis, however, perhaps you’d be best looking elsewhere.

Super Tennis Blast is a simplistic but engaging tennis game that focuses on the core of tennis, whilst also knowing how to deviate to provide an enjoyable alternative on the classic sport.