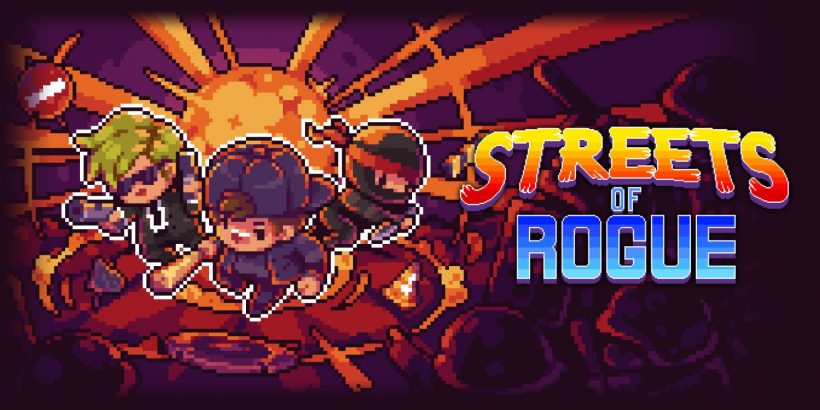 When the people elect a mayor on the pretence of lower taxes and more beer, but he immediately goes back on his word after getting into office, the locals of a procedurally-generated town start causing anarchy and hatch a plan to overturn him. Streets of Rogue tells the story of a newly hired mercenary whose mission is to help the alliance in restoring the city from its corrupt state.

Streets of Rogue plays as a twin-stick shooter. You move your character with the left analogue stick, and aim your arms with the right. Your character can throw punches when unarmed by using the R button, can shoot and throw projectiles using the same button when they have weapons at their disposal. The aiming, however, is sometimes over-sensitive, and made it difficult to get an accurate shot.

Each level of Streets of Rogue brings with it three objectives, and these can have the player seeking out a particular character, tracking down someone that needs to be killed or finding and collecting a certain item. There’s no one-track solution to getting these missions completed, so you can feel free to go through a level all guns blazing or take the pacifist approach and sneak your way past, depending on your preferred play style. Different character types, such as soldiers and thieves, help for more immersion with the play styles.

As is often the case in roguelike games, dying has its consequences. It’ll strike fear into the hearts of those who aren’t genre enthusiasts, but dying means you’re going to be starting over – from the beginning. As you complete missions your character can improve some of their attributes, including their health, speed of movement and attack power, which will at least make future runs through the game a lot easier.

Streets of Rogue‘s 16-bit visuals look great for the most part, but things can be difficult to see due to a lack of detail, particularly when playing in handheld mode. There is a slight overuse of dark colours and shadows, which won’t do your eyes any favours given all the squinting that forces you into.

It must be noted that Streets of Rogue is one of those games that have made it to the eShop, like the likes of Axiom Verge, which have a dev team of approximately one person behind them. Matt Dabrowski has impressed with the sheer weight of all the content that’s been included, with a choice of single-player, co-op or online to suit your playing taste, and a whole host of different modifiers and loadout and character tweaks makes for some very wow-inducing stuff.

While fully playable in single player, Streets of Rogue is very much crafted as a multiplayer experience. Both local and online multiplayer accommodate up to four players, and playing with a friend in tow offered a much easier and more enjoyable experience than playing it alone.

Streets of Rogue is a fun game with a hilarious plot. Besides a few understandable design issues, we’ll hazard a bet that you’ll definitely have a fun time. Just be aware that the game is designed with multiplayer in mind and becomes a more fully-fledged experience when played with others.

Streets of Rogue is a deep and detailed rogue-lite. Much better with friends than on your own, there’s plenty of content to be seen here.