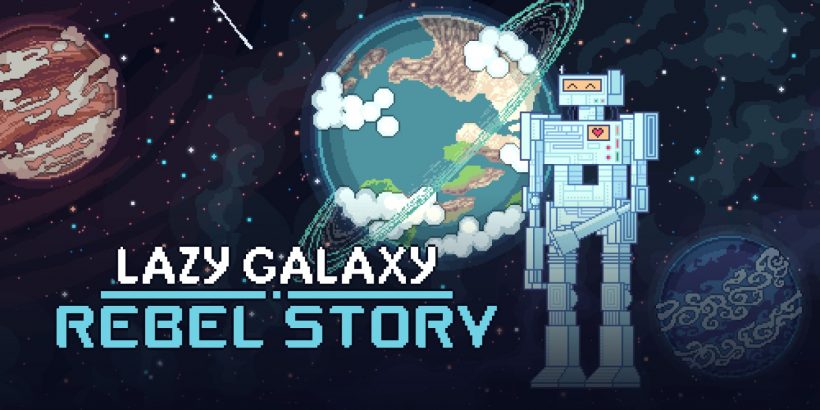 A member of one of the classic genres of gaming has made its way to the Nintendo Switch with some new bells and whistles. Lazy Galaxy: Rebel Story is an arcade shoot ‘em up experience in which you take control of a robot named H-34-RT. You are woken up to the shock of your entire civilization having been destroyed, and it is up to you to try to fight back as the last man (or robot) standing.

You will find friends along the way that have been captured by the evil O’Xelg, the aliens that destroyed your homeworld, and with the help of your various cohorts, you will push your way through the enemy ranks in order to maintain the defense protocols you are embedded with.

You will make this journey solo, or with a friend in local couch co-op action. This title is squad-based, meaning that you won’t just control your own ship, but the ones of the comrades you collect along the way.

This allows for the bullet hell action to really ramp up, but it also means you have a lot more to keep track of, between your special moves, and avoiding enemy projectiles for multiple ships rather than just the one. To aid in this, you can switch up the formation your set of three ships take through the battlefield, allowing for some customization and strategy.

Beyond that, Lazy Galaxy is a pretty straight-forward SHMUP with all of the qualities genre aficionados will want. For the layman, it’s another frustrating arcade title from yesteryear that will bring on repeated deaths and a serious lack in interesting gameplay diversity. If you enjoy repetition and going for high scores then as you can imagine this is something you will probably enjoy, but for people who don’t feel nostalgic for this experience there isn’t a ton to offer you.

You have some additives that try to divulge from the classic way of making these games, including changes to ship customization, allowance for multiple ships, and added story, but being the type of game it is, you can have a hard time getting to those portions of the game if you aren’t skilled at playing these types of titles. Luckily, they did add in difficulty options, including a Story Mode for those that don’t have the skill or background in SHMUPs, as well as a Normal Mode and Insane Mode for those looking for more intense action.

At the end of the day, here you have another clone of a now outdated genre, that tries its best to add in enough new to be an experience that comes to modern gaming with a positive reception. However, the game still lacks a lot of the polish and depth necessary to set itself apart from the experiences that have been born out of the classic arcade titles.

I will say the game has some charm with it’s quirky characters and interesting art style, and the added mechanics will be something genre veterans will probably have a great time diving into, but I just couldn’t find enough positive qualities to say that I had a good time. Nothing wrong or broken here, just a product of an era that we have long moved past.

Lazy Galaxy: Rebel Story takes on the classic SHMUP formula, adding story and new mechanics to try and take the genre to new heights. Sadly, the systems don’t divulge enough from the mold to create a truly unique experience.