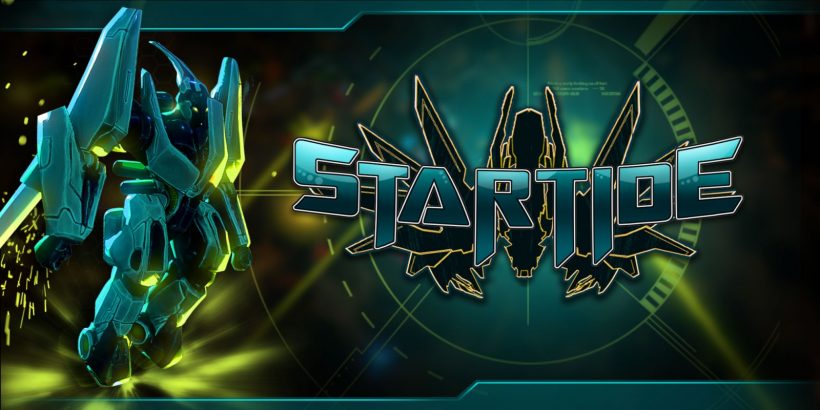 With the Switch becoming somewhat of a haven for fans of the shoot ’em up (or shmup) genre, Startide is another that has thrown its hat into the galactic ring.

Startide sees you take on powerful enemies and procedurally-generated ships as you explore the galaxy on behalf of humanity. You start by securing a location for your home base in order to prepare a power source, and from there, along the way you will encounter new and more powerful alien races, each with their own gimmicks and weapons.

The gameplay follows a simple formula. You select a planet and battle a large modular spaceship, and sometimes more than one. The stage is won by whittling down the ship by shooting at its extremities as you slowly circle it and avoid its rain of incoming attacks. Eventually, when only the core part of the ship remains, you can destroy it. This would sound fun to me, and to be fair, it was for the first few levels. But unfortunately, every stage just feels like more of the same.

Due to the game’s modular design, as the fight progresses there are fewer and fewer weapons, hereby making the fight easier rather than increasing the challenge — and therefore adding to the tedium. There are some breaks to the formula wherein you are tasked with destroying cargo ships and stealing the crates, but even that didn’t manage to shake the stale feeling. Startide also includes a two-player co-op mode which allows you to play similar stages with a friend, adding at least something different to get stuck into.

The procedural generation of the spaceships is unpredictable, naturally. There were times when modular parts generated inside one another, and other moments where the game and this reviewer had differing opinions of which module was the outermost part. These issues made the game feel frustratingly unfair on the occasions where I rolled lucklessly on the generator dice. To add icing to the already disappointing cake, the promise shown towards the beginning of my playtime was crushed hardly an hour in.

I kid you not, the menus were challenge enough without even needing the rest of the game. Press the D-Pad once? Move the selection two slots to the right. It was horrendously frustrating. Switching out your skills and power-ups requires patience and a delicate touch, but not too delicate, or the menu won’t respond at all. It was bad to the point that I dreaded finding new items for fear of having to return to the mech customisation menu. It should also be added that this game does not support touch screen in any way, so handheld players will suffer here too.

The game does, however, run reasonably well on the Switch in both docked and handheld modes. There were very few slowdowns of note during the playthrough, and occasionally, believe it or not, did get some enjoyment out of the game.

When it comes to the art, the backgrounds in general are of a very low quality; bland and forgettable. You sense a theme by now, I’m sure. The music follows suit, in being quite forgettable and unremarkable.

Startide isn’t a game we can honestly recommend. Even genre enthusiasts will have a tough time placing this in their favourite pile.

Startide is a mess of failed potential. While there may be fun to be had, its issues in relation to control and handling, amongst other mishaps, put it in the not-recommended pile.