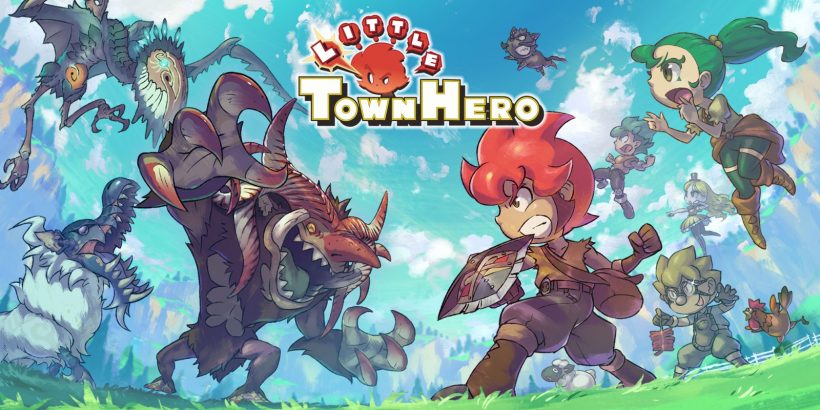 When the MVPs of role-playing games on Nintendo consoles announce a brand-new IP, us gamers owe it to them to take note. As bold now as they were back in the 90s, the Game Freak development team have sought, once again, to redefine the nature of RPGs as we know it. The latest product of the ‘Gear Project’ initiative, Little Town Hero represents the collective imagination of a group of creators who want to provide a unique gaming experience in a crowded, content-rich marketplace.

With a ‘compact story progression designed with the busy gamer in mind’, Little Town Hero casts you as Axe, a young upstart from the village where nobody is allowed to leave. Axe has grand ideas of seeing beyond the castle to the world outside, and no sooner than being introduced to this storyline, you’re thrust into the perils of village life and the strange goings-on that are happening there.

The first indication that Game Freak’s vision has been realised is through the early introduction of ‘Izzits and Dazzits’. These aren’t just a fresh lick of paint on a tried and tested turn-based battle system, and the ‘idea’ behind the combat system of Little Town Hero is brimming with creative expression. Gone is the need for levelling up in the more traditional sense, with level grinding making way for strategy and challenge. Each battle begins with Axe surrounded by ‘ideas’ – effectively attack options to defeat your opponent. Each idea, or Izzit, has both an attack and defence score, and selecting an idea from the wheel then pits it against the monster’s idea to see which is the most successful, thus changing the Izzit to a Dazzit.

Similar in design to common card games, if your idea comes up trumps, it ‘breaks’ the Dazzit and removes it from play. There are complexities to the system which can be a bit overwhelming, but it isn’t long before you’re praising the intuitive system, and commending Game Freak for making the complex seem both simple and second nature.

Aside from combat, most of what Little Town Hero has to offer has been seen before. There is a small village and surrounding area to explore, NPCs to receive quests from, and a storyline which often veers into unusual, but comedic, territories. It is all done very well, without ever breaking new ground, and is indicative of a company who know what makes for a good RPG.

Where Little Town Hero does excel is in its visuals and soundtrack. The game looks fantastic, with vibrant colours and inventive points of interest making the village a delight to explore. That being said, some of the finer details are lacking in polish, and the NPCs that aren’t as important to the story progression have all been given the same makeover. As well as this, the camera angle is often at odds with the player, and more freedom to manoeuvre it would have been beneficial. The Toby Fox composed music is atmospheric and upbeat, proving to be an excellent accompaniment to the action.

Game Freak set out to create an RPG experience like no other and have duly delivered in some areas. The battle system is a fresh take on the genre, and the ability to complete it within 15-20 hours is great for players who struggle for time. Both the storyline and visuals could have been more finely tuned, but it is an excellent experience overall.

Representing yet another step forward for the RPG genre, Little Town Hero brings something fresh and engaging to the table. It perhaps needs more polish, but Game Freak are on to something special here and a sequel would be welcomed.