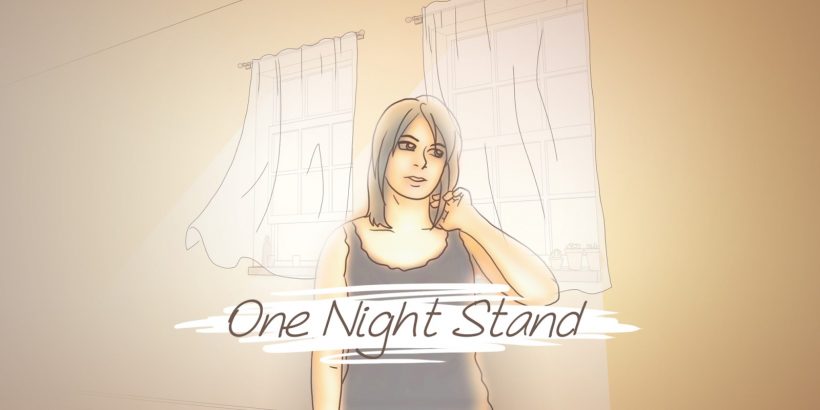 If you’re of a certain age, chances are, you’ve done it. After a wild night out of drinking, dancing and partying, you’ve sparked a sudden connection with a total stranger, and one thing leads to another. The next thing you know, you’ve woken up in a strange room with this strange person, without any memory of how you got there.

Yes, a One Night Stand is the subject of this short ‘choose your destiny’-type visual novel from Ratalaika Games. The decisions you make at around ten points in the narrative determine the ending you get, with twelve altogether to find. To find them, you need to experiment during different playthroughs by picking different options, from choosing whether to answer your phone, to competing with your conscience to decide whether to ruffle through your awkward bed partner’s stuff.

What’s a little bit irritating is that no matter what you decide, the story is never fleshed out to a satisfying degree of detail. The first time you play, you’ll be expecting the ‘right’ decisions to save your situation, and generate a blossoming relationship with the mysterious girl in the bed. But, after a short series of dissatisfying interactions with her, you’re out of the door.

Thus, the aim of the game is either to piss your one-night lover off to such an extent they show you the door right away, to maintain a civil relationship, or to push for more, though this last option is pretty unfeasible, with only one ending leaving the door open for any continuation of the relationship in the future. You start off waking up and feeling groggy due to your alcohol consumption from the night before, and your friend blows up your phone for you to explain your sudden disappearance.

The unknown girl to your side also wakes and leaves the room hastily, giving you scant time to either search the room for your clothes, or to pry through your host’s stuff to find out more about her. Some objects are personal, from her diary to her laptop, while others are less so and provide for less dangerous topics of conversation. You can choose to rifle through her purse to try and find some ID, or be more honest and admit that you don’t remember her name. In more unexpected option choices, you can put her panties on, or just leg it into the street without even bothering to take your clothes.

It would be preferable though for a bit more character depth. Yes, the girl must leave the room several times in the storyline to give you the opportunity to go through her stuff, but she’s not around for long enough to be likeable, and it’s as if there’s a negative message trying to be told about one-night stands which isn’t really needed.

Plus, none of the endings generate any real sort of excitement. After you’ve seen one, you can fast-forward all of the dialogue sequences that you’ve already read through by using the R button, so subsequent playthroughs won’t last you any longer than five minutes – even less if your decisions get you thrown out prematurely.

Ultimately, a half-satisfying storyline reward is given if you find all twelve endings, but the charming hand-drawn visuals alone aren’t enough for One Night Stand to deliver a satisfying story, which is what games like this live and die over.

One Night Stand is too short to offer a satisfying visual novel. The emphasis here is on making different decisions to get all twelve endings, but subsequent playthroughs are shorter and nowhere near as interesting as the first.