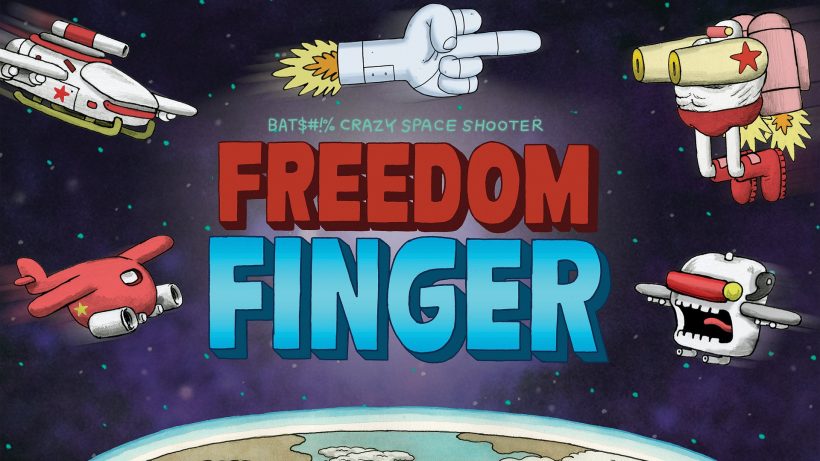 Having no preconceived notions of what Freedom Finger is is, ideally, the best way to experience the euphoria that only a game as bizarre as this can so effortlessly muster. Yet, here we are, putting pen to paper – or fingers to keys, if you’re being pedantic – to peel back the many layers of this metaphorical onion to see whether its content and occasional difficulty spikes will make you cry with happiness or frustration.

Freedom Finger, should it be deconstructed to its core components, is a side-scrolling shooter featuring synchronised music and a colourful, hand-drawn aesthetic. The latter two of those would-be bullet points justify the experience alone, with developers Wide Right Interactive openly expressing their creative liberties to fully embrace the camp wackiness they so blatantly craved from the get-go.

It’s this fondness for the outlandish that make the inclusion of esteemed voice actors Nolan North and John DiMaggio in the game ever more wonderful. As should be expected with this genre, the narrative is largely inconsequential, not providing sufficient motive to play the raw content alone. However, the comedic writing employed throughout makes every scene a delight and something to look forward to; an odd change of pace for side-scrolling shooters.

Playing as a high-ranking pilot, code-named “Gamma Ray”, you control the hand-shaped ship “Eagle Claw” because, well, America. You’re tasked with removing Chinese terrorists from the recently-captured Moon, and rescuing the ever-hilarious Major Cigar’s daughter, who has subsequently been taken hostage.

Such a uniquely-presented title would be for nothing should the gameplay buckle under the weight of its design choices and, thankfully, this is where the game continues to shine. Whilst the usual mechanics are all included, such as powerups to provide shields, refill health and whatnot, the gameplay is fully cognisant that you control a flying hand and, as such, utilises this to its fullest. With the ability to grab enemies for both offensive and defensive purposes, as well as to engage enemies in close-quarter combat, it’s hard not to appreciate the visual spectacle that this game affords.

While the joy of using grabbed units’ weaponry against them, followed by flinging said unit back at them, is unrivalled, the omission of the more traditional, staple power-ups is a shame, and somewhat limits the ridiculous carnage that the game’s peers have generated in the past.

Potentially the standout feature of the game is the varied accompanying music implemented throughout. Each of the 37 levels, split out across twelve different worlds, feature music from various bands – Vanity Set, Vektroid and Red Fang, to name but a few – with each track feeling integral to the overall experience. Whether it be metal, jazz, or anything in-between, the flow of each level is complemented by the many beats and motifs used throughout. Regardless of the varying levels of quality found in the soundtrack, and the fact that some tracks resonate with players more than others, these concepts become negligible when you consider how the music constantly enhances the playing experience.

That said, the music doesn’t stop the game eventually feeling a bit same-y. At times, it lacks the dynamics that keep players engaged, resulting in a potentially short-lived journey. What an experience Freedom Finger is, though, regardless of how long you enjoy the many delights it bestows upon you. This is certain to be a cult favourite despite its few flaws, and I’m glad to have experienced it at the beginning of it’s inevitable rise to unknown stardom.

Freedom Finger is, potentially, the best game of 2019 that will largely – and wrongfully – go unnoticed. From start to finish, regardless of whether you make it to the narrative end or not, it’s an experience that shouldn’t be missed.