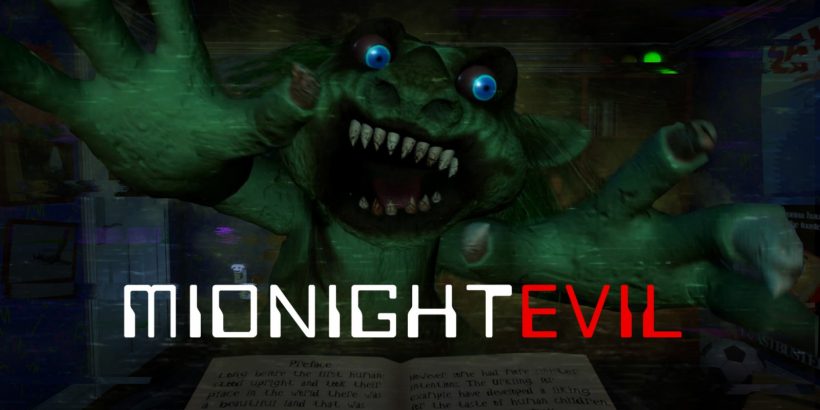 It’s that time of year again. Nights are getting longer, days are getting shorter and the clocks are going back. But something just as sure as those phenomena is that the eShop will get an influx of new horror games.

Midnight Evil is one of the entries in the 2019 collection. For those who played Shut Eye last year, there’s a little similarity between the two titles in that they’re both set in a bedroom. Like in that game, Midnight Evil has no free movement around the room, but as time passes by the threat level, and your sanity, will shift. The gameplay here consists simply of looking around the room and trying to read a handwritten book, which at first appears to be a bedtime story, by looking downwards and pointing the camera towards it. The book is then read aloud by a voice actor, and as each sentence is completed, its words become illuminated in purple, indicating the point for the reading to continue.

But it’s not as simple as just staring at the book and reading it from start to finish. Of course it isn’t. Hearing the scary game tropes of bumps in the night, doors slamming open and windows creaking upwards means that you’re not alone in the bedroom. The solitude is broken by the Urklings, the little goblin-like creatures which are the subject of the horror story book in your hands.

The first time the player sees one, chances are they’re going to turn away and encounter a quick-fire game over. It’s only through reaching a certain stage in the book that you find out that the way to repel the Urklings is to look directly upon them. Once you’ve figured that out, you know the entire premise of the gameplay, as things don’t get any more complicated.

The difficulty comes in knowing the tells that an Urkling is in the room. They will appear on the completion of a sentence in the book, at which point you’ll have a split-second to glance around the room to check whether any of them have joined you.

But it’s not as easy as just having one to look for — you can have three, four, or even five at a time at the most difficult points, and looking at one may cause another to appear. It’s only definitively safe to continue with the reading when you’re 100% sure that there aren’t any creatures remaining in the room, or you’ll have a jump scare of one of them appearing and, seemingly out of nowhere, ending your game.

Luckily, the game is split into chapters and completing a chapter works as a proper checkpoint. But some chapters are longer than others and it can be particularly annoying to get to the final sentence of a chapter feeling like you’ve been undone by some unfair game design. You can be looking right at an Urkling and, rather than it shirking away, it will leap towards you. Or, you can have two Urklings right next to each other and be unsure as to which to look at first to ensure the other doesn’t get you. It’s a small irritation, sure, but in such a short game, it stands out more than it might otherwise.

Midnight Evil is an alright, if brief, horror experience. Short enough to take down on Halloween night; it might be worth a look if you’re looking for something to fit that purpose.

Midnight Evil offers some jump scares but little in the way of variety of gameplay. A short experience that’s not really competitively priced on the eShop, but is recommended for a Halloween night playthrough.