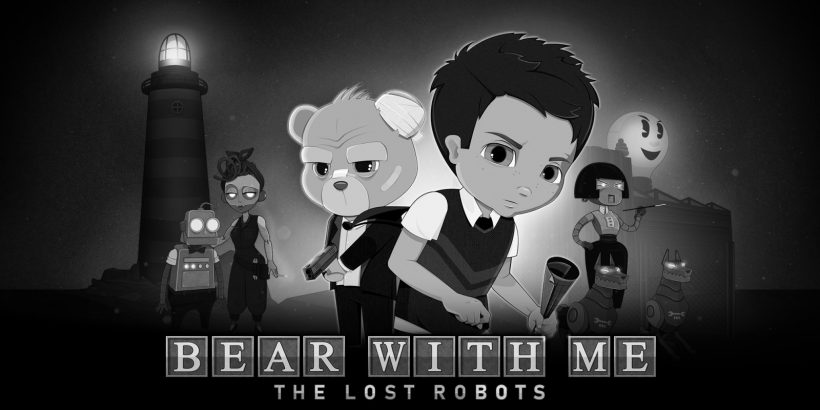 Point-and-click games can be a mixed bag. While you won’t find any shortage of them around, there’s little doubt that finding one that balances engaging gameplay, an interesting narrative, and good pacing is not easy. Given this challenging landscape, Bear With Me: The Lost Robots is a refreshing change, ticking most of the aforementioned boxes and providing a fairly solid experience.

The prequel to the episodic point-and-click series Bear With Me, The Lost Robots is a noir-inspired detective game that has its tongue firmly in cheek from start to finish. The game follows a young boy, Flint, and Ted E. Bear, a gruff, tough, hardboiled detective (who just happens to be a stuffed toy bear) as they investigate a string of robot disappearances that’s been plaguing Paper City.

This short, enjoyable adventure will see you exploring everywhere from the seedy jazz bar downtown to the Robot Union and everywhere in between. Along the way you’ll meet a vibrant cast of characters whose colourful personalities illuminate this black-and-white city. The overdone and trope-y characterisations work surprisingly well thanks to clear attempts to subvert these stereotypes – you really can’t take things too seriously when the tough-talking, weathered lead character is quite literally a talking teddy bear.

Unfortunately, though, there are a few notable exceptions to this well-handled subversion, where the result lands somewhat closer to distasteful than ideal. For example, there’s little subtlety or tact in naming an overly-caricatured and obsessive character O.C.D. and requiring you to purposefully trigger their compulsions as a way to advance the plot. Moments like these may not be frequent in The Lost Robots, but they do stand out as memorable for all the wrong reasons.

There are plenty of other familiar tropes in The Lost Robots – such as our detective’s predilection for booze (sorry, ‘carrot juice’), the femme fatale love interest, a grisly ‘murder’, and dodgy double-crossing – but despite this, the game takes itself seriously very little. It’s terrible puns and exaggeration galore, and at first it seems like a lot. However, partway through it all starts to make a bit more sense thanks to a cutscene which provides some additional narrative context.

Without spoiling the plot, it’s enough to say that the worldbuilding turns out to be surprisingly more complex than you might expect at first glance, and it’s this unexpected depth that transforms The Lost Robots from a run-of-the-mill point-and-click to one that will stay with you.

In terms of the gameplay itself, the puzzles are decent, though occasionally the solutions are far from obvious. At such moments, there’s bound to be a bit of frustration, but because the controls don’t really allow you to brute-force your way through problems easily, it can sometimes be slow-going. That said, when you’re not stuck on an unintuitive puzzle, The Lost Robots successfully manages to maintain some solid momentum. The plot rolls at a reasonable pace thanks to the puzzles not overstaying their welcome, and the many narrative cutscenes – complete with their striking art direction and distinctive voice acting – help to bring the world to life.

Bear With Me: The Lost Robots is an idiosyncratic game, but it manages to achieve an impressive balance between the grittiness of a hardboiled detective story and the whimsy of childhood imaginings. By all measures it’s an odd combination, but if you can look past its handful of shortcomings, you may just come away pleasantly surprised.

Bear With Me: The Lost Robots manages to avoid many of the pitfalls of the point-and-click genre. A few flaws take some of the shine off, but if you’re a fan of the genre you’ll likely enjoy this one regardless.