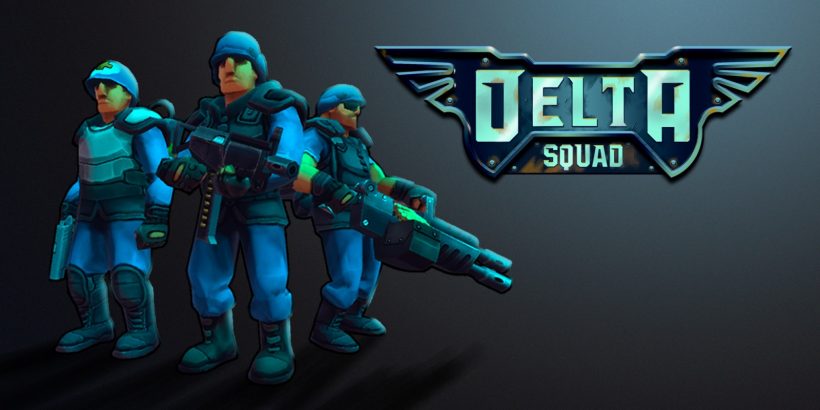 Delta Squad is a top-down, twin-stick shooter from Eskema Games that takes the lauded Delta Squad from fighting alien invasions in FullBlast to taking on an evil general while pushing through hordes of infected zombies. This busy group of soldiers will enter five levels where you will take on 50 missions to stop Rumanovsky’s threat of global domination. With inspiration from titles such as Dead Nation and Helldivers, it would make sense to be excited about this game, but without the charm and story of those titles, this feels more like a little brother to those other games, rather than something that can stand proudly next to them.

The story is not something that is going to win a Pulitzer but is offered to you nonetheless. Building the Delta Squad as a team that passes through not only different titles but also in altogether different genres is a unique idea but falls short, as the stories in each title are so vastly different. FullBlast was an arcade-style vertical shoot ‘em up where you were fighting an invading alien menace, but Delta Squad has you fighting zombies and seemingly Eastern European enemies that are trying to take over the world. I like the idea of swapping genres but having this connected world between titles needs a little bit more congruency than what is offered. Besides the fact that this team is talked about as some elite unit used for all matter of engagements, you are pretty much left to run with the story in your own way, if at all.

The structure of the campaign is very fast-paced but with little explanation as to why you are doing whatever it is you’re tasked with. Each of the five levels can be accessed at any time, so there isn’t really any actual story coming from progression. As you begin you are told to kill a certain number of enemies, which is your first “mission”, followed by random tasks that have you moving through the stage, usually just running into things on the ground and progressing to the next objective. None of it is all that thought out and provides nothing but monotony from start to finish.

Playing this one solo is a slog. Intended as a multiplayer title, you can play local co-op with up to four players. As a team, this one operates much more smoothly, but alone you will find you are left to take on some pretty steep odds at times. As four classes are offered to play as – each of which with its own speciality – you will be hindered by not being able to do what the other classes have at their disposal. For example, gun turrets litter the stage and are extremely tough to take down with the base soldier unit using their rifle. Grenades don’t work well against them, so you are forced to spin around in circles, avoiding their fire, while trying to get their health down. However, an engineer class can simply take down enemies of this type, meaning you must make some serious concessions in solo play.

All in all, Delta Squad is a lackluster example from a genre filled with modern iterations of exemplary quality. Lacking in depth, fun factor, and a meaningful story means this one has very little to offer most players. Hardcore fans of the genre might have something positive to take away, but everyone else can probably move on.

Delta Squad offers a twin-stick shooter experience that falls short of expectations. With lacking story beats and boring gameplay it comes to the Nintendo Switch more dead on arrival than the zombies you will be slogging through.