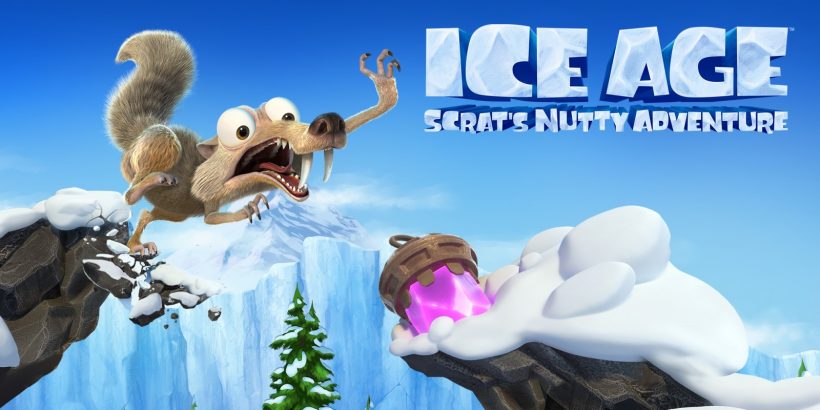 Do we have any Ice Age fans out there? Outright Games have been bringing a ton of different licensed games to the Switch platform recently, and this time they’re bringing developer Just Add Water’s take on everyone’s favourite pre-historic squirrel-thing, Scrat. It’s become expected at this point that a game launching on Xbox, Playstation, PC and Switch simultaneously might take a hit performance-wise on Nintendo’s handheld, but the Nintendo downgrade makes what was already an uninspired licensed platformer seem even more ancient. Also, maybe I’m off my nut, but don’t licensed games of this nature typically release alongside a film or TV show?

The premise of this movie spin-off is simple: the game starts off just as any other Scrat day would, with him clutching onto his prized acorn for dear life, only to somehow clumsily drop it and trigger a catastrophic turn of slapstick events. This time, he’s stumbled onto a precarious temple belonging to the mysterious ‘Scratazons’, who will send him on a quest across a variety of different terrains and platform challenges in order to regain his prized nutty possession. It’s a simple-if-monotonous platformer with some easy puzzles and arbitrary combat, but a few set-piece scenes and boss battles (which will be familiar to those who have seen the films) spruce it up slightly.

Scrat is quite the downtrodden character in the Ice Age movies, but here he actually has a fair amount of platforming and combat skills at his disposal. Levels are large in scope and have different collectables to look for with references and cameos, but they still are quite linear and straightforward. The music is pleasant, but there are some outstanding issues that could have done with a bit more polish. The sound on the flying bug enemies that you fight, for example, is so horrific that you desperately want to take them out just so they’ll be quiet.

Right away when starting up Scrat’s Nutty Adventure, you’ll notice that the performance leaves a lot to be desired. The framerate is constantly close to extinction, frequently freezing – and not in an Ice Age kind of way. The handheld mode in particular is so bad that it affects the platforming in some respects, so if you’re a Switch Lite player, it’s a no-go straight out of the gate. It reminds me of when you try to run a PC game on a laptop, and honestly, for a full retail game that’s aimed at kids, it’s far from ideal.

These major setbacks are a shame, as in some areas the game shows promise. The look and feel of the Ice Age franchise is captured quite well; Scrat feels authentic in his animations and he sounds as if he’s just stepped off the silver screen. Ultimately, however, hearing his constant little murmurs and whines as you’re hopping around does little to paper the cracks of disappointment found in the gameplay.

Overall, even before the issues, Scrat’s Nutty Adventure would be a middling, repetitive platformer, and you could do much better on the eShop for the hefty £34.99 price tag. The prehistoric performance in the Switch port just makes it that little bit worse than the other console versions, particularly in handheld mode. For parents perhaps buying their child a Switch Lite and looking for a kid-friendly game in the lead up to Christmas, go for Super Mario Odyssey or even Crash Bandicoot if you’re after a similarly erratic mascot.

Ice Age: Scrat’s Nutty Adventure captures the essence of the movies and Scrat’s erratic mannerisms accurately, but the uninspiring platforming and awful performance make it a port worthy of extinction. So what killed the dinosaurs? In this case, the framerate.