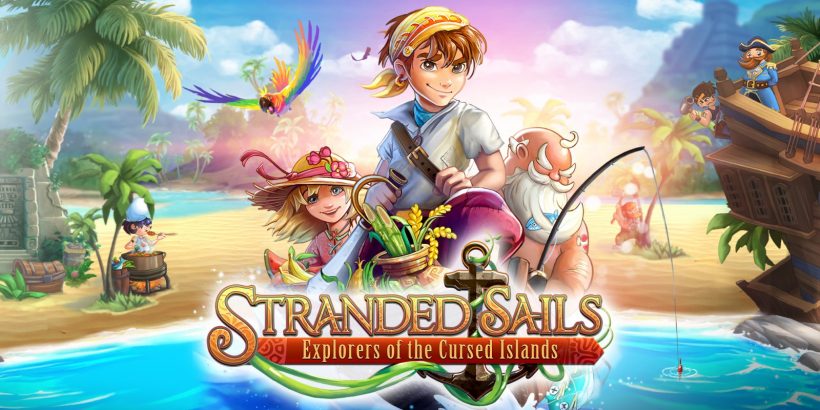 Ever since Stardew Valley brought back an experience akin to the classic Harvest Moon, the farming sim genre has seen a kind of renascence thanks to indie developers trying different ideas within the genre. Some games, like Graveyard Keeper, opt to use the same formula on a unique setting. Others, such as Yonder: The Cloud Catcher Chronicles, tries to mix in elements from other genres. Stranded Sails: Explorers of the Cursed Islands follows this second approach, becoming a more exploratory kind of game – even though it hurts the more typical farming sim elements in the process.

As the son or daughter of an old captain, your adventures in Stranded Sails begin after a short introduction where a trip to a faraway land is interrupted by a sudden and mysterious shipwreck. Awoken on what seems to be a deserted island, you must do your best to survive, all whilst trying to regroup the scattered members of your father’s crew. As you do that, you’ll start to develop a kind of small village with an ever-growing list of activities, which includes farming, crafting, and cooking, among others.

All of these activities will slowly be unlocked as you find the lost members of the crew. During the first hours of your campaign, this progress will happen at a slow pace, following a strict and linear rote. Talk with a character and they’ll give you a quest: go explore a new island, find a new crew member, and unlock a new ability. Unfortunately, this sequence of actions repeats itself, becoming quite repetitive with time – especially at the moments where you start to struggle with Stranded Sails’ most limiting feature: your stamina bar.

Using tools, working on your farm, running, and even walking will slowly drain your stamina. Consequently, you’re always being limited on how much you can do or explore every single in-game day. Due to how fast your stamina bar is depleted, this can become a true hindrance. Before exploring faraway islands, for example, you must carefully plan your route, as well as filling your inventory with cooked meals (which can be eaten to recover your stamina). For a game with such a focus on exploration, Stranded Sails creates far too many obstacles for you.

This wouldn’t be such a problem if the farming elements of Stranded Sails weren’t so underdeveloped. Different than a farming sim such as Stardew Valley – which has a complete economic system, where you have all sorts of upgrades for your farm and tools – improvements in Stranded Sails are all story-related. Therefore, the only purpose of the farming elements is to gather materials to cook. Cooking, on the other hand, is only useful to recover stamina. Each activity seems to have a single and limited objective. In the end, it creates a kind of loop that isn’t nearly as appealing as with a focused farming sim.

It is such a shame that the many elements of Stranded Sails – exploration, farming, crafting, etc – are so limited because the game prevails when it comes to its presentation. With its cute low-poly 3D art style and a nice moody soundtrack, it could be great to explore the so-called cursed islands. Sadly, due to a focus on linear fetch quests, and limiting survival mechanics, it results in a game that is smaller than the sum of its parts.

Stranded Sails: Explorers of the Cursed Islands proposes to blend farming sim elements with an adventure focused on exploration. Unfortunately, due to its simple mechanics and limiting stamina system, it falls short on both of its main purposes.