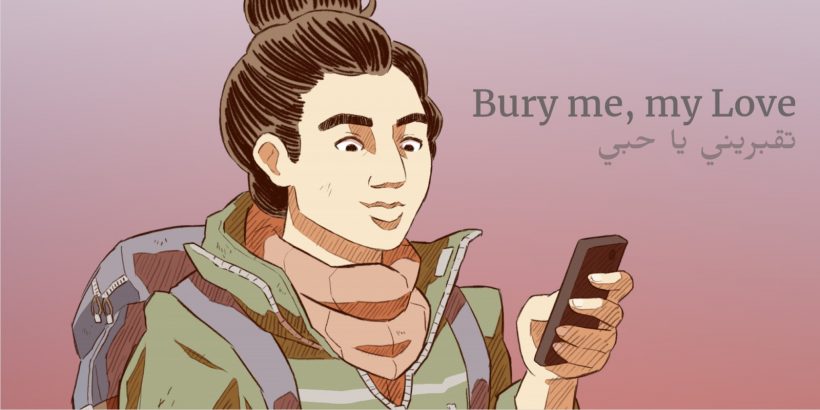 A moral struggle isn’t utilised with as high stakes in many games as it is in Bury Me, My Love.

This Pixel Hunt game, which was recently free to acquire on the eShop for anyone who had previously bought a game from publisher Plug In Digital, is a text messaging narrative-driven story where the player makes minimal contributions to the plot, but the responses that are offered will have a profound effect on the person receiving them – on their actions, and their journey across the globe.

The subject matter for this is a particularly emotive one. You play as Majd, the husband of a Syrian refugee looking to make her way to safety in Europe. Migrant wife Nour will report back the things she sees and experiences along her journey, and you as Majd must give her advice on what to do in certain situations. You can follow her progress through the maps app on your phone, but there’s very little interactivity at play here – your controls are limited simply to choosing reply options and keeping track of where Nour has got to. There are fifty different locations that Nour can visit, and nineteen potential endings, but you’re unlikely to play the ninety-minute story through again to get the ones you missed.

You’ll need to develop an emotional attachment with Nour to be fully gripped by the story, and your ability to do that depends on the strength of your imagination. Information, other than the story’s closing line, is all delivered through text messages on the screen, with just one short bit of voice acting at the end. That jarring and sudden introduction of Nour’s voice stands out, and it probably does so for a negative reason — that being that you’ll have probably grown tired of the story and lost all interest by the time it comes along. The story is occasionally interrupted with picture messages, but the illustrated images do little to evoke a sense of emotion or sense of empathy with the characters if you weren’t already on board as a result of the text messages themselves.

Music also seems to come and go as it pleases. Whether that was done intentionally to draw attention to Nour’s most vulnerable moments is unclear from playing the game, but if it was, it actually had the adverse effect of prompting me to draw my eyes away from the screen. As soon as the soft and delicate backing music returned, my attention was back on the Switch. There really should have been something else going on sound-wise to keep things interesting as there’s only so much of the typing sounds and the message-received bings that players can reasonably take.

Bury Me, My Love is a story which clearly tries to invoke empathy for its characters, but the medium just never seemed to fit that purpose. With a heavily one-way conversation, this feels more like Stay, which similarly bored by having the user’s contributions to the conversation kept to a minimum. The Lost Phone games, which are the best example of this kind of game available on the eShop, at least had something more of a game element to them, requiring you to use the phone in clever ways to solve puzzles. There’s none of that at play here, which makes the game come across as more of a lecture than it might do if there was an engaging gameplay hook used to hammer home a message more effectively.

Bury Me, My Love lacks the necessary amount of player interaction that it needs for its message of compassion for the plight of Syrian refugees. The story wasn’t engaging enough to retain the attention once the game reached the halfway mark.