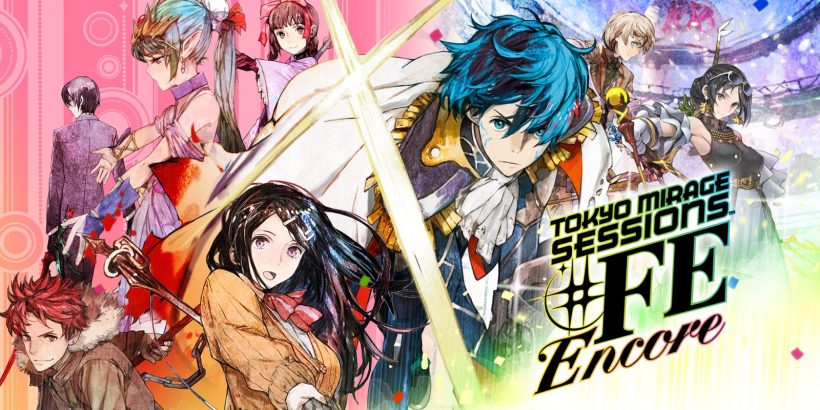 “Next, choose a setting for Tsubasa’s glasses.

You can decide whether Tsubasa Oribe, one of the game’s cast appearing in the story, should wear glasses as part of her casual outfits. (This will not affect the story in any way.)

You can adjust this setting at any point during the game from the Settings menu.”

To summarise Tokyo Mirage Sessions #FE Encore, you need look no further than these opening lines from the latest release by Atlus and Nintendo. This is one of the first choices you make, alongside difficulty setting and the like, and gives a clear indicator as to what Tokyo Mirage Sessions might be all about. In short, it is wacky, weird and downright wonderful.

A Wii U port of the cross-over RPG from Atlus, TMSFEE is a combination of gameplay, storyline and art style from two beloved franchises: Fire Emblem and Shin Megami Tensei. For seasoned veterans of either series, the announcement at the Nintendo Direct in September of 2019 was met with delight at what some argue is the greatest game to come from the Wii U era. To those less knowledgeable of the two series, the hype surrounding Fire Emblem: Three Houses means Tokyo Mirage Sessions will have piqued interest – rightly so.

As a turn-based, tactical RPG with a LOT of personality, Tokyo Mirage Sessions is an engaging if unconventional role-playing game that is as deep as it is shallow, and as fresh as it is familiar. It is greater than the sum of its parts, with the individual elements of TMSFEE rather odd on paper, but when combined, the beauty of the game becomes apparent.

Setting the scene for the 40+ hour RPG is modern-day Tokyo with an interdimensional evil that has invaded to wreak havoc. What ensues is an all-out war in which you and your eclectic cast of soon-to-be stars of the entertainment industry journey through Idolaspheres to fight back and save Tokyo and its inhabitants. It really is as unusual as it sounds, however it becomes even more unusual when Mirages, Carnage Unity and Stage Rank are thrown into the oh-so-beautiful mix.

There are times where Tokyo Mirage Sessions represents your typical role-playing game, yet it very quickly reminds you again that this is as unique as it gets. The turn-based battle system is a fairly standard affair with a running order of turn-taking, and skills, standard attacks and items being the order of the day. Where it differs though is in the collaboration between your characters, referred to as ‘sessions.’ If you select a move that is particularly effective against an enemy, it initiates a ‘session’ whereby your other teammates complete a combination of attacks against your foe. These moments are beautifully presented through delightful animations and this is one of the many occasions where TMSFEE really shines.

The aforementioned skills available during battles are developed through Carnage and Radiant Unity – two unique upgrade options that are unlocked throughout the game using items and materials gathered during battles and dungeon sequences. The former is where the power of your battle companion or mirage, manifested as iconic Fire Emblem characters, allows them to transform into new weapons. The latter is when you and your party members grow as entertainers, and these are representative of the two levelling systems available in TMSFEE: Stage Rank and Level. The impact of each of the upgrades is felt immediately, but more importantly, it rarely becomes overbearing or too much to manage – despite what words such as carnage, radiant, mirage, unity and sessions might have you believe.

Representing the RPG genre alongside turn-based battles are dungeons. Themed around the entertainment industry, these offer puzzle solving elements and enemy encounters that appear as cloaked figures you can either fight or swat away. It can be difficult to navigate them at times, but through warp portals and points of interest, it is rare that frustration sets in. The designs are interesting and inventive, even if the puzzles are a little less so. They offer just enough to keep them from becoming too familiar too quickly.

An engaging storyline is often pivotal to the success of an RPG and Tokyo Mirage Sessions does not disappoint. It is here, however, where would-be purchasers of the game will need to think twice. It is bizarre, over-the-top and occasionally a little difficult to follow. Again, an example of how the individual parts of TMSFEE may not have been successful had they not been fused together so well. The personality and characterisation of the cast members and enemies make for an exciting story that many will enjoy.

Accompanying the storyline are audio and visual elements that are cause for celebration. There is an understated beauty to the simplicity of the musical accompaniments between battles, creating an atmosphere that perfectly contradicts that of the over-the-top Japanese action. As well as this, the soundtrack is very much in keeping with the wacky ideas of the development team, yet it still manages to portray the emotions of the storyline well. The official songs that are performed by the cast members during pertinent moments in the game are an absolute delight and prove to be one of the many reasons why the decision was made during localisation for western release that these would remain in Japanese and not sung by English actors.

Visually, Tokyo Mirage Sessions shines best when fully animated, with the vibrancy and detail proving very impressive. The animations and cutscenes during battle are outstanding, and many a time will you hit the screen record button to capture the on-screen action. Even during the less developed sequences, the most notable of which are during free roaming, there is still enough to captivate the player and encourage them to spend as much time there as possible.

For all that it gets right, there are times where the emotion of the storyline doesn’t always translate as well as the facial features and character animations portray. These could be due to the Japanese audio and subtitles, but also in part due to the imbalance of wacky story and heartfelt moments.

No RPG would be complete without side quests and Atlus have provided an abundance of these. They are stand-alone, specific to individual characters, and can be completed at any point within the story once unlocked. This may be deemed a plus for some but for this writer, it feels somewhat of a double-edged sword. It allows for the main story to be developed without interruption, but this means that, at times, they can be seen as token gestures.

When considering that the side quests can sometimes lead you back through Idolaspheres that you’ve previously completed – some of which are linear in design and lacking real substance – it would be easy for the player to start avoiding them. Said quests will then pit you against lowly opponents who become more of an inconvenience than anything else, interrupting flow and failing to offer anything exciting. On the flip side, it is easy to see how a player can be swept up in all that TMSFEE has to offer and relish these opportunities during intermissions. For this reviewer, they were seen more as a hindrance to the playthrough.

Deciding to bring this to the Nintendo Switch was a very smart move, and the ability to save anywhere, change the difficulty on a whim, and come back to it at a later time means it is best-suited to the pick-up-and-play nature of the console. On that note, however, there is a lack of guidance as to what to do next when returning mid-quest. There is little available to prompt the player if you have forgotten the next step and this can prove to be frustrating. As well as this, the RPG ‘grind’ makes an appearance here, and this will certainly divide opinion. When coupled with the side quests which can also interrupt the flow of the story, there are a few caveats to consider when deciding if it is an RPG for you.

In summary, there is little to dislike with this Shin Megami Tensei/Fire Emblem cross-over, mainly because it won’t be for everyone. By the time the trailer is through and a gameplay video is watched, many will have made up their mind on whether or not it is for them. If it is whole-heartedly embraced, as it should be, then it will be appreciated as the outstanding example of creativity and vision that it is.

Tokyo Mirage Sessions #FE Encore will prove to be the Switch game many didn’t know they needed. It’s funky, fresh and full of personality, and is an exciting and inventive opener to 2020 on the Nintendo Switch.