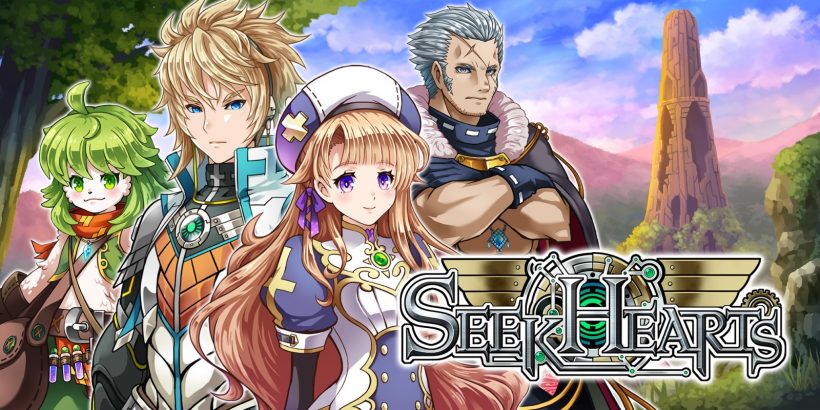 As much as some video game genres evolve and change with time, the old-school JRPG approach seems to never really get old. Start on a small village, go out adventuring to discover your past, gather a small band of fellow adventurers, and eventually defeat the world’s biggest threat. From the classics Chrono Trigger and Lufia & the Fortress of Doom to the more modern Cosmic Star Heroine and Octopath Traveler, each JRPG comes with its own version of this timeless approach. Seek Hearts is not much different. With its comfy turn-based system and interesting world-building, it could have become an equally timeless experience – if it wasn’t so rough around the edges.

Set in a world that mixes fantasy creatures and sci-fi elements in a seamless way, Seek Hearts‘ narrative gravitates towards Izen, a sentient robot that is much closer to humans than others of his kind. After stumbling with part of his past, Izen and his best friend Clara decide to explore the world in search of answers. While far from perfect, Seek Hearts‘ narrative is probably its best aspect. With one single exception, it features a cast of charismatic party members. Add this to a unique approach in how to represent overused themes and the result is a game that manages to keep you hooked from point to point. The only problem here is how the game portrays humour. It does have some funny moments – I just wished they didn’t repeat the same joke dozens of times.

The best you can say about Seek Hearts’ combat, unfortunately, is that it is competent, and nothing more. Compare its turn-based system with any other JRPG and you see that Seek Hearts does tick all the right boxes — characters have a good plethora of skills and spells; you can customize them by changing their equipment, and you can even speed up things with pre-set behaviours. However, it doesn’t create interesting battle situations to force you to plan carefully. Instead, every battle feels bland and unimportant — even most bosses. Its biggest appeal lies in the Skinner box effect: you may want to see your characters becoming even more powerful, with better gear and bigger status numbers.

Outside of battles, though, Seek Hearts finds a cool way to make dungeons more interesting, because each party member has access to certain skills they can use while exploring. As a robot, Izen can interact with mechanical devices to activate platforms. Clara, on the other hand, can use her super strength to open doors and move objects, just to mention a few examples.

When you consider its main mechanics, Seek Hearts could be a game to please JRPG fans. Unfortunately, though, in order to enjoy its most positive aspects, you have to overlook one of the most underwhelming presentations of a JRPG available on the Nintendo Switch. Cities, dungeons and the overworld are all presented with simplistic visuals that are composed of sprite tiles that aren’t connected in a perfect way. This results in weird and messy visuals, and it only gets worse thanks to a repetitive soundtrack. However, it’s not all bad. The anime-style character portraits are nice and add some variety and expressiveness to dialogue. Still, it is not enough to break the impression that Seek Hearts is a JRPG under a budget. At the end of the day, there are better options available on the Nintendo Switch’s library.

Seek Hearts is an old-school JPRG that has some interesting ideas and cool mechanics. Unfortunately, all of its better aspects get buried under rough, messy, and underwhelming execution.