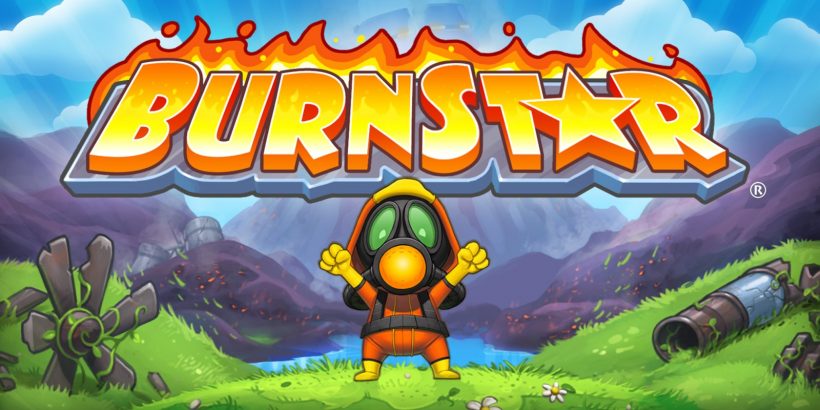 When Evil Inc. spreads noxious goo all over the place, it’s up to professional pyromaniacs Burnstar, Ember, Coldsnap and Toxo to incinerate it.

In Toxo’s words, this puzzle game boils down to two things: “Burn stuff. Collect Stars.” In each stage, players choose between the four heroes – each of which have unique abilities – and burn as much they possibly can. Laid out on each grid are traps, combustible crates and goo, as well as good old explosives.

When you place bombs, they’ll burn nearby items, which reveals stars. Rockets do the same, but can be launched at a distance. The idea is to use each explosive efficiently, collecting up to 100% of the stars (although you only need 70% to clear a level.) Crates explode when burned, and with clever bomb placement, you can make good use of them. Later levels require carefully-timed movements around rockets, spikes and more, as well as utilising the unique abilities of the characters – Coldsnap’s ability to freeze hazards and Ember’s shield make dangerous levels a breeze. I loved using Toxo’s cloning ability to teleport past difficult sequences, and Burnstar’s dash to just get the heck away from baddies. I guess I’m a defensive pyromaniac.

While the game begins with simple sequence puzzles, the better part of an hour was spent doggedly repeating later stages dozens of times over, because I was hell-bent on figuring out how to get every single star. Each level is timed, but this only matters if you want to compare your speed on the online leaderboards. When you’ve exhausted the main levels, there are secret ones to unlock – as well as bonus stages. Bonus: you can blast through any of the stages with a friend in co-op mode. Simply grab another controller, or hand them a Joy-Con.

You can zip through familiar levels like a speed-runner with the snappy controls. However, sometimes I got cocky and hit a trap – or worse, ran into burning goo that I myself had set ablaze. Fire and burning goo will kill you – and goo takes a while to disappear. Several times in my playthrough, I was stuck waiting around for some goo to finish burning so that I could finish a sequence. I will note that the player hit-box feels forgiving and small – something I, for one, was grateful for.

Many levels are preceded by delightfully pun-filled dialogue. That, combined with their tragic backstories and cute portraits, will immediately endear you to these adorable arsonists as they travel from forest to mine to laboratory to stop Evil Inc. While you may want to mute the repetitive music, the 3D stages are pleasing and simple. Unpolished moments like the glitch-riddled rubble and abrupt cuts to restart levels can be forgiven in a game like this, where we are coming for the brain-ticklers, and not a visual masterpiece.

For such a low price, Burnstar delivers a surprising amount of challenge – though perhaps it’s not so surprising when you consider Publisher Gearbox’s track record with big-hitters like We Happy Few,  Hello Neighbor, and a little game called Fortnite. I enjoyed grinding out tough levels on my work commute – not just because completion feels good, but because let’s be honest, burning stuff is the bomb. Even if you beat Burnstar quickly, the game offers infinite replay value with its local co-op mode. Any puzzle lovers who can forgive a few rough edges should consider giving Burnstar a chance.

Despite lacking polish and being short to play through, Burnstar provides challenging puzzles and infinite replayability thanks to the competitive aspect of online leaderboards, as well as its local co-op mode.