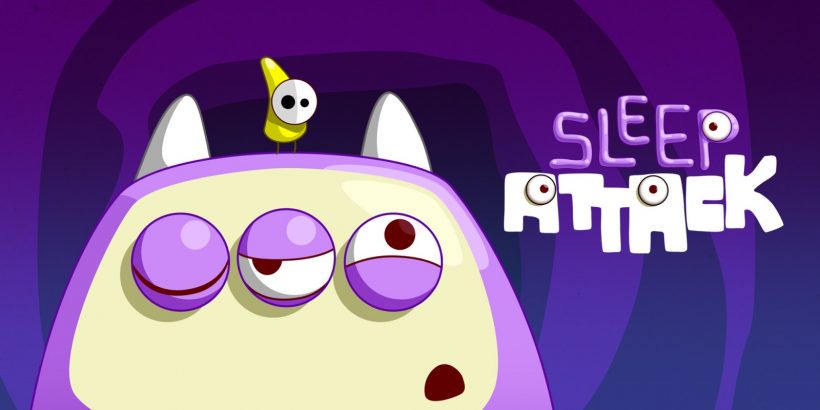 Sleep Attack’s brief pre-game cut-scene tells of how a gluttonous alien overdoes it on the TV-watching and snack-eating, finding themself heading off to the land of nod. Their dreamland is certainly not a comfortable one, however – hordes of aliens begin to bear down on the vulnerable tubster, and the player has to erect towers to gun them down before they get in close.

Yes, this is a tower defence game, but it comes with a twist – quite literally. Players can establish towers on previously determined spots across the battlefield, and the enemies come from any of the four corners of the screen (boss characters later on can appear from anywhere, but they’re naturally pretty uncommon). However, if they’re coming from the top-right corner of the screen, and you’ve set up your best towers at the bottom-left, you’re leaving yourself open to punishment, right? Wrong. In Sleep Attack, you can swivel the battlefield using the control stick or touch screen, so an added tactical element comes in your timing of moving the battlefield.

When boss characters come along, you want to move your strongest units over to wherever they are, naturally, but then a flood of enemies can come from the opposite site, so you need to place your towers wisely in order to neutralise the threat. If you mess up, there is an option to fix the mess as the spinnable terrain is often multi-layered, with the central circle moving in isolation from the outer edges. You can also deliberately orchestrate the enemies’ path so that they have to take a longer route to the centre, and therefore pass by all your central towers to become cannon fodder as they go.

There are some nine different types of tower which you can make use of, each with different capabilities. You use multiple of these in any one game, and will have some of these pre-selected in each level, making you weigh up the pros and cons of the remaining tower spots as far as your defence plan goes. By far the most useful two in this reviewer’s experience were the standard machine gun-like heavy fire option, and another which unleashed a more powerful looping shot. Others emit harmful rays which affect enemies within a certain radius. Each tower can be upgraded using points earned by picking off enemies, with four levels of upgrade available until they become all-out killing machines.

While the turrets are varied, the enemies are even more wide-ranging. There are seventeen types altogether, with some accounting for strength in numbers, while others come in with speed. The boss types approach at a slow pace, but with armour that allows them to take a heavy dose of punishment before succumbing. Levels get steadily more difficult, with more waves of enemies, but your HP is at 20 each time, allowing for twenty enemies to slip through the cracks and strike before you get a Game Over.

Overall, Sleep Attack is a fun experience. After playing the game to death, it was still damn-near impossible to achieve the three-star level score, awarded for managing an impenetrable level of defence, but trying something different each time in order to go about getting that is moreish. While Sleep Attack doesn’t smash every other tower defence game out of the park, its unique aspect of spinning the environment makes it feel like a new experience, and you certainly won’t feel like you’ve seen it all before.

Sleep Attack is a moreish tower defence with a unique mechanic that makes it feel different to those which we’ve played before. It doesn’t reinvent the wheel, but it does insert the wheel into a genre where we’re not used to seeing it.