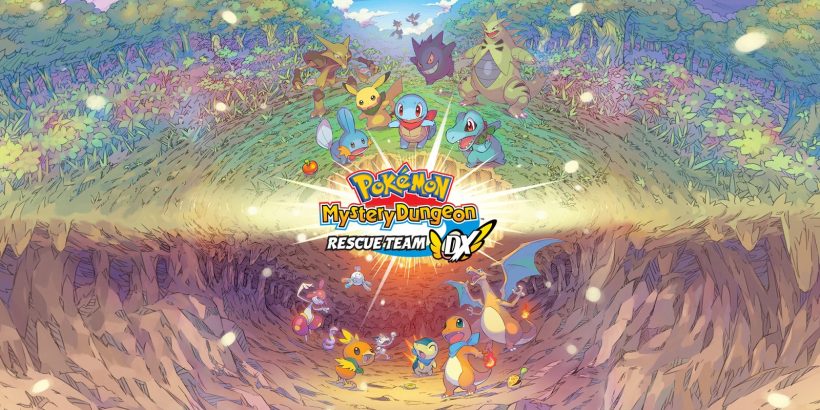 Almost fourteen years ago, Pokémon’s longest-tenured spin-off series received its first game with a cross-platform release across the Game Boy Advance and the Nintendo DS.

Pokémon Mystery Dungeon, in its Red and Blue Rescue Team varieties, saw players actually become a Pokémon, with a personality test deciding which of a small playable number was best-suited to each player. Partnering with another Pokémon, players would then set off on dungeon-crawling expeditions in search of Pokémon or items, with missions and requests delivered via the mailbox and/or the noticeboard at the Pelipper post office.

Both of those games have been resurrected and blended into one in 2020 for Pokémon Mystery Dungeon: Rescue Team DX, and immediately noticeable is the game’s quite spectacular lick of paint. The restrictive graphics of yesteryear have been, pretty much, completely overhauled into a luscious hand-drawn world. The actual Pokémon characters aren’t exactly given too much detail during gameplay, but that can be wilfully overlooked when you see how beautiful the overworld is, as well as the game’s cutscenes, particularly when legendary Pokémon are involved.

Unlike the mainline Pokémon games, this series is about roguelike dungeon exploring. After picking your two-Pokémon team, and filling up your list of accepted requests, you’ll then head off to a dungeon to chalk the requests from your to-do list. These requests can stack up and will be achievable on different floors of the dungeons. So, for example, a Caterpie might ask for you to retrieve an item that might be located on the second floor, and then you’ll need to guide a Pidgey to its lost friend Marill on floor four. After each successfully completed mission, you’ll be given the opportunity to escape with your winnings, or alternatively push on in search of more.

Some rescue missions will appear without notice – a Pokémon may have fainted on floor five, and you can divert your attention from the task at hand in order to go and extract them. Your Rescue Team badge allows you to teleport them to safety, but sometimes they can join your dungeon squad, which acts as a handy relief for your core team members as they can share the dealing and absorbing of damage. But, should your core team members all run out of HP, and you haven’t got any revival items to stop them biting the bucket, you’ll either have to call a real-life friend online to step in and rescue the mission, or you’ll have to retreat and start again at the bottom.

Like in the main Pokémon games, you can make use of any of four different attacks at one time, and can teach your team new moves with the aid of TMs. But with everything occurring within the dungeon top-down view (i.e, the game doesn’t cut to a specific battle scenario like in the main games), you can be battling multiple Pokémon at the same time if they get into close enough range. Clearing them out gets you XP towards levelling up, and when you reach later stages in the game, Mega Evolution can come into play when you’re dealing with the stronger ‘Mon, a new addition to this game over the originals, because obviously Mega Evolution wasn’t even a thing when they came out. The finest new addition, though, is Auto Mode, allowing you to hold down the L button and have your team move automatically through the dungeon, first to objectives, then to items, and then to the stairs when you’ve done everything else. The grid layout of the dungeon means you can often get annoyingly stuck when trying to move from room to room diagonally, and this eliminates that problem.

But you can’t help but wonder if this would be as enjoyable a game without the Pokémon shine on it. The gameplay is highly repetitive – even more noticeably so than in the mainline Pokémon games. Tackling one dungeon expedition per in-game day, the meat and potatoes of the gameplay is about selecting a dungeon to venture to (taking into account the dungeon difficulty and the number of accepted quests applicable to the dungeon, displayed by the list as you choose between them), and then it’s about trekking around the map, filling it in as you go, while running into enemy Pokémon and exchanging attacks with them until one succumbs. This is by no means a short game, so even though the dungeons get a new lick of paint from location to location, the feel is monotonous.

Dungeon crawlers, by their grind-emphasising nature, are a niche genre, whereas everyone and their dog loves Pokémon. That makes for a pretty jarring juxtaposition. The trademark Pokémon themes of friendship and teamwork are present in the dialogue, but the humour feels particularly tame even by Pokémon standards. So, young Pokémon fans could be put off by the grind-focused gameplay, and dungeon crawling boffins could feel somewhat underwhelmed by the safe subject matter. With that in mind, ask fans to explain how the Pokémon Mystery Dungeon games spawned a fifteen-year series, while Pokémon Snap was a one-and-done affair. That’s the real mystery that needs solving here.

Pokémon Mystery Dungeon: Rescue Team DX looks beautiful in all of its lush hand-drawn glory, but the gameplay is still the same repetitive fare that the series has always offered up. There’s a ton of game here, but that’s if your enthusiasm lasts long enough.