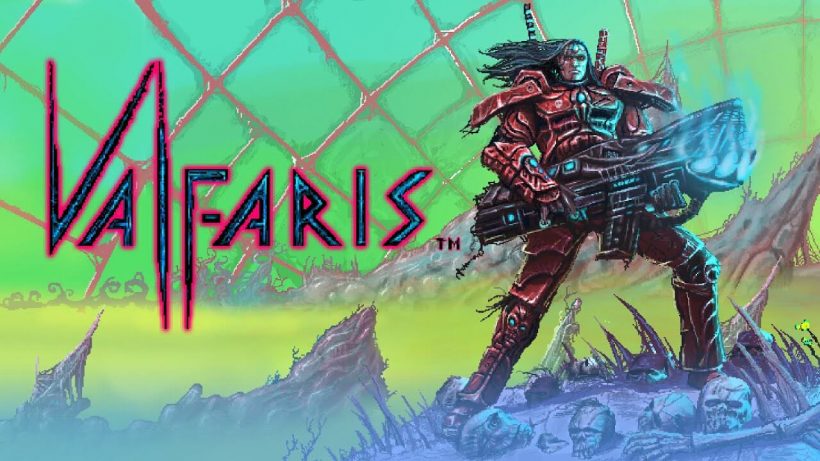 While I’m not usually a fan of judging a game based on what it’s not, given the current state of the indie landscape I feel like it’s warranted in the case of Valfaris.

The second title from Slain: Back From Hell developer Steel Mantis, Valfaris is a punk rock-inspired kill-a-thon side-scroller that feels like a breath of fresh air, precisely because it doesn’t adhere to what’s “hot” right now. For example, is it a Metroidvania? Nope. Does it feature a Souls-style death system? No way. Are levels procedurally-generated? Get the hell out of here. Instead it’s a fun and focused 2D action-platformer that sticks to the traditional tenants of the genre, albeit in a much more polished fashion on Nintendo Switch.

One of the best things Valfaris has going for it is the allure and vibrance of the eponymous fortress. Rendered in beautiful 16-bit pixel art and drenched in luminous colours, you return here one day in search of your lost father, exploring all manner of ill-fated and dangerous locations. Equipped with a litany of inventive ranged and melee-focused weapons, the only way to track down the lost king is by killing all alien life standing in your way and getting to the source of the bacteria infection plaguing the planet. Surprisingly, Valfaris pays great attention to its narrative.

All the in-game weapons are distributed out to you at a sensible pace and fall into one of three main categories: sword, sidearm and special. Your sidearm, as expected, features unlimited ammunition, while your special deals out much more devastation but will sap your energy meter if abused. Luckily, your melee weapon acts as your main way to regain this energy, with slices and slashes always guaranteed to make energy orbs spill out of both enemies and environments. Your energy meter is also what allows you to engage a shield by holding down ZL, which is a great way to defend as well as bounce back alien projectiles. Mechanically, there’s a lot going on in Valfaris, but pulling everything off comes naturally.

If there’s one complaint I do have about Valfaris in terms of how it feels, it has to be the lack of a dash or dodge functionality. You see, so often is it the case that enemies encroach on you in great numbers, testing your ability to get out of a tricky situation fast. And it’s not like a traditional 2D action-platformer in that once you clear out enemies and you’re safe until you move to the next screen. Instead, they’ll just keep coming until you press onward. This isn’t an annoyance in every stage but can lead to frustration during tricky sections. A good solution, therefore, would have been a dedicated dodge or dash button – especially since you’re always having to be weary of incoming fire. The ZR button does nothing, further adding salt to the wound.

Even still, Valfaris offers up so many upgradeable weapons and creative ways to kill using them, that getting from one end of these expertly designed levels to the other is never not enjoyable. All this you do to a pulsing soundtrack of heavy metal guitar riffs, taking down several unique bosses that always forced me to change up my tactics.

Valfaris is an incredibly solid action-platformer with shooter elements that plays perfectly on Switch. The ability to dodge would be appreciated, but the lack of this doesn’t dampen what is otherwise a great time.

In terms of pixelated platformers on Nintendo Switch, Valfaris is a punk-powered riot, introducing enough weapons, enemies and bosses to always keep things fresh and rocking. A dodge function would have helped this to even greater heights.