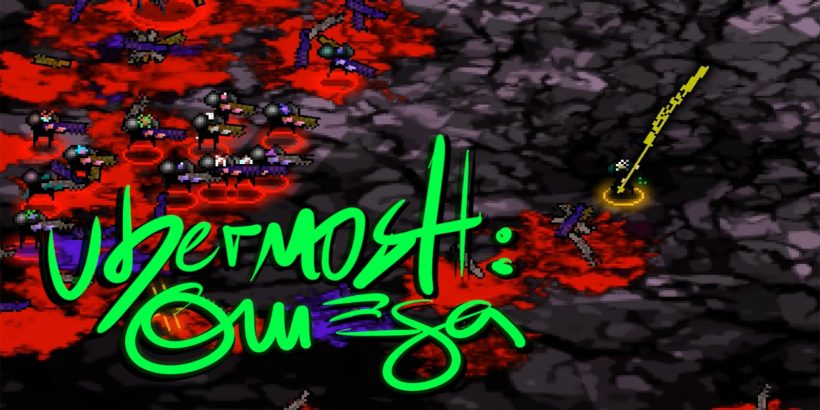 You can say a lot about how the Switch eShop is crowded nowadays, but that over-population comes with at least one nice perk: there are games of styles and sizes for all different tastes. If you enjoy big adventures that will take dozens of hours to complete, you can find them on the Switch. However, if you wish for bite-sized experiences that can be played in short bursts, there are plenty of these as well. With matches that don’t last longer than one and a half minutes, UBERMOSH: OMEGA is a twin-stick shooter that falls perfectly into that category of more compact games. Yet, even with such a short gameplay loop, this is a hard game to get into, and an easy title to drop out from.

If you, like me, have never heard about UBERMOSH: OMEGA before, you may be surprised to learn that this is the eighth instalment of the UBERMOSH series. Prior to OMEGA, this niche franchise was relegated only to the PC environment, where it managed to gather its own small fanbase. If you take a look into what came before UBERMOSH: OMEGA, you may notice that the formula hasn’t changed much since the beginning. It simply has become more chaotic and violent – for the worse.

Pretty much every single title from the UBERMOSH franchise – OMEGA included – is a top-down twin-stick shooter. Different from other titles in the genre, though, such as The Binding of Isaac, UBERMOSH: OMEGA has a more arcade-like approach to its levels and challenges. Instead of providing any sort of progression based on levels with different layouts and unlockable skills, UBERMOSH: OMEGA limits you to a single triangle-shaped arena. Equipped with only your starting loadout (which can include guns, swords, and other things, depending on the characters) you must try to survive as long as you can against ever-increasing hordes of enemies.

With this starting premise, UBERMOSH: OMEGA stands as a very challenging title, where any mistake results in death. In a way, this gameplay loop resembles Akane, but without the same refined pixel art presentation – which is probably the biggest drawback of UBERMOSH: OMEGA. Conceptually, the game aims for a very specific atmosphere, and the industrial soundtrack mixes well with the pressure of fighting hundreds of enemies. However, the game’s pixel art isn’t clean or defined enough for you to follow the frenetic action. To make things worse, OMEGA chooses to display an absurd amount of projectiles, enemies, and corpses all at the same time. Consequently, after the first few seconds of any match, the game quickly becomes a confusing mess in which is hard to follow what is happening.

UBERMOSH: OMEGA doesn’t care to explain any of its rules, either. You can play as any of the game’s different characters, and there is a considerable number of additional perks that you can use to change how each one plays. However, it is entirely up to you to try out the many possible configurations, and discover what exactly they do. This results in some very frustrating attempts, because, more often than not, you’ll die even before getting to try the new loadouts.

If you’re the kind of person that enjoys a very hardcore experience, then UBERMOSH: OMEGA may have something for you. In order to enjoy it, though, you will need to be patient when dealing with its steady learning curve, and look past its messy presentation.

UBERMOSH: OMEGA is a twin-stick shooter that challenges the player to stay alive against hundreds of enemies. To achieve that, though, you’ll need to deal with very messy presentation, in which it becomes hard to even understand what is happening.