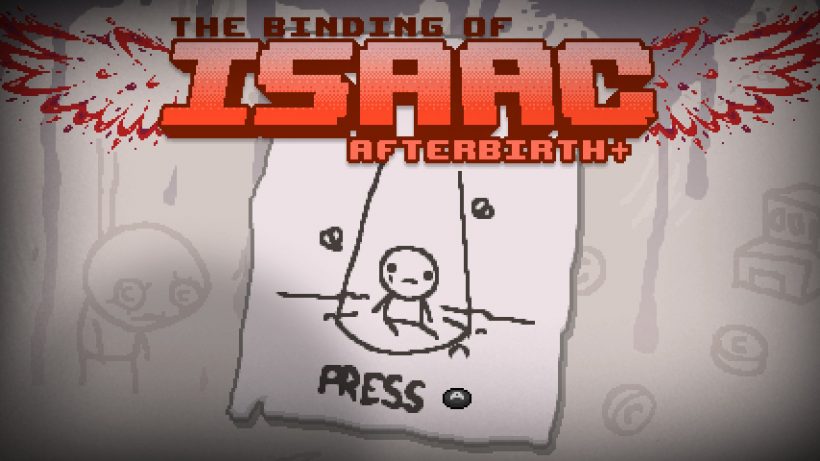 Originally released on Steam way back in 2011, The Binding of Isaac is the lovechild of Edmund McMillen (best known for Super Meat Boy) and Florian Himsl. Initially created as a part of a week-long game jam, it has received multiple updates and incarnations over the years – largely thanks to its hugely positive critical and commercial success. 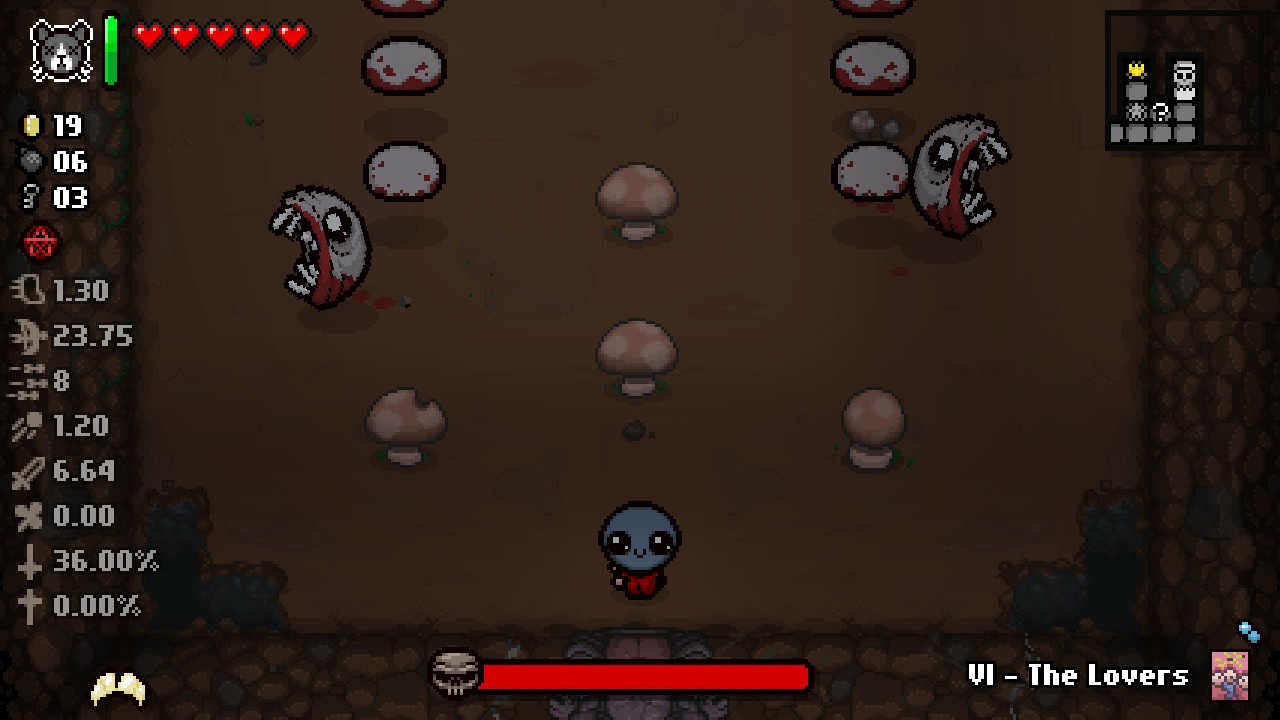 Additional characters, items, chapters, and even modes have been added to the game across these various versions of the game, but it goes without saying that Afterbirth+ represents the most complete, up-to-date version so far. As a collector, I’m particularly impressed by it having received a physical cartridge release, which of course also helps to alleviate any internal storage issues on the Switch.

Controlling the titular Isaac or one of six unlockable characters, players navigate a procedurally-generated dungeon in the manner of a rogue-like game. Generally speaking, combat comes in the form of firing tears at enemies in a twin-stick shooter fashion – but a plethora of power-ups and items can be found throughout the dungeons.

Based loosely on the biblical story of the same name, The Binding of Isaac follows the story of a boy who is attacked by his devoutly-religious mother after apparently receiving a message from God, which leads him to escape to the hellish basement of his home. The game is filled with dark imagery; many enemies are fetus-like abominations, Isaac is seen curled up crying during level transition screens, and… you are literally crying throughout the entirety of the game as a form of attack.

It perhaps comes as no surprise that Nintendo initially rejected a Nintendo 3DS port of the game due to “questionable religious content,” though the Rebirth incarnation of the game did eventually release for the Wii U and 3DS in 2015.

It’d be easy to misinterpret this game as basic and brief, but to do so would be doing it a disservice. There is a very good reason for why this game single-handedly reinvigorated the rogue-like genre. 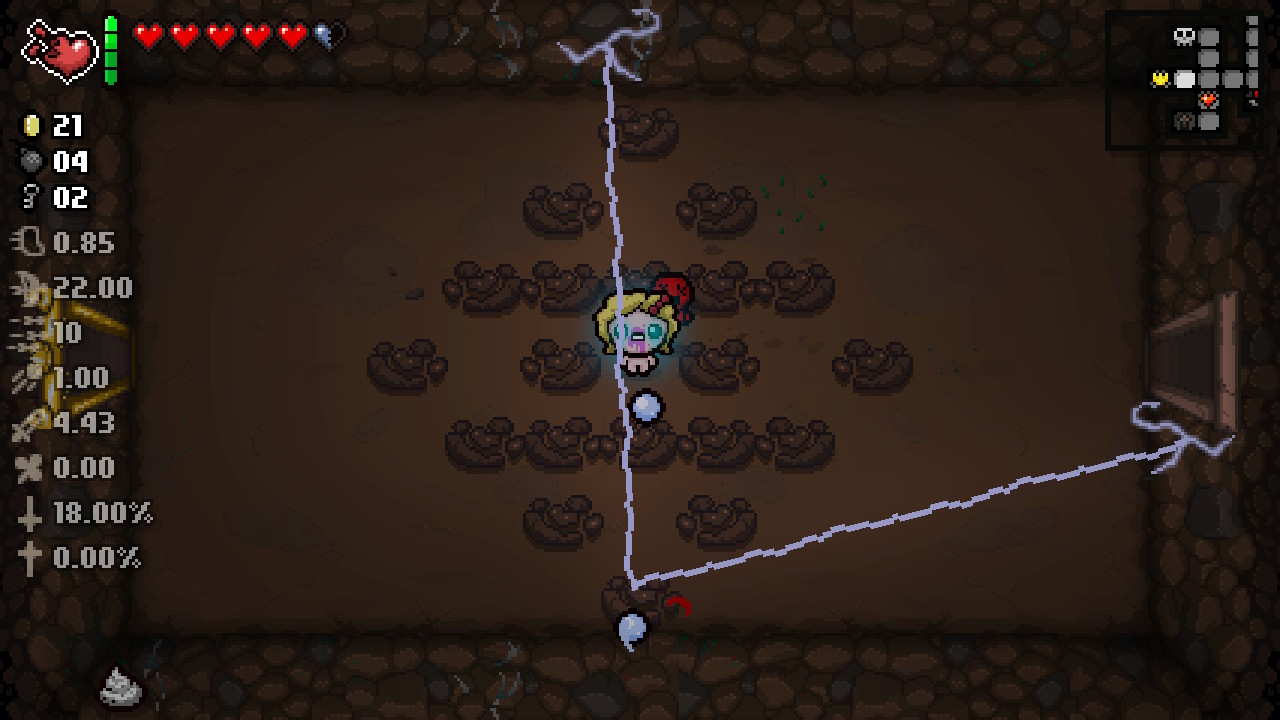 There is an almost unlimited amount of variety here. I still play a run or two of The Binding of Isaac: Afterbirth+ during my daily commute to work, and it’s easily my most-played Nintendo Switch game. There are more than 500 basic items, many of which stack and modify your attacks and the game in creative and interesting ways. When accounting for cards, runes, pills, and trinkets, the amount of items reaches truly mind-blowing numbers.

Variety is this game’s bread and butter. Even after pouring countless hours into it, I’m still coming across new enemies, bosses, and items which are keeping my runs as entertaining now as when I first picked the game up. The replayability here is truly staggering, to the point that I’m astounded by how the developers could feasibly have even come up with so many variables for a dungeon-crawler game.

If I’m honest, I’m not exceptionally skilled at the game. I’ve still yet to unlock all of the characters and endings, and I’m nowhere close to completing a Greed mode run. That said, I’m having more than enough fun playing run after run with the character Magdalene – who can be unlocked after obtaining more than seven heart containers in a single run. Beginning with four red hearts and the Yum Heart item gives me the boost necessary to successfully complete a run.

There’s not much more to be said without gushing over all of the items, which would somewhat ruin the fun of discovering what everything does. If I was pushed to make a criticism, it’s that I’ve frequently had to pull my phone out whilst playing on my commute to check what certain items do. There are simply too many items to remember the effects of every one of them (some of which actually have permanent negative effects), especially after having not played for a period of time.

Yes, I’m aware that sentence seems like a complete contradiction of itself. Discovering the wealth of variety The Binding of Isaac has to offer is its strongest asset, but never truly being able to remember what everything does at any given moment can – at times – be frustrating. 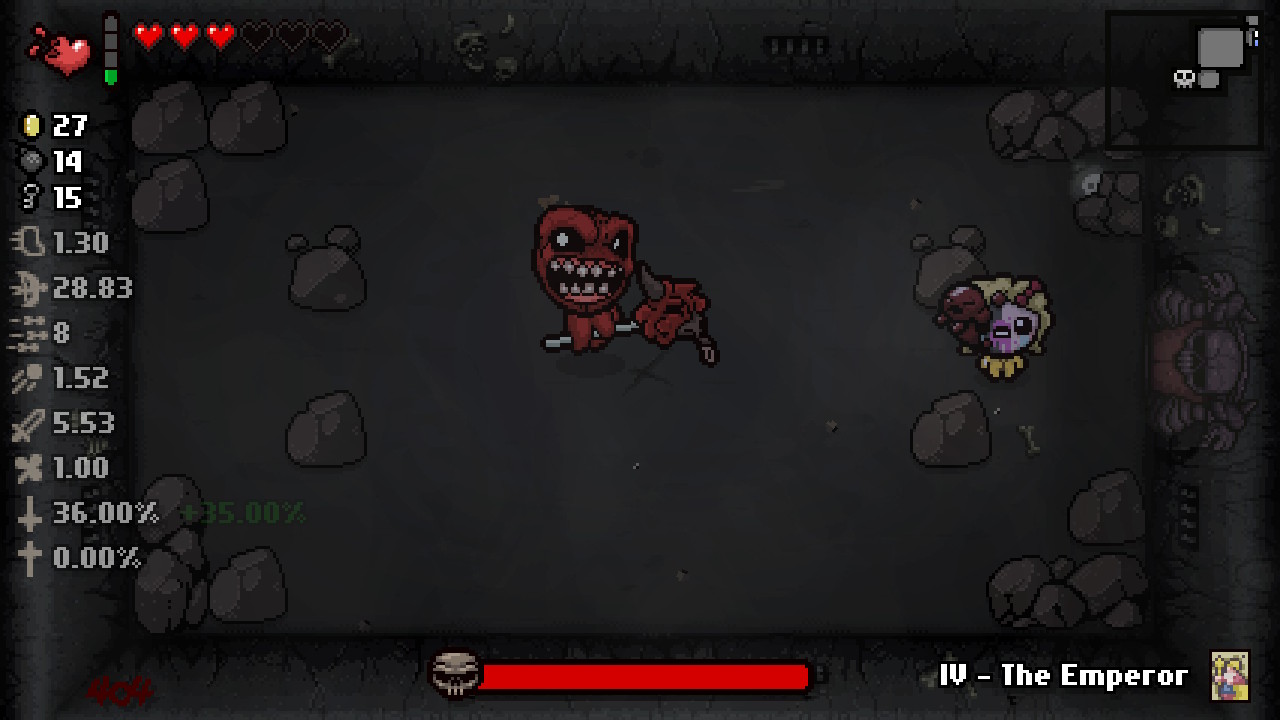 Running at sixty frames per second both in handheld and docked modes, The Binding of Isaac is perfectly suited to the Nintendo Switch. I’ve seen some long-time players express a disinterest in the port – but given the ease of using additional Joy-Con controllers for drop-in co-op, and the wonder that is portability, that really seems a shame. I’ve seen criticism of the controls, but given how comfortable even the default controls are for me with the Joy-Con (and that all buttons can be easily reassigned), it was never a point of contention for me.

Ultimately, this is the perfect package for newcomers, and for experienced players it’s an excuse to update your Switch library with a portable version of a game you already love. The Binding of Isaac: Afterbirth+ is a tough game, but it rewards you with seemingly infinite variety and replayability.

The Biding of Isaac: Afterbirth+

Without a doubt, The Binding of Isaac is the most varied, addictive dungeon-crawler ever made. As the most definitive version, Afterbirth+ is perfect both as a portable game for quick runs and as a docked game for lengthy plays. A must-have for Switch owners.

0 thoughts on “The Binding of Isaac: Afterbirth+ Review”