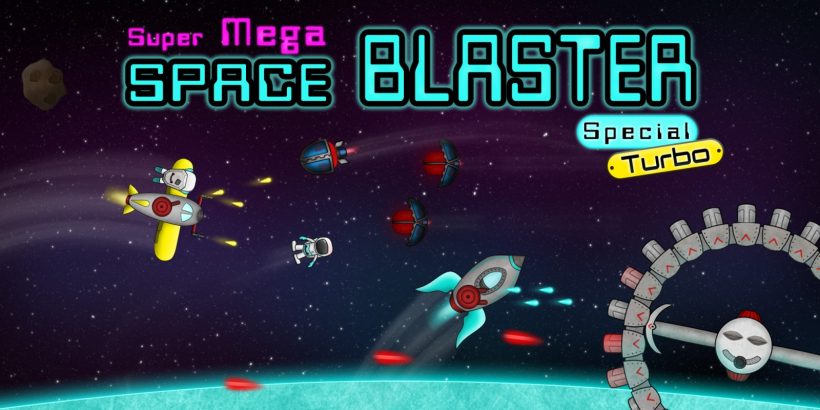 If you were to name your new video game using a random word generator (and New Super Mario Bros U Deluxe was already taken), then you may well be quite pleased with the title Super Mega Space Blaster Special Turbo. But this action-packed selection of words alludes to a video game that doesn’t always achieve the dynamics that are hinted at in its title.

The game cannot, however, be faulted for its generosity. The player takes control of a spacecraft that can be upgraded with all manner of weapons and power-ups. There are multiple game modes to play through, including ‘Survival’ mode in which you use your fuel and ammo wisely to keep alive as the clock ticks, ‘Protect Mother’ where you are required to protect the mothership for as long as possible, and ‘Save The Colony’, in which astronauts are floating helplessly across the screen, awaiting collection and safe return to the rescue ship.

There is a wealth of spacecraft to choose from (which each handle differently), unlockables and challenges to achieve, and options to cater for the solo player or for co-op play with a friend. Coins can be collected in-game to upgrade weapons and more perks, and the ultimate aim in this plethora of play modes is a high score on the online leaderboards. It’s all about the numbers.

There are aspects of Super Mega Space Blaster Special Turbo that dilute the enjoyment. In some game modes, touching the edge of the screen results in instant death, which feels like an unnecessary obstacle that hinders the flow of the game. When the game allows your spaceship to “wraparound” to the other side of the screen (in Save The Colony mode for example) there is certainly more fun to be had.

It’s interesting also to note that there are accelerate and brake buttons, but the tight confines of the play area often mean that the last thing you will be wanting to do is accelerate. For this reason, the game can sometimes seem more sedate than it perhaps intends to be. There can be a lack of dynamism that you would find in other similar 2D space shooters, going right back to Asteroids.

The graphics are bright and suitably retro (the choice of colours reminds me a little of the ZX Spectrum days) if a little lacking in visual variety, and there’s an 80s synth soundtrack to listen to while you navigate your way around the asteroids and other obstacles. The objectives of each game mode is explained clearly, although the backstory to the game is tucked away behind an optional button-press within the menu system.

Even the developers perhaps realised that the story behind the game is superficial enough not to require much attention by the player, which of course is not necessarily a criticism; the history of video games is filled with gaming classics with little or no backstory (where were those Tetrominos coming from in Tetris?!).

In essence, this offering from Bare Knuckle Development Limited offers a lot of content for a low price, and you may find yourself enjoying a particular play mode and sticking with it (my mode of choice being Save The Colony with its freedom to wraparound the screen in flight). Super Mega Space Blaster Special Turbo is generous with its range of spacecraft, upgrades and play modes, but there are some more exciting corners of the galaxy to explore.

What’s in a name? A lot of enticing words, it seems. Super Mega Space Blaster Special Turbo offers a chance to chase those high-scores in space, if you can find a game mode to suit your play style.