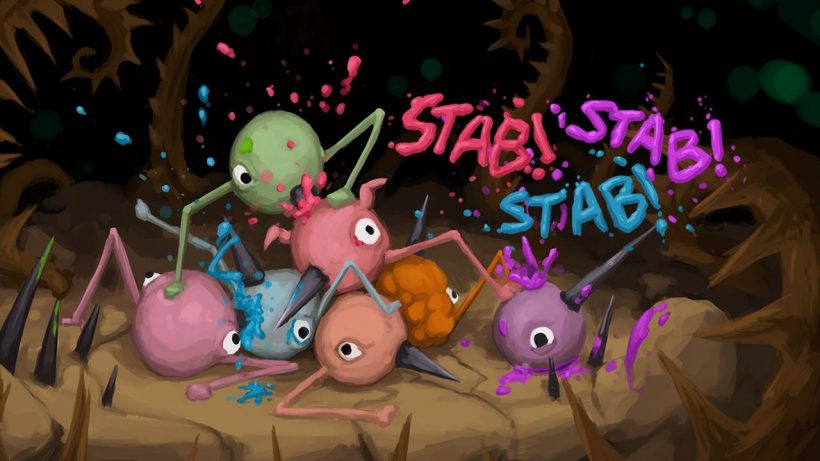 Safety is a big concern for many of us, and while most would settle for a hug or a solid handshake with friends, here comes Stab! Stab! Stab! with the idea “What if I could stab my friends?” A clumsy, physics-based, couch co-op game similar to the likes of Heave Ho, but with an extra streak of violence, Stab! Stab! Stab! from developer Monster Couch is out now for Nintendo Switch, but should you and your friends take a stab at it?

If the name wasn’t enough of a giveaway, in Stab! Stab! Stab! the aim is crystal clear. You’re attempting to stab your friends and the CPU, but to do so you’ll be taking control of one of many spindly-legged ‘Cronenbirds’. Using your beak, along with a few available mutations, try to puncture your pals and gleefully watch them explode. Yet fencing this isn’t, as any attempt at the eponymous crime, manoeuvring your bird or wielding one of the games many wild mutations is met with wild flailing and messy consequences. While the mutations such as wings, longer beaks, and tentacles (I’m still not sure what that one does) add a sprinkle of strategy, it has to be said this game is dumb fun with very little depth beyond a good satisfying stab, but the consistently weird character design, jaunty movement animations, and the constant chaos help to keep the laughs coming.

A Versus mode and a Survival mode is all you have to explore here. Versus is where the chaos works best as you face off against your buddies for some friendly couch co-op with support for up to 8 players, with CPU opponents also available. Survival mode sees you and some comrade Cronenbirds facing off against waves of AI avian enemies until you drop. In both modes the gameplay shines as every movement and stab is hilarious, meanwhile, the wealth of transformations available are all either gross or ridiculous and do a lot to spice up the gameplay. Controls never get complicated however making this an easy game to snap off a Joy-Con and share with a friend within seconds.

Bluntly, though, the simplicity of the game is also a double-edged sword, as it’s accompanied with a noticeable lack of content. While firing up the title for a few rounds was a blast, a lack of unlockable levels, any cosmetic items for your Cronenbirds, or even any scores or leaderboards quickly pierced any enthusiasm I had to return. I’d have loved to know how well I was doing in Survival, and compare scores across the world. Even the presentation is lacking, with a barebones UI throughout and no music to be heard throughout any mode. The birds let out strange grunts and the gore is met with satisfying squelches, but that’s all the sound you’ve got. In my playtime I was also met with a couple of game-stopping bugs, both causing a crash which necessitated closing the game entirely.

Ultimately Stab! Stab! Stab! is a simple premise with concise controls on Pro Controller or Joy-Con, meaning you can share the gory fun with friends in seconds. The title might be all the instruction you get, but it’s truly all you need to start stabbing and unleash splashes of multicolour bird flesh to hilarious results, but a lack of content and some serious bugs took a serious blow to our enjoyment.

Stab! Stab! Stab! has truly hit the mark with it’s gory, simple couch co-op mayhem, but the lack of content and some serious bugs are a stab in the back to any fun we might have had.