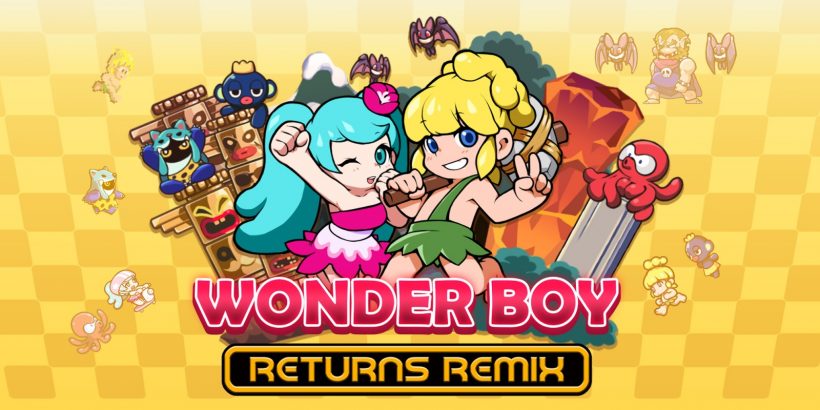 It would take video game historians far more space than this review allows to explain the deep and convoluted history of the Wonder Boy series. However, that’s all irrelevant when it comes to Wonder Boy Returns Remix, which is simply a graphically-updated port of the original arcade platformer where it all began.

Apart from the unusual ‘cave-boy’ character, Wonder Boy the game is remarkably familiar and straightforward in its overall setup: eight stages (one has been added here to the original seven) with four levels on each. Each level consists of classic — and I mean classic — platforming action: jumping, flinging axes, avoiding hordes of enemies, and generally progressing from left to right through mostly vertically-challenged landscapes. The levels are a decent length too, each having a generous four checkpoints to help tame the overall challenge.

Several things immediately stick out: the large size of the main character, and slipperiness on the ground being the main two. Then there’s the very strange mid-air momentum: it’s fine when you’re moving forward, but let go of that right arrow and Wonder Boy comes to a very abrupt halt. It makes early gameplay frustrating, but once mastered, becomes a powerful mechanic. The skateboard, too, behaves erratically initially but practice transforms it into a useful and genuinely fun alternative to running.

Foes come thick and fast so there’s a temptation to spam the throw button which adds a significant shoot-em-up vibe to the overall play. Combined with the rapid timer — which can be replenished by collecting fruit, another nice touch — it makes for a frenetic pace. But it’s one that feels rewarding when you manage to fly through a level successfully dodging all and sundry. Personally, I feel the combination works, but it might not be for everyone.

The HD cartoon style is quite in keeping with the two other modern Wonder Boy games available on the Switch: Wonder Boy: The Dragon’s Trap and Monster Boy and the Cursed Kingdom. Whilst this is a much lighter offering than either of those titles, it’s also far more affordable.

However, there are still one or two problems. The overall level design is not exactly best-in-class: unlike even the earliest Mario games, these levels are far from memorable. However, the player’s memory is often called upon, whether it’s to recall exactly which identically-looking platform is the one that moves when landed on or the precise moment an enemy is due to appear. The latter is most frustrating when something runs full-pelt into you from behind for an instakill — this sniping feels incredibly unfair and is all too common.

At the end of each stage is a boss, but this must be one of the most phoned-in bosses in all of gaming. It’s the exact same boss more-or-less every time with a basic projectile attack that takes little skill to avoid. Whilst the final incarnation is slightly more challenging, by the time you get to it, it’s just become a boring repetition.

Despite these flaws, the strength of the main mechanic is enough to deliver a pretty strong platformer. I would’ve liked a lot more in the overall package — at the very least, it’s difficult to forgive the lack of an original 8-bit graphics mode — but the fact that this remains a pretty playable game 35 years after its original release is testament to the core mechanics and the one or two inventive touches that are present.

Wonder Boy Returns Remix holds up impressively despite a number of flaws that mostly serve to inflate the challenge. This remix polishes down some of the harder edges and slaps a decent lick of paint on top.