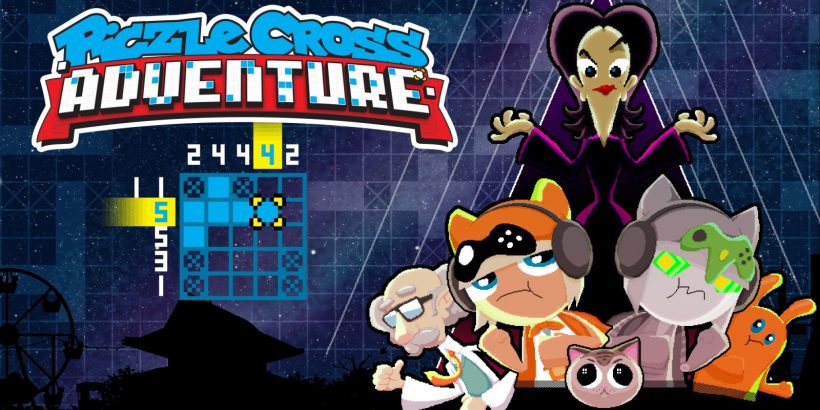 I’m a big fan of Picross games, having sunk several hundreds of hours of playtime into them.

It was never in doubt that I would at least enjoy Piczle Cross Adventure. Still, it’s very easy to plonk a bunch of puzzles together and call it a day, making everything else surrounding the package all the more important. The presentation, soundtrack, options, controls. All these things add together to decide if a Picross game is good, or great. I feel safe saying that Piczle Cross Adventure qualifies as great, if not one of the best Picross games I’ve had the pleasure of playing.

Before diving into all the juicy goodness Piczle Cross Adventure crams on top of standard Picross, I should probably explain what makes Picross puzzles so great in the first place. You’re provided with an empty grid and a set of clues for each row and column, indicating where you can fill in some blocks. Through a process of maths, logic, and elimination, you slowly fill in this grid until you’re left with a pretty picture at the end. Figuring out where the squares can’t go is just as important as figuring out where they can. It has a lot in common with Sudoku or Kakuro, two other logic-based number puzzles I frequently enjoy.

Picross puzzles are by far my favourites though. Often you’ll have only a couple starting blocks you can figure out, which will spiral into solving the entire puzzle. The satisfaction you can derive from flawlessly filling in a previously empty grid to conjure up a recognisable artwork using nothing but logic and persistence is hard to come by. That was a mouthful… There is another more abstract way of solving puzzles too, which is identifying the object before you’ve completed it, and working from there. If something looks like a fish, maybe you want to try and make a fin while fitting the clues. Not every puzzle has to be solved in the exact same way.

But, not satisfied with just being superb puzzle games, the Piczle series has always gone out of its way to add charming characters and funny cutscenes into the mix. Adding a little bit of context to the grids you’re filling in goes a long way towards making the game memorable. Piczle Cross Adventure steps it up a notch by adding a full-fledged over-world on top of the standard Picross-style puzzles. Think of something like The Legend of Zelda‘s top-down hub worlds. Complete with retro pixel-art aesthetic and all. CRT filters and scan-lines can even be turned on if you like.

The story is in line with previous entries in the series; it’s silly and nonsensical. Dr. Mona Chromatic decides that she’s tired of colour, and tries to turn the whole world monochrome. Fortunately, Score-chan starts repairing everything at about the 300 object mark (making for 319 total puzzles). The over-world serves as a level select, with a few items and secrets hidden away to guide your exploration. Some secrets were a little too well hidden, only popping up when I stood right next to them, but apart from that it was easy to navigate and find the way forward.

And I have to say, the range of themes crammed into the map is really impressive. Not to mention the fact that every puzzle matches the area it’s in. Completing a puzzle plops the item back into the world, so by the time you’ve completed an area it’s gone from a barren space to teeming with colour. It adds an extra layer of satisfaction to the irrefutably solid nonogram puzzles. It doesn’t hurt that the pixel art looks fantastic, too.

I’m pretty certain that I’ve never played a Picross game with more control options as well. Piczle Cross Adventure has so many things you can tweak for comfort and accessibility, I don’t think I could list them all and keep under word count. If there’s something you don’t like, you can almost certainly change it to suit your needs.

The only place it fell flat for me was in the soundtrack. While it’s pleasant enough and has some absolute bangers in there (just wait till you find the cave) I was disappointed to find that some tracks were re-used between areas. I would have loved a unique track for each location, since I ended up listening to every track on loop for a long time while puzzle-solving. It took me over ten hours to complete this game, and I’m pretty quick when it comes to Picross puzzles at this point.

Overall, Piczle Cross Adventure is undoubtedly one of the best Picross games I’ve come across, and stands tall alongside even first-party Nintendo Picross titles. Whether you’re a Picross veteran or a nonogram noob, this one is definitely worth your time.

Piczle Cross Adventure goes above and beyond to add a fresh coat of paint to a stagnated Picross formula. If you like nonogram puzzles, adorable characters and options galore, you cannot go wrong with this Piczle-perfect puzzle-packed package.