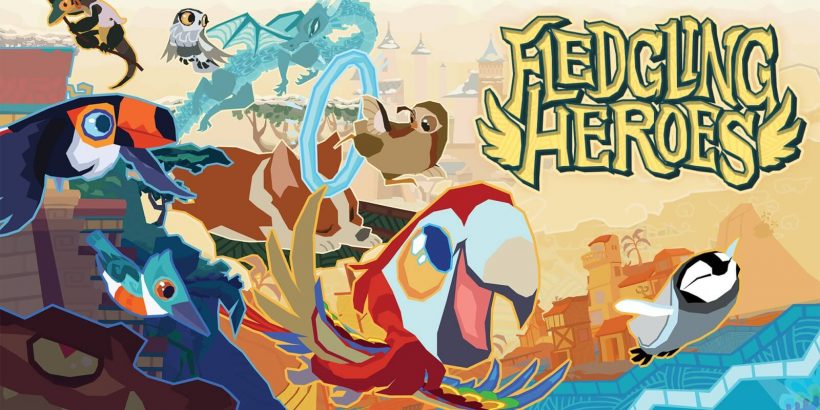 Despite their inherent simplicity, games that revolve around just one tap or button press don’t need to be bad.

The Flappy Bird phenomenon arguably wasn’t proof of this, I’ll admit. Now, though, Fledgling Heroes has arrived to help put this right, attempting to do the side-scrolling “flap ‘em up” genre justice on Nintendo Switch by focusing on colourful characters, a vibrant art style and fun but fair level design. It’s a bite-sized experience, but Fledgling Heroes is a charming way to pass the time.

Much like other games of this ilk, Fledgling Heroes tasks you to work your way through a Mario-esque style overworld, moving through each level well enough so that you’re able to press on. In this case it’s the golden feathers you’re after, which when collected will let you unlock further stages. Most of these you just pick up while swooping through the various obstacle-laden challenges. Others, meanwhile, are only rewarded should you complete stage-specific objectives, like hitting X number of lizard enemies or outracing a dragon within the given time limit.

Fledgling Heroes never tries to be anything that its not, leaning into to its straightforward nature and making its incredibly simple gameplay feel as polished as possible. Tapping A or the Nintendo Switch screen itself will see whatever bird character you’re playing as flap its wings, and I’d be lying if I said that it wasn’t responsive. Navigating levels is pretty basic because of this, but none never last more than thirty seconds so you’re constantly encouraged to replay them to scoop up all the golden feathers or achieve a quicker time. In most instances it’s actually impossible to complete all a level’s objectives with just one run through.

While you start out this journey as a parrot flying through the sky, it isn’t too long before you’re introduced to other playable characters that don’t handle any differently but come with their own style of levels. The penguin, for instance, can travel underwater, and as such you have to bob and weave your way around such things as jellyfish and sharks, all while making use of new power-ups that are added in gradually. Before you know it, you’re boosting into enemies rather than liberating them. And if you’re a perfectionist like me, you won’t be able to press on into you 100% each stage.

As well as just golden feathers, Fledgling Heroes has a secret weapon up its sleeve in the form of a level creator. Early on in the story you’ll unlock what’s known as the lab, where you’re encouraged to be creative and try your hand at making your own level – a la Super Mario Maker. Admittedly, like most other aspects of the game, the tools here are fairly non-revolutionary. However, it’s still nice to see a cross-pollination between the campaign and creative mode, in that some items you collect in the story mode can then be made use of in the stage creator. And because Fledging Heroes was previously exclusive to Apple Arcade, there’s already plenty of user-created levels to jump into.

Fledgling Heroes is the prime example of a side-scroller that establishes what it wants to do and firmly sticks to it. Some might argue that this makes it uninspired, but clever ideas like including a level creator mode and giving you extra reasons to replay story stages helps make this a complete package. You’ll be flapping to your heart’s content.

Fledgling Heroes takes the blueprint of what a colourful side-scroller should be and runs with, polishing the core flapping mechanic so that it’s always fun and bundling in some creative extras.