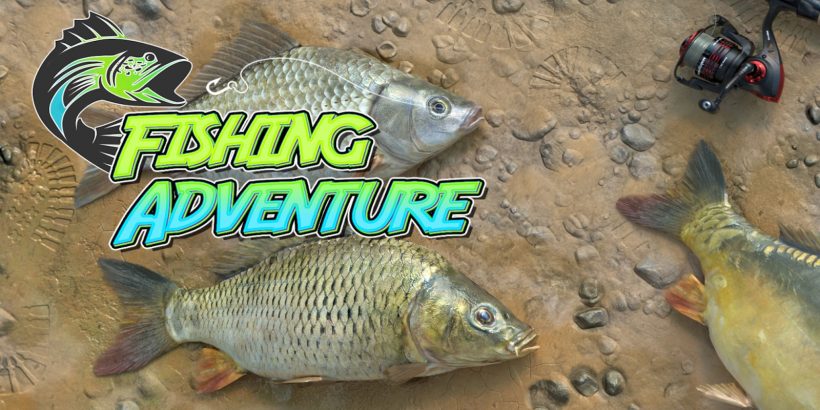 Fishing always looked like a relaxing and atmospheric hobby, but my nerdy habits mean going outside is never really on the cards.

Yet now, thanks to the latest effort from Ultimate Games, I can live out my fishing dreams by playing Fishing Adventure in my bedroom whilst wearing nothing but my underwear. Not a tackle in sight. But is this fishing simulator a true catch of the day? Or nothing but a flop?

In terms of gameplay, it’s split into two modes, casting your line in either the free fishing ‘Play’ mode or beating challenges and earning cash or gear in the ‘Quests’ mode. In ‘Play’ you can choose from peaceful fishing spots in Poland, Germany, Haiti, and more. Starting in Poland you will get to grips with the simplistic fishing controls, either using regular controls to cast and reel in your fish or some very rudimentary motion controls. Soon you’ll be reeling in a few whoppers and earning the cash and experience you need to progress.

See with every fish you catch you have the option to either sell it for cash or release it for EXP, an interesting balancing act as while you’ll need money to unlock better fishing gear, you need to be a high enough level fro the more capable pieces of equipment you will need to catch bigger and better fish. Sadly progression in this mode is very tedious, as the money you earn initially being so slim, you have to truly grind your way through barrels of fish just to earn enough to get any decent equipment and start fishing seriously.

However, the ‘Quests’ mode offers a series of challenges with cash and EXP rewards for each. These are also the way you unlock each new location, after completing five increasingly challenging quests at the previous locale. Thankfully these can be played one straight after another, with each successful quest giving you a prompt to play the next immediately. If you are running out of time to complete a quest the game even pops up just before the deadline and offers an extension in exchange for some cash. Yet while these conveniences made working through quests to unlock locations much more convenient, they were still ultimately bogged down by the lacklustre fishing mechanics.

It does bear mentioning however that the “adventure” part of Fishing Adventure is somewhat of a misnomer. Other than hopping between locales and fishing with poor controls, there is nothing to be found here. No story tying locations together, no characters to interact with, not even any music to add to the calming rain and atmospheric noises of each fishing hole. Menus and other UI are static images with little feedback to any action. Locales are also sadly underwhelming, with some mildly impressive water effects and pleasant rain sounds tarred with frankly awful foliage and character models. The player’s visible arm looks like something out of DOOM (not the new one), and you’ll certainly be staring at it enough to notice.

Nearly everything you’d want for a fishing game is here in Fishing Adventure and for some that may be enough. It’s certainly atmospheric and competent enough that avid anglers could happily let a few hours slip by. But with loose, boring fishing mechanics and a dull world to explore, anyone with a passing knowledge of video games will struggle to catch more than a couple of carp without getting bored.

While fishing enthusiasts could maybe wring some enjoyment out of Fishing Adventure, the dull mechanics and lacklustre presentation make this a flop for anyone else. Awful background graphics, repetitive gameplay and a general lack of polish mean I’d rather catch a cold than have to play this again. Don’t take the bait.